The Floridian who gave birth to Jude Law's daughter in September after a fling with the actor shows off the baby girl, named Sophia, on the cover of Hello! magazine. Samantha Burke, 25, tells the magazine that Law, currently performing 8 shows of "Hamlet" a week on Broadway, has yet to meet the baby or send a gift.

But Burke thinks the baby, who DNA tests proved is Law's fourth child, looks like her famous father.

Burke tells Hello!, "'Her features are more like Jude's. She has his chin and nose, and she does a little pout that I notice that he's done before. I think her eyes are more like mine, though.

"You can't always tell when they're so young but they don't have that big, glassy look that his do - mine are a little smaller and more like hers.'

As for if and when he will meet Sophia, Law, who is in "Hamlet" through December 6, Burke said,
"There are no plans for it to happen at the moment, but I know he's busy." 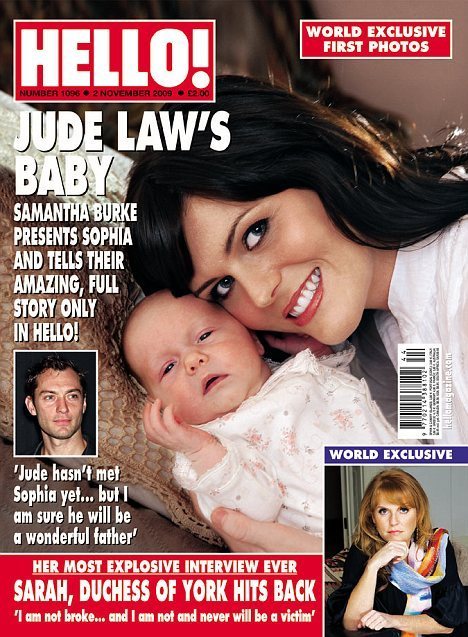