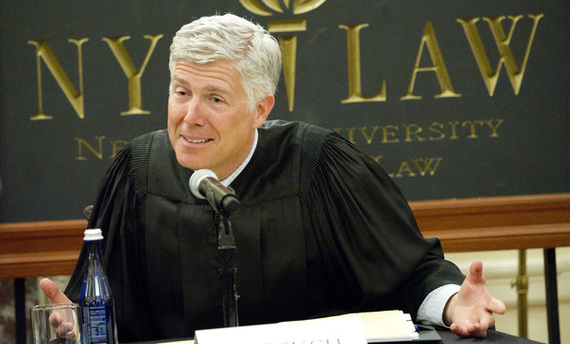 Love him or hate him, President Trump delivered on his word to appoint a Justice to the Supreme Court who has a strong record of adherence to the Constitution when he nominated Neil Gorsuch to fill the vacant seat of the late Antonin Scalia.

There is no debating Gorsuch's credentials: Columbia graduate, J.D. from Harvard Law as a Truman Scholar, Appellate and Supreme Court Clerk, and a decade as an Appellate Court Judge.

During his distinguished career, Gorsuch's intellect and judicial record have both been shown to be first-rate.

Even the country's foremost liberal legal minds agree on this.

Famed Harvard Law professor Alan Dershowitz told Newsmax that he thinks "Trump was smart to pick someone who was highly credentialed and hard to oppose," adding "he'll be hard to oppose on the merits."

His fellow Harvard Law professor, Laurence Tribe, says, "Gorsuch is a brilliant, terrific guy who would do the Court's work with distinction. He is and he would."

Along with those legal bonafides comes what Judge Andrew Napolitano - during an appearance on Fox News' Tucker Carlson Tonight - called a "dose of skepticism" about government power, which should be very pleasing to those who are afraid of Executive Overreach during the Presidency of Donald Trump.

But don't just take Judge Napolitano's word for it.

The Washington Post's Daniel Drezner says, an ardent Trump critic, says, "Whatever you think of his legal philosophy, Gorsuch seems both willing and able to rule against any of Trump's unconstitutional power grabs."

The Washington Post's Radley Balko, one of the most prominent civil liberties reporters in the country, says, "Willingness to stand up to executive power is rapidly becoming most important trait in a justice. Love to see that analysis of Gorsuch."

This is, indeed, an important trait in ANY potential SCOTUS Justice, but it should help ease the minds of those who are so terrified of President Trump abusing his power.

Those who reflexively oppose Judge Gorsuch should also understand that rather than demonizing minorities, he protects their rights.

Neal Katyal, who was Solicitor General under President Obama and is currently a Georgetown Law professor, argued in a New York Times op-ed that liberals should back Gorsuch because he has, "no doubt that if confirmed, Judge Gorsuch would help to restore confidence in the rule of law. His years on the bench reveal a commitment to judicial independence -- a record that should give the American people confidence that he will not compromise principle to favor the president who appointed him."

Katyal goes on to describe De Niz Robles v. Lynch and Gutierrez-Brizuela v. Lynch, both cases where Gorsuch ruled AGAINST federal power on the grounds that the government was attempting to "retroactively interpret the law to disfavor immigrants."

Timothy P. Carney at the Washington Examiner points out that Judge Gorsuch ruled to safeguard the religious liberties of two inmates in two separate cases - Native American Andrew Yellowbear and Muslim Madyn Abdulhaseeb - on the grounds that their religious liberties were being violated.

Carney adds that, "with his nomination of Gorsuch, Donald Trump really has provided a reprieve to many who feel threatened by state power -- including many you wouldn't even expect."

Unquestionably, Dershowitz, Tribe, Drezner, Balco, Root, and Katyal all fit into Carney's category of "many you wouldn't even expect."

I look forward to watching him ensure that the laws of our great nation are properly upheld and equally applied to all Americans.