WASHINGTON -- On Monday, Alabama became the 37th state where same-sex couples could legally get married. The person who paved the way for this historic moment was Callie Granade, a judge on the U.S. District Court for the Southern District of Alabama who ruled that the state's ban on marriage equality was unconstitutional.

Granade's ruling put her at odds with many officials in the conservative state. State Supreme Court Chief Justice Roy Moore has directed probate officials to refuse to issue marriage licenses to same-sex couples, despite her ruling. So far, according to the Human Rights Campaign, 44 out of the state's 67 counties are listening to him.

For some, Moore's stand against equality for same-sex couples has evoked the image of former Gov. George Wallace (D), who famously tried to stop black students from enrolling at the University of Alabama, despite a federal court order to desegregate.

It may be only fitting then that now, standing on the other side of Moore, is Granade, the granddaughter of a civil rights-era judge who stood up to the white segregationist South during the 1950s and 1960s and helped advance equality for African-Americans. 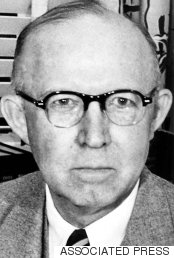 Richard Rives, Granade's grandfather, was one of the judges known as the "Fifth Circuit Four." These judges on the U.S. Court of Appeals for the Fifth Circuit issued decisions that were crucial in breaking down segregation barriers in the South. Writing in The Nation in 2004, College of Charleston Professor Jack Bass said they "fleshed out the bare bones of [Brown v. Board of Education] and transformed it into a broad mandate for racial justice."

"A colleague on their court, Mississippian Ben Cameron, labeled them 'The Four,' a clear reference to the Four Horsemen of the Apocalypse," wrote Bass. "Cameron considered states' rights 'the bedrock of our constitutional system' and believed his fellow judges were destroying the social order of the world he knew. Many white Southerners felt the same way about 'The Four.' Friends shunned them. Their wives received threatening phone calls at home. But the judges never complained."

Rives wrote the decision for the 2-1 majority in the 1956 case Browder v. Gayle, finding segregation on buses unconstitutional under the 14th Amendment.

Granade, as AL.com has noted, considers Rives her "personal hero." During her confirmation hearing in 2001, Granade said she considered herself, a judicial conservative, to be following in the footsteps of her grandfather.

Granade was nominated to the seat by President George W. Bush in 2001 on the recommendation of Alabama's two Republican senators.