The young pig at the outer edge of the immobile transport truck bearing him to slaughter was so terrified and parched that his mouth was foaming. But when the truck stopped at a traffic light and animal activist Anita Krajnc thrust an open water bottle through a ventilation opening, he raised his snout and slurped until the traffic light turned green and the truck revved up and veered around toward Burlington, Ontario's Fearman's Pork Inc., the slaughterhouse across the road. 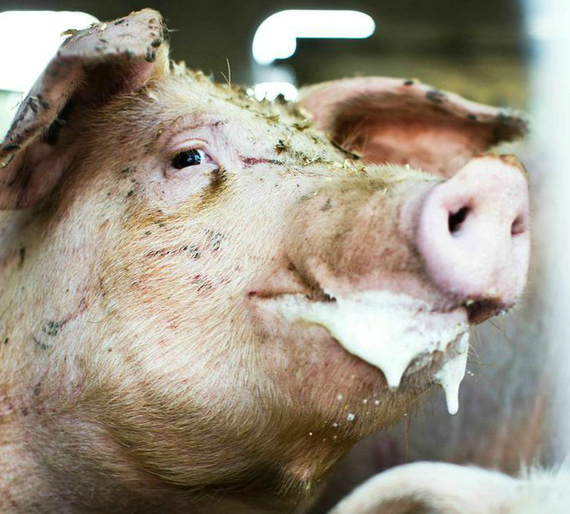 This happens often during Toronto Pig Save slaughterhouse vigils, and other activists also tip water bottles into the gasping mouths of frantic pigs. Twice, I have been one of them, holding out my water bottle and crooning through tears the mantra that encapsulates our mission as well as our despair: "We see you. We're trying. We're sorry. We love you."
What was different and unexpected on the June 22, 2015 vigil was that the truck driver, Jeffrey Veldjesgraaf, stepped down and, in a heated exchange captured by a Toronto Pig's Save videographer, asked Krajnc to stop giving water to the pigs he was transporting to their death. Krajnc refused with a biblical reference to giving water to the thirsty. "Have some compassion!" she urged.
Veldjesgraaf snapped, "You know what, these are not humans, you dumb frickin' broad," and later added, "You do it again and I'll slap it out of your hands." 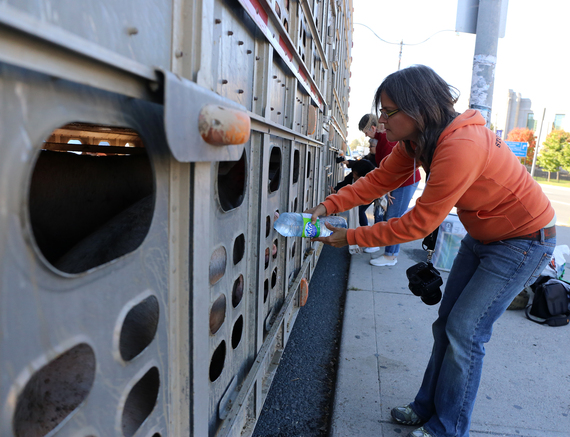 But in face of Krajnc's defiance to his threat to "call the cops" - "Call Jesus!" she retorted - Veldjesgraaf climbed back inside the truck and hauled his cargo of hundreds of pigs to slaughter at Fearman's.
The next day, the pigs' owner, Eric van Boekel of Van Boekel Holdings Inc., filed a complaint against Krajnc and on September 9, 2015, she was charged with criminal mischief. Her trial began a year later, in Burlington's Courthouse, with van Boekel and Veldjesgraaf's testifying. On October 3rd, the proceedings were devoted to Krajnc. The courtroom was so packed that the judge invited journalists to move into the empty Prisoners' Dock, which he said he'd temporarily dub the 'Press Dock,' and when every seat was filled, permitted people still waiting to enter his courtroom to sit on the floor accommodate the overflow crowd that included Ingrid Newkirk, President of PETA, the world's largest animal rights organization.
In her testimony, Krajnc confirmed the accuracy of the prosecution's description of what happened on June 22, 2015. Then, in response to her lawyer James Silver's questions, she gave detailed accounts of Toronto Pig Save, which she co-founded in 2010, and of the burgeoning Save movement it spawned, that now numbers more than fifty groups in Canada, the U.S., U.K. and Australia.
Krajnc could not save the young pig who sipped her water, but she transformed her legal defense into a powerful platform to not only justify her small act of mercy but also to elaborate on Toronto Pig Save's mission. She identified herself as the group's full-time organizer and defined its three goals: to promote a non-violent vegan world, to promote activism, and to promote a cultural shift so that everyone who sees suffering of any sort bears witness, thereby helping animals, people and the planet.
Culturally savvy, the Save Movement uses social media - Facebook, Twitter, Instagram, websites, Vimeo and YouTube - to show the realities of animals going to slaughter and to connect supporters. A Save Response Team is mandated with finding homes for animals who fall off slaughter trucks and are reprieved. There are a plethora of related groups: vegan outreach, poster and postcard campaigns, climate/vegan groups, an SOS squad that issues placards and distributes PETA and vegan starter kits, and a program that pays students $10 each to watch the documentary Earthlings. Dozens of virtual headsets, recently purchased, are being distributed worldwide to render the viewing experience more authentic and compelling.
And, at the heart of the Save Movement are slaughterhouse vigils where supporters bear witness to the terrible suffering of doomed animals being trucked away into local slaughterhouses. At Fearman's Pork Inc., Krajnc testified, ten thousand pigs are slaughtered daily, and videos of pigs being slaughtered by the same methods used at Fearman's and elsewhere were entered into the trial records as Exhibits relevant to her defense. 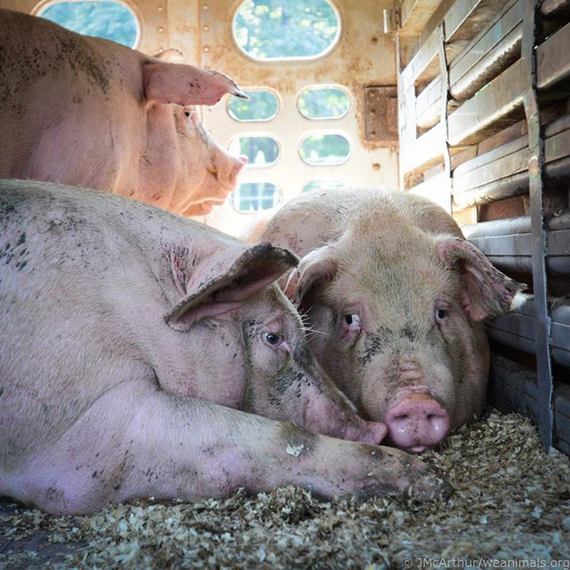 "We want everyone to see what we see," Krajnc said. "As Leo Tolstoy said, "When the suffering of another creature causes you to feel pain, do not submit to the initial desire to flee from the suffering one, but on the contrary, come closer, as close as you can to her who suffers, and try to help her."
The Save Movement is also guided by the reasoned non-violence of Mohatma Ghandi and Martin Luther King. These two icons also strove to change the system that permits the violence afflicted on other creatures, and to go to the darkest sites of injustice and to bear witness there. 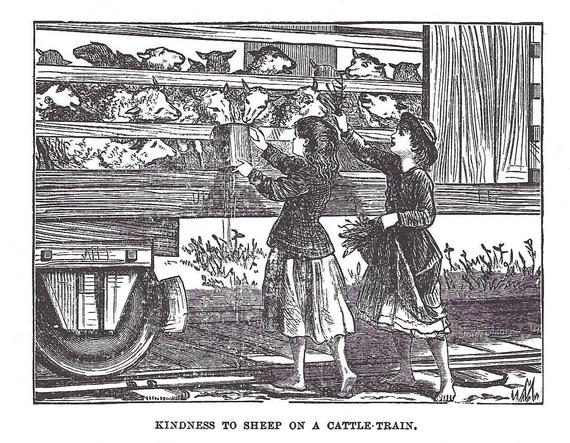 In 1870, popular American author Louisa May Alcott (Little Women) described with words and illustration how two young girls offered buckets of water and freshly picked clover to distressed and panting sheep on a cattle railroad car, an act of compassion that deeply touched her. A century and a half later, in Canada, Anita Krajnc risks jail time for performing that same act of compassion.
The trial continues on Nov. 1st.