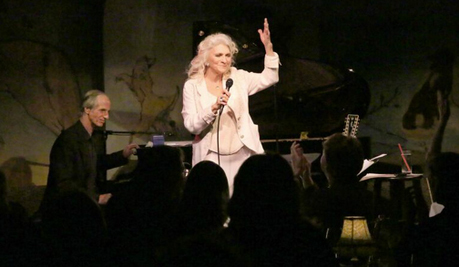 Beginning with her first song, "Open the Door", Judy Collins had her audience at the Café Carlyle on the opening night of her two-week run in thrall. A performer for 56 years, her crystalline sound, whether she's accompanying herself on acoustic guitar or at piano, rang clear. Not a glass clanked, nor dish rattled. And that's for the intimate supper club the Café Carlyle epitomizes. The last time I heard her sing "Amazing Grace", she commanded the stage at a ballroom in the Hilton with 2200 guests to the same effect of rapt euphoria. There's nowhere else you'd wish to be than with her singing for you.

Collins, a vision in white, sprinkled her set of favorites with some delicately suggestive gossip about the songwriters she was covering: wearing a terry cloth robe, she listened as Bob Dylan composed "Mr. Tambourine Man"; Joan Baez wrote "Diamonds and Rust" about Dylan (he was reportedly not nice to her); and, Stephen Stills' (with Crosby and Nash) "Helplessly Hoping" (they had a romance; he wrote "Suite: Judy Blue Eyes" for her). Leonard Cohen, whose songs she made famous for years, suggested she write her own: and she did, and performed "Arizona" and "Since You've Asked".

Collins paid homage to Stephen Sondheim, with "No One is Alone" from Into the Woods, and "Send in the Clowns," from A Little Night Music, and to her father with her own "My Father." Born in 1939, the same year as Wizard of Oz, she said her mother named her for Judy Garland to her father's claim that Judy came from the Bible's Judith, the one who cut off the head of Holofernes.

This was her eighth year at the Carlyle, and so with grace, and after thanking her music director and accompanist Russell Walden, and her partner Louis Nelson, she acknowledged the head waiters, Tom and Errol, and Lisa, the maître d'. She must have felt, as we all did in the hush of that room, at home.