"Recipes do not make food taste good, people do."

Judy Rodgers wrote that line in the most important 20 pages written in an American cookbook that I am aware of to date. She was certainly not the first to offer similar advice. I grew up listening to chefs on TV tell the viewers to "taste, taste..." I wasn't watching, I was simply overhearing as my younger sister Rebeca eschewed afternoon cartoons for the local access cooking shows. But the idea stuck nonetheless. "Season to taste, check for taste, adjust to taste... etc." at the end of any decent recipe written before or since. I add it to my own when asked to provide one.

Judy wrote about the concept simply and sternly for a number of pages. The Zuni Cafe Cookbook is a collection of flawless recipes, each and any one equally suitable for a friendly dinner at home or a menu downtown. Judy poured out her process, and catalog into that seminal modern classic. But those first twenty pages, dubbed "What to think about before you start and while you are cooking" are uniquely inspired. I understand it took her a decade to complete the text. I have to wonder just how many of those 10 years were spent on those early 20 pages.

"Tasting, looking, smelling , and feeling as you cook is not difficult. Adjusting for what you taste, or don't taste, need not be intimidating." That's Judy again. From this paragraph I learned to learn. The day I read this I stopped tasting for something finished and began to taste along the way. Not to see what was wrong, or unfinished, but to taste the process. To pay attention all the way from raw to complete.

Another paragraph down, a new (to me) technique is introduced. In order to adjust something for taste, or to experiment, remove it from the pot! In a separate vessel, "tinker with a small amount of it." Go ahead and guess now. That is Judy's advice at this point. And what perfect advice. Try something. Try again. Write it down. The process is working. We're cooking. Confidently.

"This technique prevents big mistakes when you have little experience, but I still use it regularly when I cook." That's where Judy sold me. I was reading this chapter for what had to be the third of fourth time and that was what I needed to hear. I was about to be in charge of a kitchen, its recipes, its staff... its everything, for the first time. And I was scared.

Judy went on. Next she described the proper time to salt. Which is quite a while before cooking most of the time, by the way. How to measure. Choose tools. Cooking vessels. On and on, and on.

As a restaurant chef I mentor the career path for a half dozen or so other budding professional cooks at any time. For that first year, I recommended each cook sit down with this 20 page introduction to modern cookery the day I offered them a job. One of them called me from the bookstore and could not seem to remember which book it was, I sent her a picture of the cover.

At a time that I was just a little unsure. Not quite ready to trust myself, but forced to anyway. I turned to The Zuni Cafe Cookbook for advice that anchored my cooking, in a restaurant an entire continent away. Judy's careful revelations about the most basic concepts formed a cornerstone for us. A borrowed process to help us take our first steps when all I really wanted to do was freeze in place.

About a year ago I was in San Francisco for the first time. On my third afternoon in the city I walked to Zuni Cafe for lunch. I sat by myself at a table in the corner, near the bar, tucked away by the windows. Any local would be able to point out exactly which one. I had a clear view of the street outside, the bar, the entrance and the kitchen. I took a look at the menu and smiled broadly, I recognized the majority of it from the cookbook that I had recommended to so many to read before they dressed to work in my kitchen.

A server saw me smile and returned the gesture. I looked up at her from my menu, back down to the page and up again. I don't know what she thought but I can't help but imagine that I wasn't the first one to show such enthusiasm to order a caesar salad followed by a bowl of polenta with marscapone cheese. And what to drink: "Oh, whatever you think, a glass of wine." Something cool and pale pink arrived.

I returned for dinner. Cocktail. Wine. Anchovies. The obligatory chicken. Shared at the bar with a distant colleague who was suddenly a very good friend. I learned reverent appreciation for tender leaves of celery that evening. Among other things.

I wrote a note on my way out of town and dropped it in the mail, addressed to no one in particular at Zuni Cafe. In far fewer words than this I expressed gratitude; for the book and its introduction, for all the advice at just the right time, and for two beautiful meals in one day.

I stopped next in Seattle... I had taken the long way, through San Francisco, from Boston, for a conference. I told a roomful of chefs, cooks, farmers and food journalists about my Zuni pilgrimage. The majority of them responded by returning that broad smile I offered the knowing server at that little table, over lunch.

Three days later I was home. There was a letter from Judy waiting for me. She thanked me for my note and my gratitude, "at just the right time." Just a few short paragraphs. She expressed her appreciation for recommending her book but she encouraged me to consider chronicling my own process. That maybe there was a book there too. That maybe someday she would hand it off to one of her cooks and encourage them to read. She said she would look for it.

That was November of 2012. I had no idea then, but I learned a short time later, that Judy was diagnosed with cancer two months prior to my visit. I did not see her cooking in the kitchen on that fall afternoon, or evening. But sometime in the next few days she was there. She read my letter, and replied immediately, and graciously.

In Judy's world, people mattered. I know she believed that, even more than is expressed in that first sentence, in that introductory section, to that very important book. As I look forward to another year of development and mentorship in our dynamic environment, I am compelled to visit Judy's advice again. To pay attention the entire way. To not be afraid to experiment. To push boundaries and explore options within the safety of a trusted process. It is people we are talking about now, as much as recipes.

Judy lost her battle with cancer just over one year later. I never did write back. But I did write. A few recipes here and there. A story about a favorite farmer, a favorite memory, mentor or meal. I also began to consider my process. I now have my own 20 pages that I hand a new cook to read. Stapled in the left hand corner. It is a set of rules more than recipes. How to begin. And what to think about while beginning. Someday, maybe, it will be bound together as an introduction with a collection of recipes and memories from my kitchen. Until then, please read Judy's. 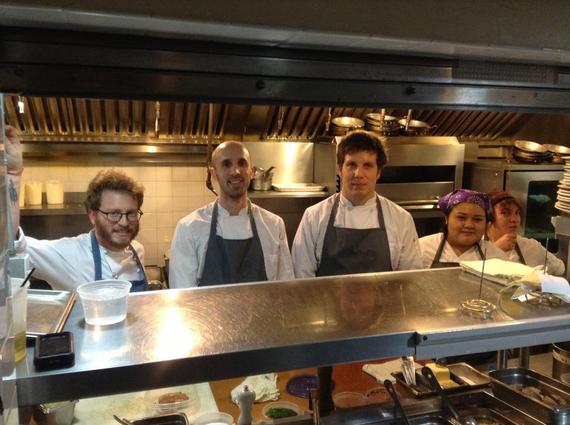