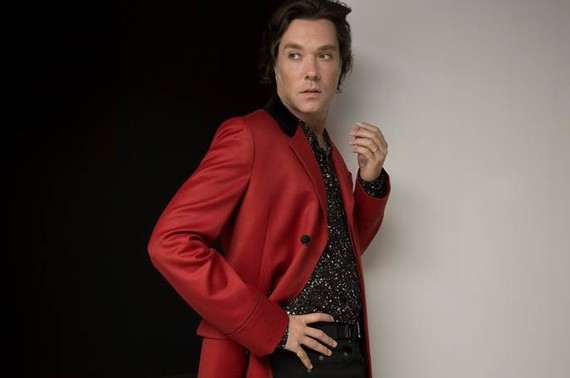 On June 16 and 17, singer, songwriter and composer, Rufus Wainwright will head back to Carnegie Hall to revive his wildly acclaimed tribute to Judy Garland, Rufus Does Judy. Revisit, however, is probably a better description than "revive." Ten years after its first iteration, Wainwright admits his perspective has changed - something to be seen in the performance of this great artist, honoring one of entertainment's greatest icons.

"I think, initially, when I did the show I was pretty frightened, intimidated and terrorized by the concept, but that was sort of why I was drawn to it," Wainwright said in a recent interview. "I have always liked the rush of horror."

First mounted in 2006, Wainwright paid homage to Judy's epic 1961 concert, Judy's at Carnegie Hall, which itself was described as "the greatest night in show business history." He performed her show, in entirety, with a 36-piece orchestra conducted by Stephen Oremus, resulting in a fantastic reception and reviews. Subsequently, Wainwright released a live album, garnering him a GRAMMY® nomination, and re-mounted the show at similarly famed venues including the London Palladium, Paris L'Olympia and the Hollywood Bowl.

"It will be an interesting evening because I think it will be stable on one hand, but also maybe deeper on the other," Wainwright added about the concert that will also include special guests, including sister, singer Martha Wainwright.

"Whether it's my mother's passing or the birth of my daughter or my marriage or the fact that I have an opera or work with Mark Ronson, I have definitely expanded on all fronts of my life and seemed to have improved due to that except, of course, the death of my mom [celebrated folk singer-songwriter, Kate McGarrigle]," he said. "I feel like these songs, the material, and the music and the arrangements are built to really span interests depending on where you are in your world, both mentally and musically, and to kind of reflect the reality of what's going on inside."

As one of contemporary music's great innovators, however, Wainwright's show isn't just a parody of the incredible Judy Garland - an oversized piano bar tribute. It's Rufus singing Judy; Wainwright bringing Garland's work and essence back to life through his own unique and celebrated perspective.

"I, of course, adore all the shenanigans that her life offered, whether it was her addiction and her drugged out phone calls and all that stuff," Wainwright said of Garland's personal life which in some respects has diminished her work, and in others, add to her appeal. "I can appreciate that. That being said, first and foremost, it has to be stated that she was one of the greatest singers who ever lived, and a lot of the greatest songs were written for her," he added. It's a reminder that Garland's acclaim was the result of her otherworldly talent combined with the work of some of history's most renowned musicians, like George and Ira Gershwin, Johnny Mercer, Harold Arlen, and more.

"I think I have written some pretty good tunes, and I hope to write some other ones, but in my estimation a lot of [Judy's] numbers -not all of them, but a handful - are absolute masterpieces of American songwriting."

"She was the most accomplished and successful star in the world for certain periods of time... That's why I think it's valid to resurrect her time and time again. All the other stuff, kind of the funny campy stuff, I don't want to discard it because that to me is just a plus," Wainwright added. "When you dig past that [though], you have hit the nugget of brilliance that was her ability and her artistry. That's what I am essentially celebrating."

In addition to the show at Carnegie Hall, he'll also perform Rufus Does Judy in Toronto on June 23 and 24 as part of the Luminato Festival at a theater built inside the decommissioned power plant, the Hearn Generating Station.

"To perform, it is an exercise in the genius and the study of genius," Wainwright said, offering insight into another purpose for honoring a legendary artist. "I think behind Judy are these great songwriters and these great arrangers. It is so many levels to investigate and to try to garner something from. Me as a songwriter and as a singer and as an arranger... there just a lot I can learn from the whole experience."

"I am just ravenous I guess for new concepts and ideas," Wainwright added, extending this insight, and giving a hint to what's led to his own contributions to contemporary music. "I've never regarded music as this kind of monolithic structure. It's something vast and timeless and without borders. That's how I immerse myself it in completely," he said. "I'm totally instinctual. That wipes away time and space."

"It's being able to really listen to what is being said in your subconscious," Wainwright remarked. "I recently released this album, [Take All My Loves: 9 Shakespeare Sonnets], and I knew right away, in terms of putting music to those poems, that I was the lesser mind in the equation," he said. "I kind of have to follow Shakespeare's lead."

About his inspiration for this album, Wainwright said, "It was a great exercise in just turning off your consciousness and really trying to hear what is actually in the air with what's being said in this kind of fourth dimension of existence... I think it's not thinking about it too much and not planning it out and just being able to be receptive."

Wainwright's range of work, in addition to his eight studio albums, includes an opera, Prima Donna, which premiered at Manchester International Festival in July 2009. His next opera, about Roman Emperor Hadrian, will premiere in Toronto in the Fall of 2018.

"I just believe, unequivocally, that these projects I do are projects that must occur, not because I want to do them necessarily, but because they are egging me on. It's a spooky thing."

Steve Schonberg is the editor-in-chief of www.centerontheaisle.com and is seen regularly on NBC's "Weekend Today in New York."