Have you ever wanted to chew on a Starburst forever? Well, now you can. Sort of.

Juicy Fruit -- that gum you may remember as the one with the burst of addictive fruity flavor that disappears in 10 seconds or less, forcing you to take out another stick -- has just introduced Starburst-flavored gum. The sugar-free gum comes in Cherry and Strawberry and it tastes EXACTLY like Starbursts.

Everyone has his or her own favorite Starburst flavor, and to us it feels like you're either in the pink and red camp or the orange and yellow camp. For all you pink and red Starburst-lovers out there, this new gum is for you. 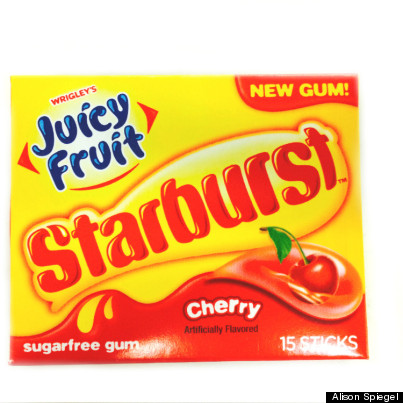 Just like eating a cherry Starburst, except you don't swallow. 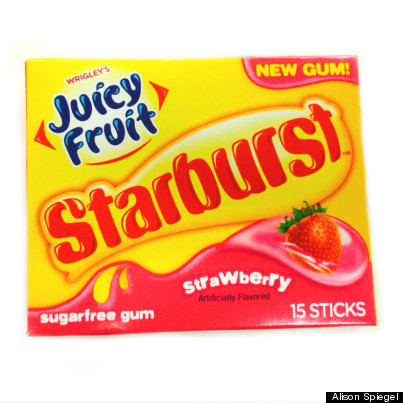 Despite it being flat and thin, it IS a strawberry Starburst. Just. Don't. Swallow. It.

Like traditional Juicy Fruit, the flavor in the Starburst gum doesn't last too long, but it certainly lasts longer than it would take you to eat a red or pink Starburst. Did we mention the flavor profiles are dead on? It's uncanny, which makes it kind of cool and also kind of weird.

We wish the product had been reversed to Juicy Fruit-flavored Starbursts, but that might be even weirder.

If you get your hands on some of the new gum, let us know what you think. Juicy Fruit with Starburst flavors are available now at retailers nationwide. A single pack will cost you $1.19, and a multipack, which contains three 15-count packs of gum, costs $2.69. Prepare to be confused and delighted.

America's Sweet Tooth Happened (Almost) Overnight
Getty
Candy might seem like a grocery store staple, but it wasn't always omnipresent. In 1850, the value of manufactured candy was about $3 million. In 1900, that figure leapt to $60 million. In 1948, the equivalent figure was over $1 billion.
Americans Eat More Candy Than Citrus
Getty
In 2009, America's per capita candy consumption was 24 pounds. Compare that to citrus fruit (20 pounds), rice (21 pounds), cheese (30 pounds) and fish/shellfish (16 pounds).
People Used To Eat Cream Cheese & Marshmallow Sandwiches
Getty
The first printed evidence for s'mores is in a 1927 Girl Scouts of America handbook. But America's fascination for marshmallow occurred even before that, with popularized now-vintage recipes that included cream cheese and marshmallow sandwiches, and baked lima beans topped with bacon and marshmallows.
Advertisement
Chicken Dinner Was Actually The Name Of A Candy Bar
CandyProfessor.com
In the early 1900s, the candy industry made a big push to have people eat candy for lunch. In 1903, Hershey's promoted its milk chocolate bar with the slogan "More sustaining than meat." In the following decade, there was a chocolate and peanut butter bar titled "Klein's Lunch Bar." From there, despite having no bread in their ingredients, candy bars often adopted the word "sandwich" within their names, such as the Denver Sandwich or the Waleco Sandwich Bar. Then there was the Chicken Dinner bar, which contained no poultry products but did contain chocolate and nuts.
Candy Manufacturers Couldn't Keep Up With The Army's Demand For Candy
Mars/Louise Mirrer
Candy was considered a necessary ration for American soldiers, thanks to its alleged ability to keep them alert and sated. In fact, the army demanded so much candy during wartime that manufacturers struggled with providing enough to consumers.So how much candy were soldiers eating? Estimations clock in at around 50 pounds per year, per soldier. The army and navy's need for candy got so bad that in 1944, U.S. candy manufacturers were told to set aside 50 percent of production of five-cent candies to government agencies.Learn more here.
Candy Corn Wasn't Always A Part Of Halloween
Getty
In the first part of the 20th century, Halloween was celebrated something like a fall festival -- treats included popcorn, apples, donuts and cider. Candy makers didn't even see Halloween as an opportunity to grow sales. But starting in the 1950s, as Halloween became more associated with the color orange, candy corn became more accepted as part of the holiday.
Advertisement
There Probably Aren't Razor Blades In Your Candy
Getty
Remember when you were a kid and your parents would go through all your candy before you could eat in in case there were pins or razor blades or poison on the candy? It turns out that all of those newspaper reports over the years that mentions kids getting injured from candy are pretty much all made up. It's not to say that it couldn't happen, but reports have been greatly exaggerated.