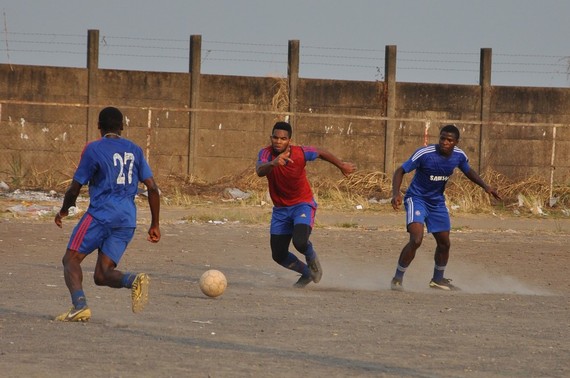 Young footballers dream of places far away and are ready to migrate at all costs. Uroš Kovač, Author provided

The International Olympic Committee (IOC) has expanded the power of World Anti-Doping Agency (WADA), making it a central authority in the "fight against cheating". WADA defines doping as the use of prohibited substances and methods designed to enhance athletic performance.

But are prohibited substances defined only by their chemical makeup? Not according to West African athletes, many of whom take spiritual methods to enhance their performances very seriously.

Football in West Africa is often associated with witchcraft. In Nigeria and Cameroon, these practices are referred to as "jars" or "juju". Athletes use them to enhance their performance in ways that are similar to doping as WADA defines it, and even to sabotage opponents. The key to these practices, however, is not the chemical content of the substances, but the spiritual powers they carry.

According to Cameroonian footballers among whom I conducted my fieldwork, the spiritual world is superimposed on the material world, and actions in the former have direct and far-reaching consequences on the latter.

In West Africa, accusations of spiritual performance-enhancing practices can be much more serious than those involving materials and chemicals.

The concept of "jars" is difficult to pin down, largely because it is shrouded in secrecy and is constantly changing. Information about these practices can be extracted principally from rumours and accusations. Stories allude to small pieces of particular herbs, pieces of tree bark, or small threads that the players acquire from healers who imbue them with supernatural powers.

Aware of the fact that Cameroonian referees would sanction them if they were caught, the footballers hide them under their shin guards, in their boots, or in the rubber band sockets of their shorts. Others are concoctions of herbs prepared by healers that footballers drink, or wash their face, hands or feet in.

These objects and herbs are performance enhancers and allow the players to accomplish miraculous feats on the field. When some FIFA officials have expressed concerns about these supposed African forms of doping, they have been suspicious of their chemical content, but neglected their more important spiritual properties.

One could simply discount "jars" as a psychological delusion or as superstition. But the fact that athletes regularly scrutinise and accuse other players of using it indicates that it means much more. When Cameroonian footballers demonstrate extraordinary skills on the field, their opponents and even teammates closely scrutinise them for any evidence of "jars".

One player told me that, during a match, his opponents forced him to strip down to his underpants in the middle of the field, insisting that he was hiding a spiritual token. Users have also been detected because of the distinct smell of the potions they wash in.

Just as with doping, most footballers in Cameroon are very critical of the use of "jars", arguing that athletes should do away with it once and for all.

Another form of "cheating", a public secret in the world of international football, is players lying about their age. Athletes from different parts of the world produce documents to their future clubs that state they are no older than 19 years of age.

In Cameroon, preparation for trials in European football clubs often involves finding ways to obtain documents that show the player to be younger than he actually is.

While the football clubs and sporting bodies seek to catch and sanction the players, West African footballers do not consider the practice as cheating.

Athletes tamper with their age as a way of equalising the playing field. They attempt to compensate for the fact that aspiring athletes in the Global North, who from a young age have better access to good sports infrastructure and equipment, are in a privileged position to transform their athletic talent into a long-term career.

While international sporting bodies talk about athletes needing to take individual responsibility for different forms of "cheating", young African footballers address large-scale power relations that they see as being turned against them.

By adjusting their age, the footballers challenge the moral high ground on which international sports institutions claim to stand, and demonstrate how "cheating" is not always cheating, but instead a challenge to unequal power relations.

What is 'cheating' and who defines it?

WADA's anti-doping strategies are based on the separation of the body and the mind, the biological and the psychological, the physical and the spiritual. It consistently prioritises the physical, assuming that being a "clean" athlete means being free from prohibited chemicals.

While the kind of regulation that WADA seeks to apply on a global level is useful, it is at odds with the ideas of West African athletes, for whom the spiritual and the physical are deeply entangled.

Is "jars" a form of doping that WADA should attempt to regulate then? Should international sporting bodies clamp down on footballers' age tampering? Absolutely not.

The importance of spirituality in sport is not exclusive to Africa. The Thai owner of Leicester City famously flew buddhist monks in from Thailand to bless the players during the team's miraculous 2015-2016 season.

The African game gives us a different insight into what "performance-enhancing" and "cheating" really mean. The shift in perspective allows us to avoid taking WADA's and the IOC's definitions for granted and stop regarding them as a universal truth.

Instead, we should see them for what they are - hegemonic notions constructed in a certain historical period, developed from a specific philosophical standpoint, and applied from a position of power.

This piece was written in collaboration with the GLOBALSPORT team, a research project funded by the European Research Council.