I don't give heights or tight spaces or snakes a second thought, but the faintest possibility of ever needing to speak to more than a dozen or so people at a time has sent me scurrying for thirty-something years. And plotting hypothetical excuses. And trading favors. And looking for restrooms, my heart all the while attempting to beat a bloody retreat through the top of my head so it will not need to witness a repetition of the last time I publicly elocuted, when there were two hundred students in attendance, and parents, and teachers, and judges and Hemingway's The Short Happy Life of Francis Macomber came sputtering and gurgling out of me:

"All of him, pain, sickness, hatred and all of his remaining strength, was tightening into an absolute concentration for a rush," wrote Hemingway about a lion, though you probably would not have known it from listening to this twelve-year-old's rendition. "He could hear the men talking and he waited, gathering all of himself into this preparation for a charge as soon as the men would come into the grass...."

Nobody would even talk to me for a couple of days after -- what could you say? It was like a public strangulation. Sorry, folks! Also back then I was terrified of ever growing a mustache, but that's another story.

Still, it seems to me now the sort of private, constant terrors that lurk just beneath the surface of ourselves are a great deal more compelling -- in books, in films, or walking around the corner -- than always merely wondering when we're going to be taken by surprise. It's what we sort of know that's really scary: the gaping, haunting silence before somebody shouts boo, but also the silence that comes when we are about to shout boo at someone else. Jules Feiffer's and Florence Parry Heide's Some Things Are Scary is full of the kind of indelible moments that make for great storytelling afterwards, and yet to be living inside them is to wonder if the future of the universe does not hang in the balance every time. Really, what sort of alternative physics allows for a swing to reach the top of its arc and not catapult you over the top? Or permit you to go skating downhill with no brakes, yet somehow not shatter into a million pieces? And what sort of parallel reality would you suddenly be occupying if you held on to someone's hand that wasn't your mother's when you thought it was?

There's a lot of petrifying stuff like that here -- most of it familiar from its outlines, but some you probably haven't considered for many years. "Looking in the mirror while you're having a haircut and they're cutting it too short," may be something you've experienced lately, though for me this was never strictly a matter of the barber's incompetence, but the tyranny of grownups in general who did not need to walk into school the next morning with somebody's else's head. Gosh, my face still gets hot just thinking of it: Stop! Stop cutting! Now it's already too late...

"Seeing a big warning sign and you can't understand what it's saying..."

"Knowing you're going to grow up to be a grownup..."

Scary. Still scary. Whether you are the great Jules Feiffer and it is a little boy's head you are imagining perched on top of ridiculously broad shoulders, or mushrooming out of a suit, or sporting a mustache -- who in the world is going to want to tuck that monster in? 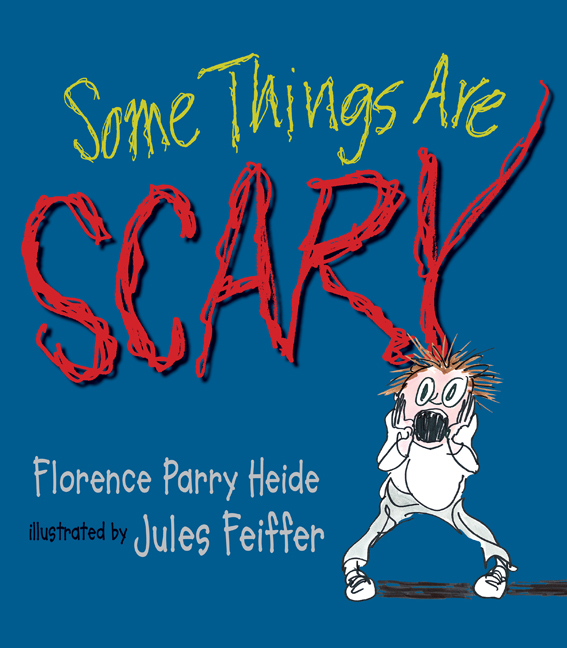 Founder of the online children's bookstore at onepotato.net