Julia Louis-Dreyfus may be in her 50s, but she's happier and healthier than ever.

The "Veep" star covers the July/August issue of Health magazine and admits that although she has curves (like many women do!) she embraces her body and just goes with the flow of aging.

And with age comes changes, although Louis-Dreyfus doesn't seem to mind. The 52-year-old actress, who calls herself "curvy," has a motto when it comes to cellulite: "I try to push the worry down and pull the Spanx up!"

As for plastic surgery, Louis-Dreyfus admits her husband of 26 years Brad Hall "doesn't want me to do that at all," although she considers it sometimes.

"I like that he likes me as I am -- that's important to me," she says of Hall, joking while motioning to her neck, "maybe one day I'm going to get a face-lift! I gotta fix this! But I'm terrified of surgery."

"A weird thing, though, is that watching yourself age on camera is amazing. Well, it's not amazing, but it is a bizarre thing to witness in public," she adds. "All of a sudden, when I turn my head, it's like, What the hell is that doing there? That definitely wasn't there before! It's called a neck that goes bad. That Nora Ephron book [I Feel Bad About My Neck] is true. But that's why God invented scarves." 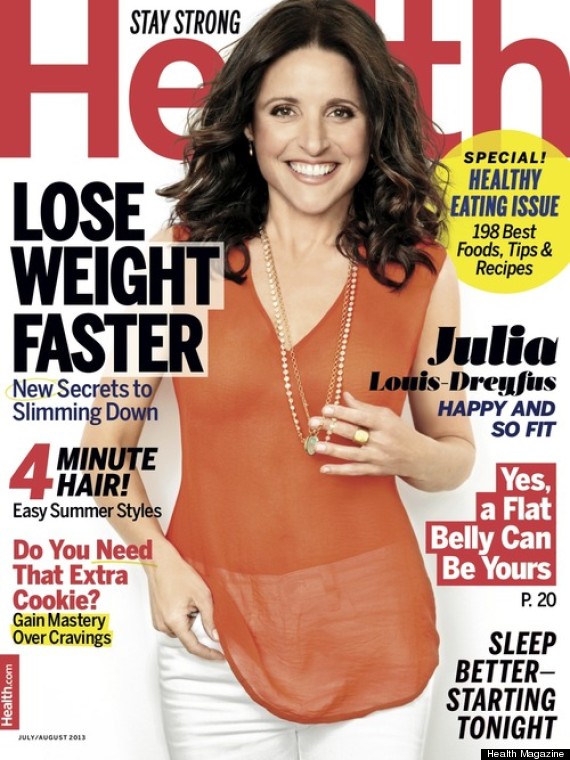