A Peruvian woman allegedly cut off her sleeping boyfriend's penis, then tossed it into the toilet.

Julia Muñoz Huaman, 41, reportedly used a kitchen knife to cut off the penis of 46-year-old Ramon Arias Apaico before flushing the severed appendage, according to the Digital Journal. The two were staying at a hostel in Brena, Peru at the time.

Huaman attempted to leave the hostel, but was stopped by staff members, who contacted authorities after allegedly hearing Apaico's cries of pain, La FM reports. 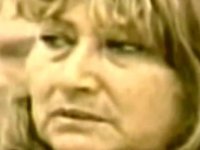 Police claim Muñoz (pictured at right) confessed to the crime, saying she made the slice after learning Apaico had cheated on her, according to MSN.

Apaico was transported to a hospital in Lima, according to Peru 21. Arias remains partially intact, urologist Zarela Solis told the station, and is expected to remain in the hospital 10 days.

He will likely need psychological treatment for several months.