The first debate of Mexico's 2012 presidential election took place this past Sunday night, but unfortunately it seems the candidates had to share the spotlight with Julia Orayen, a former Playboy playmate.

In a white, skin tight dress with a plunging neckline, Orayen appeared as the usher for less than 20 seconds at the very beginning of the debate. Nonetheless, many say she stole the show.

"Unbelievably, to be honest. At the beginning I was quite shocked, I thought it was a trap from the (other) candidates," said Gabriel Quadri, the 2012 Presidential candidate from the "Nueva Alianza" political party, in Spanish to ADNpolitico.com

"Yes, a beautiful usher who to be completely honest deserves my admiration and who left all the male candidates of the debate breathless," he continued in Spanish.

Orayen, the covergirl of Playboy's 2008 September issue, prompted a Twitter frenzy just by gracing the stage for a matter of seconds. Her name trended on Twitter in Mexico City, jumping between third and fourth place throughout the day.

Former Mexican Foreign Minister Jorge Castaneda, who is also a New York University professor, tweeted "The best was the girl in white and the cleavage at the beginning."

However, not everyone was equally as delighted with Orayen's appearance. Some disapproved of the decision to bring the ex-playmate to assist in the debate, arguing that it is part of the hypersexualization of women in Mexican culture.

In response, the Federal Electoral Institute responsible for organizing the debate, issued an apology to the candidates and Mexican citizens, blaming the incident on a production associate hired to help with the debate, according to Mercury News. 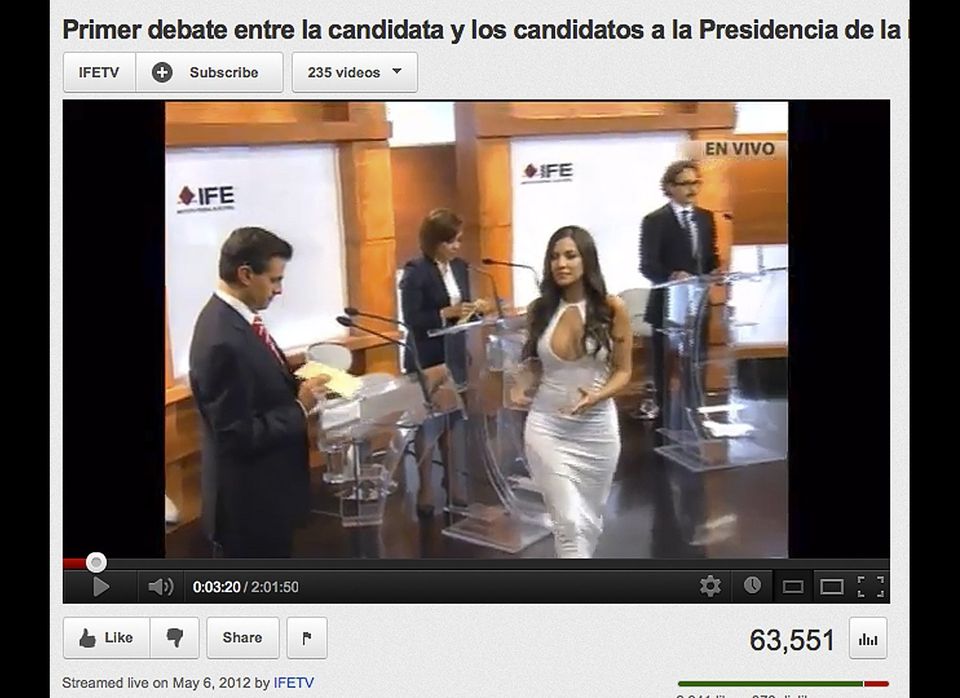 1 / 5
In this screen grab taken from Mexico's Federal Electoral Institute's YouTube channel, Julia Orayen, second from right, carries a box to presidential candidates containing paper for them to take to assign their speaking order at the start of a presidential candidate debate in Mexico City, Sunday, May 6, 2012. The Federal Election Commission, which organized the debate, said an independent producer had hired the former model, and acknowledged that her dress choice was a mistake. (AP Photo/IFETV via YouTube)
AP