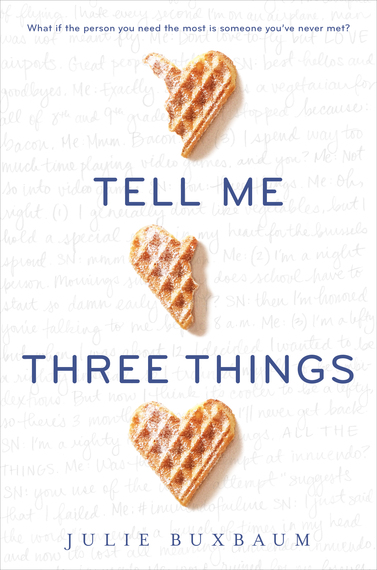 Many of us know what it's like to navigate at a new high school. Fewer of us know how to do it after losing a parent. But what are you supposed to do if you start getting mysterious emails from someone you don't know? In Julie Buxbaum's first young adult novel, Tell Me Three Things, Jessie has to decide whether to meet the person who calls themselves "Somebody/Nobody," or keep the mystery to herself. 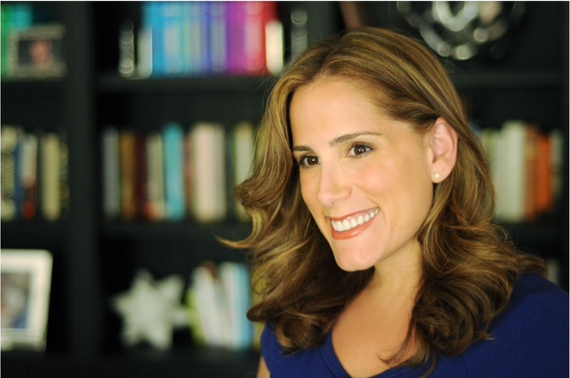 I spoke to Julie about teenagers, adulting, and law school:

Why did you make the transition between writing adult books and young adult books?
I wrote my third adult book and it just didn't work. I spent two years on it, it was blood sweat and tears, and it ended up living in a drawer. It was incredibly painful. I trying to think about what my next project was, and I sort of had this image of a sixteen year old girl.

At the time I didn't really understand, it was sort of like I just wrote the story I wanted to write next, but now in retrospect I do. I think a huge part of it was I had just moved to California, I had bought a house, I had given birth to my second kid, and I was suddenly as adult as I had ever been. I had a mortgage, a husband, two kids, I mean - adulting hard.

I missed the time when I was a teenager and when I didn't know what the future held and none of those questions had been answered yet. I thought it would be really fun where all of those questions are both exciting and terrifying.

How much research did you do in order to craft an authentic teen voice?
It's terrifying to write about teenagers. Every time I would use a word that I don't use in my normal language I would get a little bit nervous. I do spend a crazy amount of time in coffee shops, so I do eavesdrop a lot, hopefully in a non-creepy fashion?

Occasionally, I will turn to a teenage girl sitting next to me and say "Hey, would you say something like this?"

I read that you lost your mother when you were younger. Did that directly tie into Jessie's character?
Absolutely. I know there are probably a lot of "dead mom YA" books out there, but I felt like, despite that, I had a very bigger story to tell. I did lose my mom at fourteen, and it shaped my entire future. It still shapes me, actually. I think I was finally ready to delve into that loss and what it felt like in the immediate aftermath.

What was much scarier for me was to delve into what it felt like then, when it was so raw and so new. I think that writers are usually asking themselves a question when they're writing a book or there's some deeply personal issue they want to explore. I think I was finally sort of ready to open the lid on sixteen-year-old Julie.

Was getting married and moving to California Jessie's dad's way of dealing with his wife's death?
I spent a lot of time thinking about him and trying to make sure he felt real. I think a huge part of it is he's a really broken man. He was completely and totally lost after he lost his wife, and this seems like his way out. I find desperate people do desperate things sometimes without thinking through, and I think he thought it would be a better life for both of them.

Right? But I read that you went to law school. Is that true?
Yes, it is true. I went to Harvard Law School straight out of college. I loved law school. I really, really, really enjoyed the study of law. The practice - not so much. I found it incredibly boring. I practiced law for about four years and then, as part of a New Year's Resolution I quit to write my first book. I wasn't married and I didn't have children, so there was no financial reason not to take the risk. I figured that, if I fell flat on my face, I could always go back to being a lawyer.

What do you hope teens will take away from this book?
One of the reasons I write in the first person is I love the opportunity to be in someone else's head. I hope the book gives people the opportunity to see that everyone else has something going on in their head and we don't really know each other.

Jessie starts at a new school where no one knows her, and immediately, upon seeing her face, start to assume certain things about her. Nobody has any idea what she's been through, and I think it's important for people to jump into other people's heads. I hope I make that feeling of losing a parent real for a reader, to just get a chance of what other people go through, if they haven't gone through it themselves. I think the feeling of loss is universal, and I hope people relate to that.

I really hope people relate to that feeling of first love. I think there's nothing more magical than that love, fresh, non-cynical love where it's just about the moment and not about the future. I happen to love those moments when I'm reading, so I hope that I provide that.

I want it to feel authentic and real.