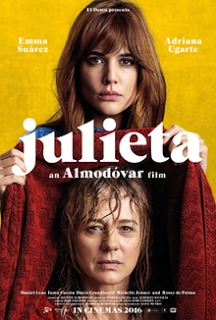 There is a scene in Pedro Almodovar's Julieta (based on three short stories by Alice Munro) in which a towel is pulled off the head of the youthful version of the character (Adriana Ugarte) to reveal the mature self played by the actress Emma Suarez. What's so moving about the scene in question is that it epitomizes the theme of loss that pervades the action. Julietta loses her youth, but she also loses her innocence more than once when a man she fobs off throws himself under a train, when she loses her husband Xoan (Daniel Grao) to an accident at sea, her daughter Antia (Patricia Delgado and Blanca Pares) to a cult and her mother, Sara (Susi Sanchez) to illness. Almodovar's latest outing is, in fact, a fugue about loss. Julietta also loses her friend, the sculptress Ava (Inma Cuesta) to MS while her father loses Julietta when he runs off with his housekeeper. Julieta's estranged daughter loses her 9 year old son, Xoan. Alice Munro is well known for her brilliant polyphonic narratives and narrative itself is the subject of the film whose humanity derives from the notion that everything that goes around comes around. Julieta is furnished in what might be called Spanish Modern. A Lucien Freud hangs on a wall, a book about the composer Ryuichi Sakamoto lies on a table while Julieta walks around in a robe printed in a Gustav Klimt pattern and at times the movie seems to succumb to the weight of all the narrative and symbolism it's carrying. Esthetic posturing undermines profundity; the exuberant flourishes and grand brush strokes overwhelm substance. It's cinematic over emotional reality. While you may admire the complexity, ambition and brilliance, it's unclear if the irresolution at the end is a reflection of human life or a surfeit of information that's hard to digest.