Juliette Binoche, in a fluorescent pink dress and a short boyish haircut, stepped out of a limousine looking so nonchalant that it almost did not seem like it was she who was going to walk up the Red Carpet, at the Palais of the Marrakech International Film Festival, to a ceremony in her honor, before a thousand fans. 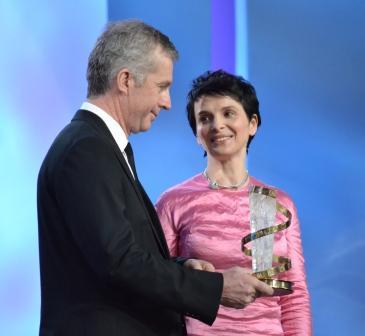 Presenting the Lifetime Achievement Award to her was French director Bruno Dumont, who recently directed Binoche in his movie based on the life of sculptor Camille Claudel, after her love affair with Auguste Rodin has ended and she, mad with paranoia, has been committed to an asylum, where she would remain for 30 years, until her death and burial in a common grave.

Camille Claudel 1915 is a testimony to Binoche's enormous talent, much as was the film that put Binoche in the international spotlight: Kieslowski's Blue, a similarly emotionally raw story about a woman going through extreme bereavement, following the death of her husband and child. Camille makes us experience the inner world of the artist as she paces before walls or seems frightened of her fellow inmates, who are far more insane than she, breaking out in shrieks of laughter with gaping toothless mouths. We hear her footsteps incessantly in the stones of the courtyard; peer into her anguished eyes; participate in her joy when she expects to be freed by her brother Paul.

Binoche--in a film where nothing happens--is riveting at every instant. The last shot on her trembling face brings tears.

"Each role demands the right actor," Dumont told me the next morning in the gardens of the Mamounia Hotel. "To play an artist, one must be an artist. Binoche is an artist."

It was Binoche who approached him for a role in a film, and Dumont immediately thought of Camille, a woman who already fascinated him. "I chose this character for Juliette because this is what I do: choose the role for the actor, not vice versa. If I want to paint the portrait of a peasant, then I take a peasant. So for this movie about an artist, I took an artist. Binoche like Claudel is a bit paranoid. Every artist is a bit paranoid, due to their fame. Juliette is very exposed; Claudel too was a star at her time, and probably under a lot of pressure."

Dumont continued with enthusiasm: "The character of Camille is someone who goes from one extreme state to another: she is very much in ecstasy and then very much in distress. I like these extremes, these huge contrasts between different states of mind. The spectator is very touched by it. Cinema is all about going back from shadow to light and back and forth: cinema is a place of transgression. Juliette Binoche is extreme in her art. The extreme is a very expressive moment. Like madness, it is the limit of our equilibrium, the place that makes us afraid."

Is it easy to direct Juliette?

"No," Dumont chuckled, with affection for his star. "The first thing Juliette did every morning was to put herself in a depressive mood. She cried each day to put herself in the right mood. When you have actors like that, you have to direct them. You have to put limits, give direction, or they go too far, because they don't see themselves in the camera as I do. I would just look and say no. An actor is an instrument. One needs to control them."

I asked Juliette Binoche, in a later interview in the same garden, for her own comments.

"No," Binoche smiled. "The limits impose themselves on me. Sometimes Dumont would see me crying and just say: stop!"

Up close, watching Juliette Binoche's expressive face, one sees why Dumont would refer to an actor as an "instrument." The skin of her face seems alive, moving, with faint nearly invisible crow-wrinkles by her eyes, her hazel eyes registering different emotions at every instant. Above all, she gives the impression of being very "present", her nerves on alert, and responsive to all around her. Wearing an oversized black sweater, no make-up, and sipping from a cup of tea, Binoche leaned close with careful attention to each journalist who posed a question before her. She is an acute listener.

"The face of a child!" commented one journalist, joyously. "You only meet a woman like this once or twice in a lifetime. What a generous heart---the way she acts so warmly with us."

"Not a diva at all," commented another enraptured journalist. 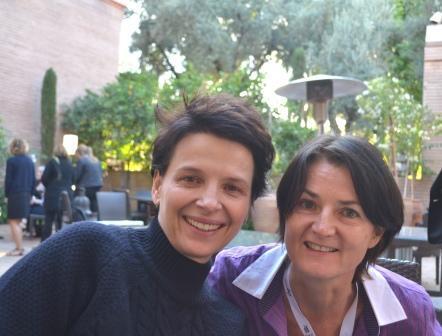 "She is grace personified," is the way Dumont introduced her at the ceremony. Later, when I put my arm around her for a photo, I was surprised by how gentle she felt, in her black sweater, reminiscent of a tender child.

How was it for Binoche to play Camille?

"It's not easy to play her; it's not easy to play a role without a script. The first half of the shooting I was haunted by her. I would wake up in the middle of the night, frightened; I felt my body was strange. In the middle, it changed. I was so happy. It was like light. No heaviness. Almost a turn inside."

How did she prepare for the part?

"I had to choose something that relates to me. My favorite part was the preparation. You can really go into the role, try things. Search inside yourself. I had to see where I too am abandoned, to stay in a place where I was not very comfortable, to stay in a place where I am naked and vulnerable. That is the cost of acting; you must have the willingness to expose yourself. I felt so light at the end of Camille Claudel: liberated."

I dared to ask Binoche what she felt her talent consisted in. How is she so able to enter these extreme emotional states, so expressively?

"Ah," said Binoche. "I have reflected on that, and I now think I know what it is. It's a matter of belief. Compassion. Being in the moment. I see my daughter has that same capacity."

"When my daughter was six, she had a box where she pretended there was a snake," Binoche laughed and imitated, with her hands, a snake jumping out of a box. "No matter how often my daughter opened the box, she would be frightened and say 'Ah!!!' For her the snake was there! That is what being in the moment means."

And how does Binoche evaluate her own acting, when she watches her films?

"When I look at a movie, the only criterion is is it true or not. Some films I watch and see mistakes I have made. Others I do not. Like Blue," she stared seriously at her upraised hand. "That film was exact."