Juliette Lewis' romance with Brad Pitt reminds her of a simpler time in Hollywood, she told HuffPost Live on Friday.

During a conversation about her new film "Kelly And Cal," which is in theaters and available on iTunes now, host Ricky Camilleri asked about her relationship with Pitt, which lasted for four years. Lewis seemed to enjoy talking a walk down memory lane as she looked at snapshots of herself and Pitt as "'90s kids," and one photo in particular made her think of the time before fashion was such a big part of Hollywood and people wore "ruffled prom dresses" to the Oscars. 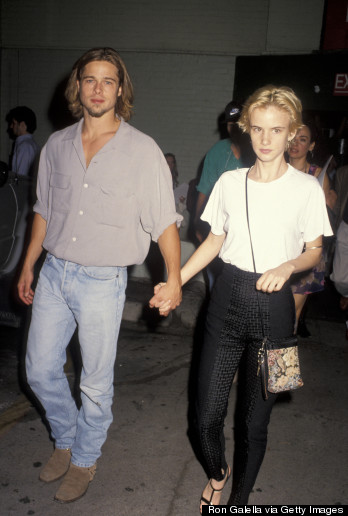 Brad Pitt and Juliette Lewis appear in a photograph taken during their 1990s romance.

"This is what I love about all these photos," Lewis said about the picture above. "I was wearing his shirt and some just random pants from my closet. What I love about that is there's no styling."

Lewis briefly remarked on Pitt's recent wedding to Angelina Jolie -- "How awesome is that?" -- but didn't have much else to say about Pitt's life today.

"Whenever I get asked Brad questions, I'm like, 'Do you want to talk about ... my seventh-grade crush?' Because that was my boyfriend too," Lewis said.

The actress has previously explained her confusion about the fascination surrounding her relationship with Pitt. She told The Daily Mail in 2010:

It amazes me that people are still fascinated that we went out for four years. I was a teenager at the time. It's a lifetime away. I was in my high-school years and it was a wonderful, loving relationship with a fun, smart guy. Then it was over and he went on to become incredibly famous. The far more significant relationship was my marriage to an incredible pro skateboarder (Steve Berra). But no one wants to know about that. All these years on, there's nothing I can say or divulge about Brad Pitt that would be remotely interesting to any intelligent being.

Lewis also spent some time during the interview talking about another '90s relic, "Natural Born Killers," the film she made with Oliver Stone in 1994 that she said brought out her "masochistic" side.

See Lewis discuss her relationship with Brad Pitt in the clip above, and click here for the full HuffPost Live conversation.