Archeologists from the Spanish National Research Council believe they have found the precise spot where Julius Caesar was stabbed in Rome--and what they think happened is pretty dramatic.

The scientists said in a written statement that they found a concrete structure, about three meters wide, inside the Pompey's Theater in Rome's historic Torre Argentina square.

The researchers identified the structure as a monument placed in the location of Caesar's murder by order of his adopted son Augustus--a sort of "x marks the spot" discovery.

Based on their research and historic texts, the scientists suggest Caesar was stabbed while sitting in a chair as he oversaw a meeting of the Senate at the bottom of the Curia of Pompey.

"We always knew that Julius Caesar was assassinated in the Curia of Pompey on March 15, 44 B.C., because the classical texts pass on so, but so far no material evidence of this fact... had been recovered," Dr. Antonio Monterroso, a Spanish council researcher who works at the Institute of History, said in the statement. 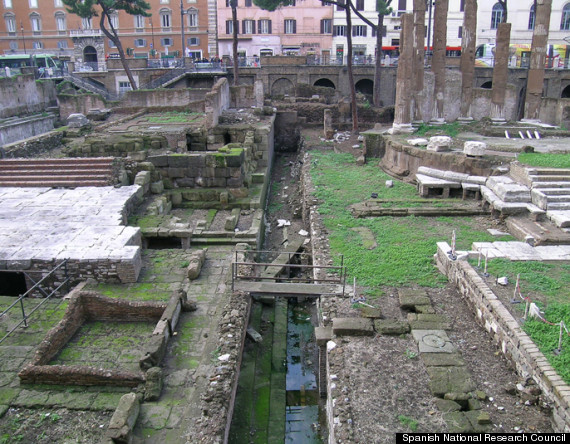 The monumental complex in Rome where researchers suggest Julius Caesar was stabbed.

Monterroso added that the finding is an astonishing part of modern-day life.

"Thousands of people today take the bus and tram right next to where, 2,056 years ago, Julius Caesar was stabbed," he said in the statement.

This new research notes where Caesar was stabbed, but not necessarily where he died.