Caity Gwin did everything a budding professional dancer is supposed to do. She studied ballet five days a week, all the way through high school. She would travel from Connecticut, where she grew up, to New York City to see recitals. And when her dance teacher, impressed with her talent, asked if she was planning to dance for a living, Gwin didn't bat an eyelash.

"It hadn't occurred to me that I would do anything else," she said. "I wanted to do it as long as I could, and if I would get paid for it, that would be even better."

Gwin was accepted into one of the most competitive programs in the country, the four-year dance curriculum at the Juilliard School in New York, and everything seemed on track. All her work would pay off and she would join a top company upon graduation.

But something at Juilliard didn't feel right.

"Three semesters in, I just really felt like I wasn't getting what I wanted from a college experience," she said. "I was being trained to be a very specific type of dancer, but not an artist. I felt like I was becoming a technician and that wasn't what I wanted. And I felt steadily more depressed and anxious; I thought I wasn't honoring myself as a body or as a woman."

Dancing was something that had always made Gwin feel powerful and free at the same time. But at Julliard, where her body, her schedule and her training were scrutinized, she no longer felt that way, she said. So she transferred to the dance program at famously liberal Sarah Lawrence College, where she studied theory, history and choreography, ladanotation, politics and other forms of art. When she graduated, she considered going the classical route, like she had always imagined doing.

"I auditioned, I took classes, I had a few successful auditions and worked with a few different people, but I just kept coming back to this same sort of feeling that I wasn't interested, and wasn't getting paid very much, if anything," she said. Her new relationship with ballet felt like her first "great heartbreak," where the reality of the business shattered the dream she'd had growing up.

And that's where Gwin took a professional turn that affected those closest to her, including her parents -- a retired engineer and a nurse -- and her long-time girlfriend. She began to take her clothes off and dance for a living.

It certainly wasn't something she was "forced into," she said. Her affinity for stripping came early, when she was still at Juilliard. She got started in the burlesque community of New York -- a more "theatrical" form of stripping, dating back hundreds of years -- and then she found a community of like-minded lesbian and bisexual women who were taking things a step further and stripping in New York clubs. They took Gwin under their wing.

"I was dancing, naked, there's this room full of people adoring me. Nothing felt wrong with that," she said.

She would write about her experiences in journals, and through her classes at Sarah Lawrence. She called herself "Vikki Badd."

As a kid, she'd always been comfortable with nudity. She had worked as an art model, and taking her clothes off never felt embarrassing. Stripping, Gwin said, embodied much of what she wanted out of dance performance, whereas ballet suddenly felt forced.

"In the ballet world I felt like I was getting exploited, but it was other people doing the exploiting. I'd have to change my weight when they wanted, they could call me and change my schedule, and at the end of the day someone else gets all the money," she said. But with stripping, she felt a "power" she hadn't felt before.

According to Times critic Charles McGrath, Bentley wrote her book at a time when most sex writing aimed "to demystify and de-emotionalize sex — to reduce it to a physical and hormonal process not much different from, say, scratching an itch," whereas Bentley "sees sex as an avenue to spirituality, to the mystical and sublime."

Bentley has also stripped a couple times herself, to Leonard Cohen music at the Blue Angel Exotic Cabaret in New York. She said there are a "huge number of parallels" between the art of stripping and that of ballet.

"People say that stripping is about sex and ballet is about art. I understand that argument. But what's interesting to me about it are the incredible similarities," she explained. "The body control, having this beautiful body and showing off your body, this is what strippers and ballet dancers do. Having that kind of narcissism is essential for a great performer."

Bentley took issue with Gwin's claim that ballet doesn't offer the same freedom as stripping. She noted that Balanchine's ballets are some of the most beautiful, highly sexualized performances there ever were. "Balanchine blurred this puritan line of 'this is sex and this is high art,'" she said. "Nobody made more statements about women and sex and eroticism than George Balanchine."

Yet she cannot refute Gwin's observations about the power struggle inherent in strip clubs.

"To me, the act of stripping was incredibly empowering! Incredibly," Bentley said. "These really generalized ideas that if a woman gets naked she's giving the power to the men -- who's in power in a strip joint? Guys are sitting around with dicks in their hands -- who's in power? She's making the money. If she's a poor girl on drugs from a terrible, hateful family, that's one thing, but a woman who chooses to strip and shows her body to a roomful of men who want to see it? She's in power."

Though Gwin still wrestles with the implications of her chosen craft, she ultimately feels comfortable with what she's doing for a living.

"For me it feels less about being exploited and more like harvesting this natural resource I have," she explained. "I felt way more creative. I was building a performance, from the beginning to the end. I got to choose my name, a whole backstory. You go through the motions of falling in love with somebody 30 different times throughout the night."

She has stripped all over the city, from the more "classic" strip joints in Times Square to ones far out in Brooklyn, near the Queens border. She said she has only had one bad experience with a "client," and she generally enjoys the strip club environment. The club owners, for the most part, have been supportive, unlike the way they're usually portrayed on television and in the movies.

Gwin did admit, however, that her long-term relationship may have been compromised by her chosen profession, and it took her parents some time to come to terms with it. Though most people in her life have come to support her current career choice, she said they also acknowledge how difficult it might be if someone close to them -- their "daughters or lovers" -- decided to strip professionally.

"But that's why the more people know about it, the more misconceptions they get out of their minds, and the easier it is," Gwin said. "It's just a job. It's taboo, but a lot of it has to do with mainstream media and the women out there who are abusing it."

Over the next year, she plans on moving to a different city each month to work. She's already been to Montreal, where she danced at four different clubs, and Reno, where she said she felt "like a pirate," because it was so easy to make money. Now she's trying her hand at the scene in Chicago. She likes the idea of Europe, and hopes to write about her adventures around the world. Maybe it will turn into "The Great American Novel," she said, half-jokingly.

But Gwin also knows that, like any dancer, she cannot do this professionally forever. She imagines she might teach, or write, or direct a company she creates.

"It will always come back to movement," she says. "But I don't look 10 years ahead anymore. I did that already." 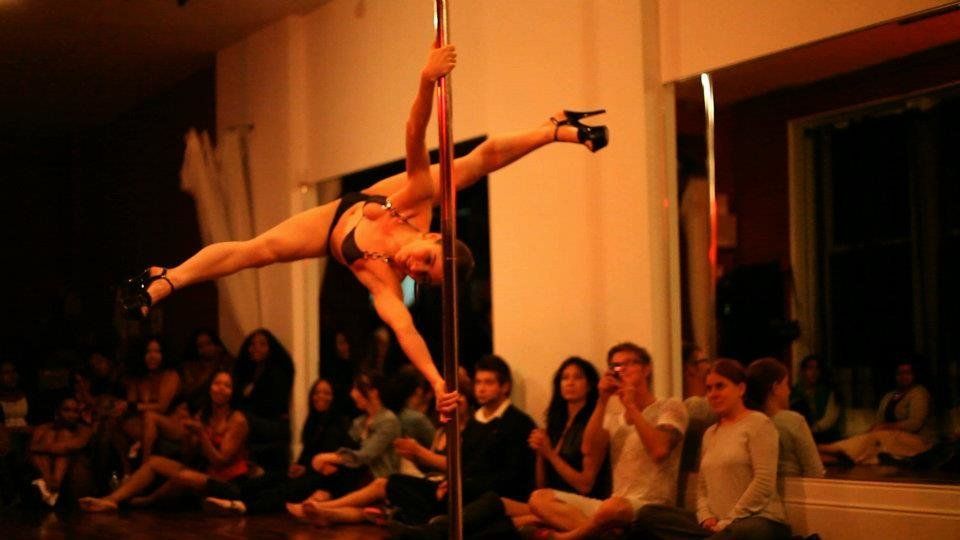