Even in a summer already filled with stretches of very hot weather, this week will be stubbornly brutal, with no relief in sight until the weekend brings thunderstorms to the region, they said.

"Plain and simple, this week may feel the worst of any week for this summer in the Northeast," said Accuweather.com meteorologist Alex Sosnowski.

The thunderstorms predicted for Friday and Saturday are likely to be severe, forecasters warned.

A heat advisory is issued if the heat index - a measure of how hot it feels when relative humidity is factored in with air temperature - reaches 100 to 104 degrees Fahrenheit (38 to 40 degrees Centigrade), it said.

"It feels like I am in Florida again, the way that the humidity mixes with the heat," said musician Brad Hester, 26, sitting shirtless on his porch in Albany. "We're getting a tropical kind of consistency."

The NWS warned of the dangers of heat-related illnesses, asking area residents to be on the lookout for signs of fatigue, sunstroke, muscle cramps and heat exhaustion.

Through Friday, places such as Baltimore, Washington, Hartford, Connecticut, and Philadelphia can expect temperatures in the high 90s F (mid 30s C).

"A lack of a breeze in the humid conditions at night will make it very rough in urban areas without air conditioning or a fan," Sosnowski said.

In Albany, Walmart worker Jay Sebastiano, 31, recommended "air-conditioner and beer," while Price Chopper employee Ally Cunniff, 24, said: "I stay inside in front of the A.C. and waste my days on the Internet."

Michael McCabe, 21, who raises chickens in Port Ewen, New York, said he beats the heat by controlling his thoughts.

"I think 'cool' thoughts, control my heart rate and regulate my body temperature," he said.

Not everyone was hot and bothered. Zohar Kline, 36, a native of Israel, was taking a smoking break outside a shop where she works in the Roslyn Valley community outside Philadelphia. 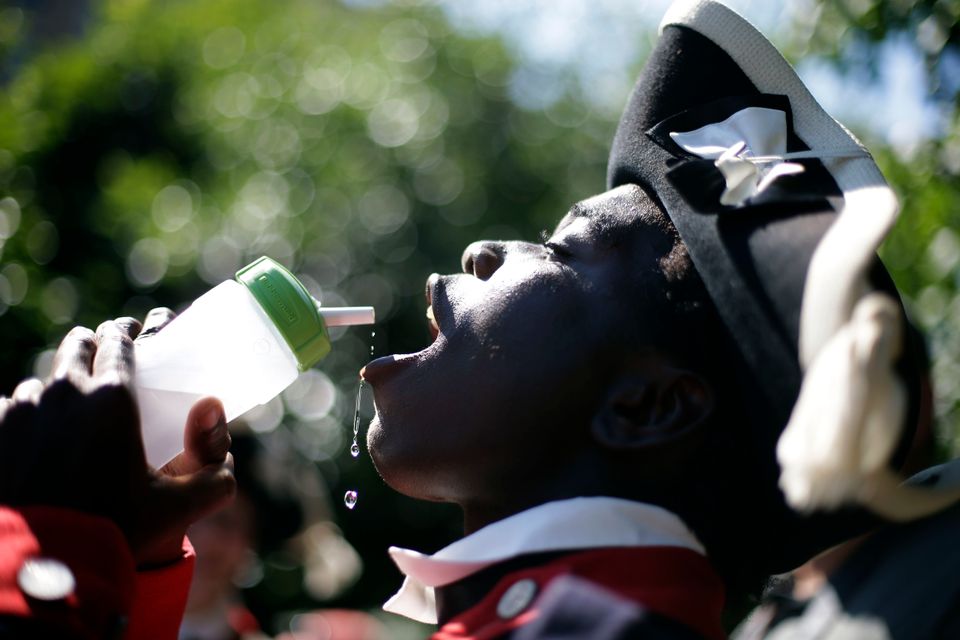 1 / 9
Dressed in a wool uniform Binyah Howard, 14, with the Plymouth Fife and Drum Corps takes a drink near Independence Hall, Tuesday, July 16, 2013, in Philadelphia. An excessive heat warning is in effect in Philadelphia and surrounding counties as temperatures are expected to reach into the 90s. (AP Photo/Matt Rourke)
AP