July 4. Yup. It's all about sparklers, fireworks and family picnics. And, of course, Independence.

On July 4, 1776, a collective of 13 young United States colonies declared a plea for life, liberty and the pursuit of happiness. It was the date an undaunted kid nicknamed America broke away from Mother England's apron strings.

July 4, 1862, almost 100 years later, commemmorates another feisty child in search of freedom -- this one named Alice. Yes, that very same Alice of Wonderland and Looking Glass fame. It all started on Sunday afternoon, July 4 1862, when young Alice Liddell set off on a boat outing down the Thames with sisters Edith and Lorina, family friends Lewis (pen name) Carroll and Reverend Robinson Duckworth planning teatime on the river bank. 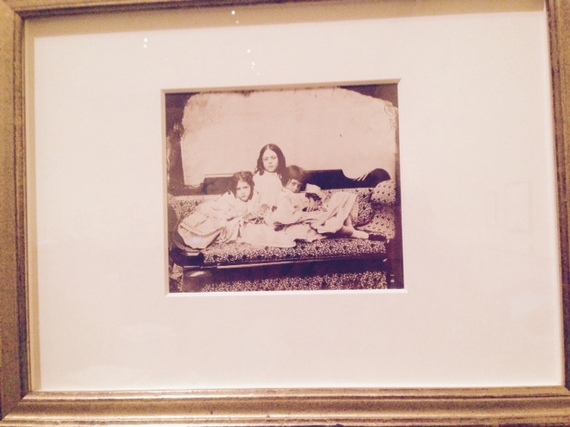 During the ride, ten-year old Alice requested a story (which Carroll improvised as they rowed), later begging for a written copy, which he gave her as a Christmas present two and a half years later. Result? Alice in Wonderland, one of the most cherished books in the history of literature.

Both July 4ths, almost a century apart, shared the gift of words: in 1776 the historic Jefferson/Adams/Franklin Declaration words were sealed on parchment; in 1862 Lewis Carroll's landmark words were spoken aloud; finally on July 4, 1865, his words were sealed in the first edition of literary classic Alice in Wonderland. The common goals? Freedom, courage, and an undaunted spirit to shake off (apologies to Taylor Swift) the reins of authority.

Both dates in history ring freedom as clearly as The Liberty Bell and Alice's freefall; one the origin of the Declaration of Independence; one the start of Alice's escape, both marked in time as boldly as the White Rabbit's pocket watch. Our forefathers seem to have fallen down the Revolutionary Rabbit Hole, inspiring dear young Alice. After all, both started with Mad Tea parties on boats - one in Oxford, and one in Boston! Both signify the risky path towards the unknown: the uncharted territories of the American colonies; and the fantastical gardens, pools of tears, and croquet grounds awaiting curious Explorer Alice.

Curiously, alas, creativity breeds both beauty and discontent. Lewis (born Charles Dodgson) Carroll seemed a dauntless soul, painstakingly photographing, sketching, and revising his work. Many artists are hopeless romantics. But this duo -- Lewis Carroll and hired illustrator John Tenniel -- seemed more like hopeless perfectionists. According to Morgan Library curator Carolyn Vega (Alice in Wonderland 150th anniversary exhibit), Carroll listed the pages where the illustrations should be placed, down to 1/8". But when the first edition came out, Tenniel objected vehemently to lines that were too thick and annoying show-through of type. Amidst the bickering and the detail, the first printing was recalled. 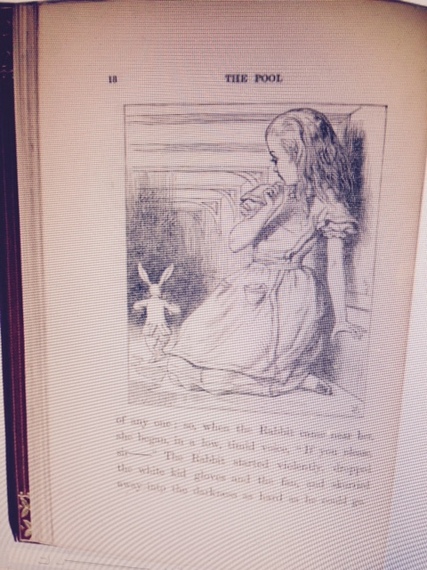 Today, this Carroll-Tenniel dispute might have been a bitter twitter chat. But back then - ah, sacred freedom from the as-yet-unknown social media mayhem. It was all about the written word, a path to another kind of freedom -- through diaries, correspondence, notebooks, journals, pen and paper, and story-telling.

An independent sort, a born pathfinder, Carroll retained his own freedom from the publisher's reins; having funded the book, he controlled design and binding, licensing characters, and merchandising. A risk-taker and entrepreneurial spirit, he opted to re-print, despite the grim calculation that he'd have to sell 4,000 copies to break even. The rejected copies were sent to America. By the time Lewis Carroll died, Alice in Wonderland was in its 9th edition. The classic has been translated into 65 languages including Cornish and Latin. He had that July 4th courage to step forward with determination.

When I was eight years old, my own determined self wanted to be just like Alice: down to her long silky hair. I was already inquisitive and relentless. When I turned nine, my mom created a hairstyle for me and my sister - we called it Alice in Wonderland. 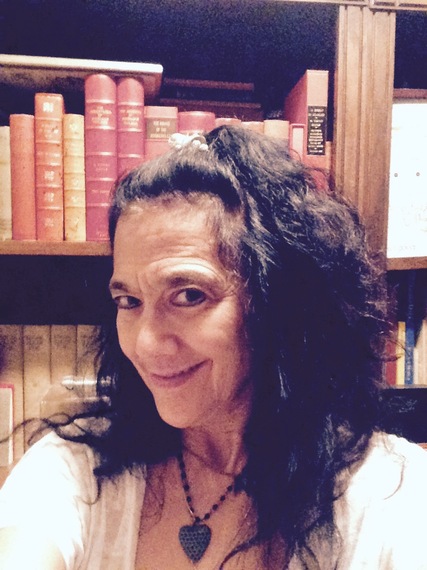 We were trend-setters in the 60's, just like Alice, stamping a new style to contrast the pageboys and flips. I'd had enough of pigtails and ponytails. Enough of listening to endless chatter of principals, school staff, crossing guards, monitors, authority figures. Yes, indeed, we were enchanted by the Caterpillar, transfixed by the Mad Hatter, stunned by the Red Queen, and, of course, entranced by the indomitable Cheshire Cat.

On July 4, 1963, I sat on the stoop of a hot summer's night, just about Alice's age, a 10-year old mesmerized by the fireflies, watching them swoop away from my chubby hands trying to capture the blinking bugs.

The quest for the unknown is an intriguing, upside down world, from politics to revolution. We young girls, just like the young colonists, wanted to be just like Alice: curious and assertive.

In the Land of America, the colonies broke from England. In Wonderland, the Mock Turtle, Gryphon, and Mad Hatter break away from the rules. In junior high, I took a rather risqué road on final exams. It was off the straight and narrow. When my mind froze and I panicked on a question that stumped me, I did the unthinkable; I wrote a rhyming poem. My rebellious spirit paralleled Alice once again. It was a nonsensical but rather ingenious solution to an otherwise black hole of stupor, brain block and probable failed grade.

My role model was none other than Lewis Carroll, master of logic and math, whose characters and words they speak are both nonsensical and illogical. In fact they are downright surreal. While still falling in mid-air, Alice plucks a jar of orange marmalade off a shelf and puts it back in one of the cupboards. Just because a jar is labelled orange marmalade doesn't mean it is a jar full of orange marmalade. All laws of physics and common sense have been null and void. They're simply cancelled out. 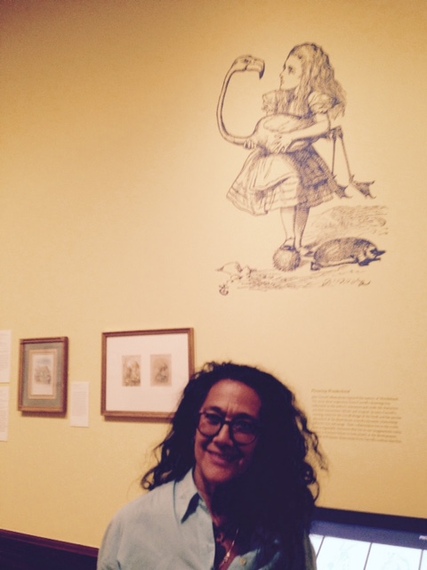 July 4, 1969. I, like Alice, decided to take a stand. After all, Alice snatched the baby away from the Cook who saturated the kitchen with pepper, causing the baby to sneeze. True, the baby transformed into a pig. And I transformed into an activist. I didn't have a helpless baby to save, so I marched with my high school class against Vietnam and war and homelessness.

Lewis Carroll, master of logic, nonsense, and prophesy. While falling down the rabbit hole, Alice wonders if she will "fall right through the earth" and come out on the other side where people "walk with their heads downwards." He must have foreseen the cellphone users of today, walking with heads down, focused on their texting.

Mine was also a family of logicians. My Mom loved algebra and proving theorems; my Dad was a cryptographer and linguist. We all loved logic, word games, puzzles, crosswords, and acrostics.
Alice & Co. drew us into a totally intriguing land of wonder.

Carroll had the independent spirit to dismiss the rigid, to throw the logic he taught at Oxford out the door. After all, the Red Queen declared: "Now here you see it takes all the running you can do, to keep in the same place." And The Duchess added, matter-of-factly: "be what you would seem to be or if you'd like it put more simply - never imagine yourself not to be otherwise than what it might appear to others that what you were or might have been was not otherwise than what you had been would have appeared to them to be otherwise." Makes perfect sense.

And so, I used a totally logical yet non-traditional, freedom from "MUST DO" approach: rhyme. Hey, what better guide could I have had than The Lobster Quadrille?

And so, on my final Physics Exam with Mr. Reine, I scribbled:

"The concave MIRROR curves away just like a crescent moon,
The scooped out portion of a sphere, the inside of a spoon.
It makes an object look quite large, a person look quite wide.
It's used by dentists to see teeth and mouths much magnified.
Convex MIRRORS are reverse; they bulge out like a ball.
They curve out towards the object and create an image small."

The Mock Turtle explained to Alice the courses he had at school in the sea:
'Reeling and Writhing, of course, to begin with,' the Mock Turtle replied; 'and then the different branches of Arithmetic -- Ambition, Distraction, Uglification, and Derision.'
'I never heard of "Uglification," Alice ventured to say. 'What is it?'

So by simple mathematical deduction, I decided to use Rhymification the very next day on my Genetics Exam:

The while I lay in bed I thought
Of Mendel's laws and genes;
Of chromosomes and DNA
And just what all this means.

Our little friend drosophila,
The little tan fruit fly,
Was quite a break for Morgan
When he kept on asking, "Why?"
And I declared, myself I dared,
To clear things up, or try.

It all began with Mendel,
A bright and country lad,
Who long dealt with heredity
And started quite a fad.

With bees he wed and peas he bred;
Results were quite unique.
But from mistakes the genius wakes.
Things weren't all so bleak."

Just like Thomas Jefferson and John Adams, Lewis Carroll, Alice Liddel, Alice in Wonderland and John Tenniel were all independent spirits seeking freedom with unique points of view in navigating the new world.

Alice is dreamy, savvy, and timeless. She seems to reflect the old world of the Victorian Age as well as the modern feminist activist. She's Jane Austen; Joan of Arc; and Lena Dunham. She's Rosie the Riveter and Gloria Steinem. In fact she was the original Champion against Bullies, insisting they are "all a pack of cards." She challenges the intimidating Red Queen, the Duchess and the Executioner, speaking up for the Knave of Hearts. Curious, dauntless, truthful and fearless, she stands up against Those In Charge. She's Lady Gaga, rallying for change, for challenge, for spearheading one's own path to freedom. She will not hold her tongue; she is never afraid to answer back.

Alice in Wonderland, a 7-year old Victorian girl who -- like the 13 colonists, the Continental Congress, Lewis Carroll, Alice Liddell, the White Rabbit, the Dormouse, and the Caterpillar -- remains eager, undaunted, trying to make sense out of nonsense. The story is applicable today on July 4, 2015...in terms of Presidential campaigns, world politics and global terrorism.

What would Alice say about Hillary's denial of e-mail trails; Governor Christie's ignoring Bridgegate; the Clinton/Chipotle debacle; Jeb Bush's referral to Obama's Alice in Wonderland foreign policy; the Mexican rapist rants of the Donald; and the ultimate in puzzle logic: who kicked whom out first, Macy's or Trump? In truth, Alice is stamping her charming little foot amidst a bizarre world in which the Queen's command, "Off with their heads," is too eerily close to Isis.

July 4, 2015 - In the middle of the terrace barbecue, I was thinking about Alice, Thomas Jefferson, Jefferson Airplane, and the White Rabbit, all marching to the tune of their own inner fife and drummers. All in the name of Independence.