Payrolls grew by 209,000 last month and the unemployment rate ticked up to 6.2% according to today's report from the Bureau of Labor Statistics.

The payroll gain was below expectations of around 235,000, and well below June's upwardly revised gain of 298,000. However, while the payroll number is somewhat disappointing, given the jumpiness of monthly numbers, it would be a mistake to conclude that the engine of job growth has significantly downshifted.

Given the monthly noise, it makes sense to take an average of the monthly payroll results. Below is this month's version of JB's Jobs Day Smoother, wherein I show average monthly job growth over the past three, six, and twelve months -- a useful way of pulling recent trends out of the bouncy monthly data.

The underlying pace of payroll job growth over both the past three and six months is about 245,000 compared to 214,000 for the year-long average. This suggests a moderate underlying improvement in the pace of employment growth, but the safest conclusion given the limits of the data is that the job market is solidly adding over 200,000 jobs per month. This is a decent pace of job growth, but given the existing extent of un- and underemployment, it implies the full employment is still years, not months, away.

Speaking of unemployment, it ticked up slightly from 6.1% to 6.2%, but for "good reasons:" the household survey, from which these data are derived, showed more job growth, but even more people entering the labor market. This last point takes me to one of the two data points I'd highlight in today's report.

First, and I'll have more on this later, there is some evidence that the all-important labor force participation rate may be stabilizing. It rose a tenth last month to 62.9%, but has wiggled between 62.8% and 63.2% since last August. If the firming job market has in fact arrested the decline in this key metric of labor supply, it will be an important and favorable sign.

The second highlight, which looks less favorable, is wage growth, a particularly important part of the economic story right now. From the perspective of working families, it's been a key missing ingredient from the recovery. Real hourly earnings for most workers have been largely flat, meaning income gains must come from more work, not higher real hourly pay.

From the perspective of the Federal Reserve, the fact that nominal wage growth has held steady at about 2%-around the rate of inflation--suggests that even with the evidence of recent tightening, considerable slack remains in the job market.

Today's report provides a clear microcosm of precisely this problem: average hourly wages were up 2% over the past year, the same pace at which they've been growing, and just about the rate of inflation, implying stagnant real earnings. Moreover, average weekly hours haven't budged since March, so that route towards growing real incomes hasn't been accessible either.

Summing up, while the lower-than-expected topline payroll number for July dampens the acceleration in job growth we saw in June, over the past six months payrolls are up just shy of 250,000 per month, a moderate pace. Importantly, the consistently, if ploddingly, improving job market appears to be arresting the worrisome decline in the labor force rate. If so, this will be an unequivocal plus for the recovery.

Finally, wage growth remains one very important area that continues to reflect the slack that still besets this job market. Until things tighten up a lot more, too many workers will continue to lack the bargaining clout they need to claim their fair share of the growth. 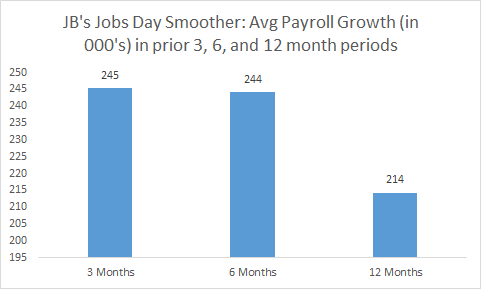