I'm at my highest weight since having babies. This happened quite by accident. Although 'accident' seems like I was oblivious to what was happening, which isn't entirely true. What's really real is that I've been enjoying eating all the things I love, haven't been working out regularly, and have been living in well-crafted denial about the inevitability of the scale ticking higher and higher. And because I love a good bandwagon as much as the next person, I've used the end of the holiday season as the marker for a new beginning.

I joined Weight Watchers when I needed to lose post-Dad-dying grief weight, and it worked like a charm. Rather, I worked it like a charm, and so was successful, -- which, it's becoming clear, is perhaps the whole point of this conversation: I gotta work it. And by "it", I mean ALL OF IT. I won't stay sober if I don't work my recovery. I won't get strong if I don't work out. And I won't ever fit into my jeans again if I keep eating fudge for dinner.

These things aren't complicated, but man can they be hard.

Oprah convinced me to sign up for Weight Watchers again (WHY IS SHE SO MAGICALLY MAGNETIC AND AMAZE), and this morning, I got up before 5:30 to work out in my living room. I'd slept in my workout clothes to dodge any "But changing into a sports bra is so hard...eh, I'll just go back to sleep," sort of excuses; I am excellent at convincing myself that the Universe is conspiring for me to comfortable and lazy at all times. Here's how things went down:

Me, first circuit: "You are too out of shape to do this. You will never be stronger or leaner. It's okay if you want to quit."

Me, second circuit: "Oh, those burpees were a bit faster than the first set. Maybe you just needed to warm up. Getting stronger takes more than twenty minutes, remember."

Me, third circuit: "That's nice, but YOU SHOULD BE STRONGER AND LEANER RIGHT NOW."

Me, fourth and final circuit: *Owns the heck out of it because maybe her mind isn't the best place for Emily to spend her time.*

Me, post-workout: *Sees sons flash cards on the island. Smiles and says thank you.* 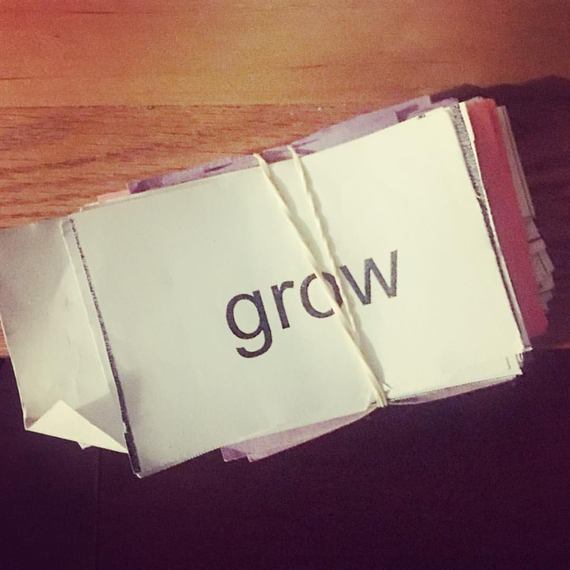 The mental space I've been in lately feels familiar; just like pain is pain is pain, anxiety is anxiety no matter which way you look at it. My anxiety used to manifest itself as obsession over whether or not I had a drinking problem. Then it switched over into believing I was ruining my children simply by existing as their mother. After that I moved on to how many people followed me on Facebook and how many likes each post got. Now it's me being terrified of what's on the other side of commitment to a sustainably healthy lifestyle. Well, it's fear partnered with my aversion to being out of breath and not getting to eat cake any time I want it. But mostly, it's the fear.

I've been in this place many times before - I'm getting healthy! It's Paleo this time! And exercise time! I'm losing weight and I feel great! I then fall into the trap of thinking I can maintain said great feeling by completely abandoning the practices that brought me there - phew...glad that's over. I've arrived! This is the pattern I'm working to break. I'm digging underneath the self-loathing that so often causes me to diet and sporadically exercise, in search of the root of the thing.

Which brings me back to fear. Is is fear of failure? Fear of watching the number on the scale continue to grow? Nope. This fear is both more complex and far more basic: I'm scared of meeting the me that's on the other side of this lifestyle change. Because it's not about my pants size or the number on the scale; me sticking to a new routine will signify a major shift in self-perception. It will signify healing. And for a girl who's used to defining herself by her broken parts -- who's long suspected that there's something bright and powerful on the other side of her own healing -- coming face to face with a self-created stranger is an anxiety-provoking prospect.

WHICH IS FUNNY BECAUSE MY ANXIETY IS BEING PROVOKED.

My husband and I once got in a fight about a fork. That's the only detail I remember about that argument - it was precipitated by a fork. I'll give you a moment to get your head around that before asking the obvious question: do you think we were really fighting about a fork? Of course we weren't. The fork was simply the object that provided the illusion, that distracted us from the real issue, whatever it was. And illusions aren't real magic - they're lazy miracles.

I'm not interested in illusions anymore. Instead, I'd like to meet the stranger I'm working to create.