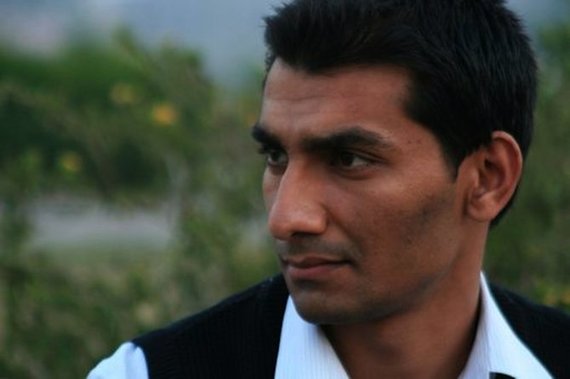 Located in the south of Punjab, Rajanpur is the poorest district of Pakistan's largest province. Over half the population lives below the poverty threshold and two-thirds lack a primary school education. It was into this bleak rural landscape that Junaid Hafeez was born and where his edifying story begins. At the age of 16 he had completed a Secondary School Degree with an "A1" score-the top percentile among all students. In 2003 he was top of his class for his Intermediate (two year College) Degree in Premedical Studies. In 2009 while pursuing a joint degree in English Language and Literature from Bahauddin Zakariya University in the city of Multan he became one of five students from Pakistan selected for the regional Undergraduate Exchange component of the Fulbright Scholarship. Under the program he spent a year in Jackson State University in Jackson, Mississippi studying theater, photography and English literature.

While in Mississippi, Hafeez acted in and directed several plays and excelled in his studies. After two semesters in the U.S., he returned to BZU Multan in 2011 as a graduate student and visiting lecturer in the English department, while also teaching at the College of Design. He returned to his University in Multan with a passion for teaching and social activism. After graduating valedictorian he immediately applied for a teaching position. For two years his flame burnt bright as he introduced courses on creative writing and linguistics at his university, directed and acted in ten plays, made several appearances on television and translated five Urdu works into English. This trailblazing journey came to a halt on March 13, 2013 when he was accused of blasphemy by several of his students belonging to the largest religiopolitical party of the country, the Jamaat-e-Islaami. A protest on campus followed and the University immediately buckled and terminated Junaid's teaching contract. An arrest followed and formal charges of blasphemy were filed focusing on alleged remarks made by Junaid during his lectures at the University and through a Facebook account-that continues to be active after the arrest and which is yet to be directly linked to him. Junaid's first lawyer Mr. Chaudhry Mudassir excused himself from the case after anonymous death threats as well as pressure from within the lawyer community. His second lawyer Rashid Rehman Khan refused to abandon the case despite experiencing similar attempts at intimidation. Mr. Rehman had a reputation for taking on cases that no other lawyer dared to touch and was a hero in the Pakistani human rights community. In the land where no good deed goes unpunished, he was shot dead in his office on May 7, 2014.

A source close to the case who requested anonymity due to safety concerns informed me that when Junaid's current lawyer Mr. Shahbaz Gurmani first approached him to offer his services Junaid pleaded with him not to get involved in the case. The death of Mr. Rehman Khan had profoundly affected him and he was terrified of anyone else risking harm on his behalf. He had also lost all hope of receiving justice. When Mr. Gurmani made it clear that he was determined to take the case and refused to take no for an answer, Junaid proceeded to say a somber prayer for him before accepting his services. According to the source Junaid has since been more positive and has engaged earnestly in helping his lawyer with preparing his defense.

Mr. Gurmani has also received multiple death threats for taking on the case and on one occasion in 2014 gun shots were fired outside his residence in Multan. A social activist and philanthropist since the age of 18 Mr. Gurmani has since, despite the attempts at coercion, taken on two more blasphemy cases and formed an organization called New Vision Foundation that litigates and lobbies for women and children's rights. Mr. Gurmani and the late Mr. Rehman are the sort of individuals that make it impossible to lose faith in humanity and who illustrate the fact that there is no greater beauty in the world than moral beauty.

Junaid Hafeez chose to forego greener pastures to return to his alma mater and his roots in Southern Punjab. He brought literature, drama and political activism to the young men and women he believed deserved the same education and opportunities he had received. He wished to inspire his students to be freethinkers, the progressives that would change the fortune of the nation he loved. For this he has been repaid with a jail cell in Multan.

Pakistan's blasphemy laws originated under British rule; in 1927 insulting any religion became a punishable offence in India. Punishment consisted mostly of fines and brief imprisonment. After the creation of Pakistan in 1947 this law was retained in the nation's penal code. Under the administration of General Zia-ul-Haq the punishment for blasphemy was first changed to life imprisonment and finally in 1986, to death by hanging. Blasphemy laws are not merely a draconian enterprise that is abused by individuals and governments to settle personal scores; they are the specter looming over anyone who dares to debate the clergy on religion. They are the insurmountable barrier to the progressive exegeses of faith that could counter the extremist narrative. Suffice it to say that Pakistan's blasphemy laws are the Moloch that devours free speech in its pale maw.

A brilliant young man who strove to serve his country is languishing behind bars and facing charges that carry the death penalty. A selfless champion of human rights has been killed for trying to defend him in court. Out of fear, the Pakistani media remains muted on this unconscionable injustice. For those of us who can speak out though, silence at this point is unforgivable.

Pakistan is complex, enigmatic and tragically far from fulfilling its potential. History has demonstrated that lasting progress is only possible in societies that evolve through the free exchange of ideas and where knowledge and power is not subject to the control of a select few. To begin making this possible, Pakistan must cease silencing and murdering its finest children.