What's a typical 8:00 am activity? Sleeping? Enjoying breakfast? Dashing off to work? Well, if you were Lillian or Clarence, and the year was 1896, you were reciting your wedding vows at that bright and early hour.

Lillian Popenoe and Clarence Hall married on June 17, 1896 in Lawrence, Kansas. But while expecting your guests to show up in all their finery at 8:00 am on a Wednesday morning may seem like a prank on the wedding guests, it's nothing when compared to the inventive "gotcha!" the guests played on the bride and groom later that morning.

With the outside world engaged in typical early-morning bustle, the strains of Mendelssohn's "Wedding March" filled the air in the home of the bride's parents, and the ceremony unfolded before a greenery-adorned parlor mantle. Following the nuptials, guests enjoyed an intimate wedding breakfast amidst an array of sweet peas and potted palms. Perhaps the early event was just a normal occurrence in an area where farmers rose before daybreak to tend to their crops, and where late nights were decidedly uncommon. But more than likely, the wedding was planned to coincide with the tight schedule of Santa Fe train #5, for at 11:00 am, the newlyweds were all aboard and about to embark on their honeymoon trip to the glorious mountain peaks of Colorado, a journey that would first take them through Fort Worth.

It was just before that 11:00 am departure that friends of the couple executed their well-planned caper. As a Pullman car conductor on the Fort Worth leg would later relate to The Arkansas City Traveler, the prank "...made the couple blush and fidget, turn red then pale, and look uncomfortable in their seats." And it was all because of a small boy scurrying from traveler to traveler, handing out light green cards to every passenger on the train. The card read: 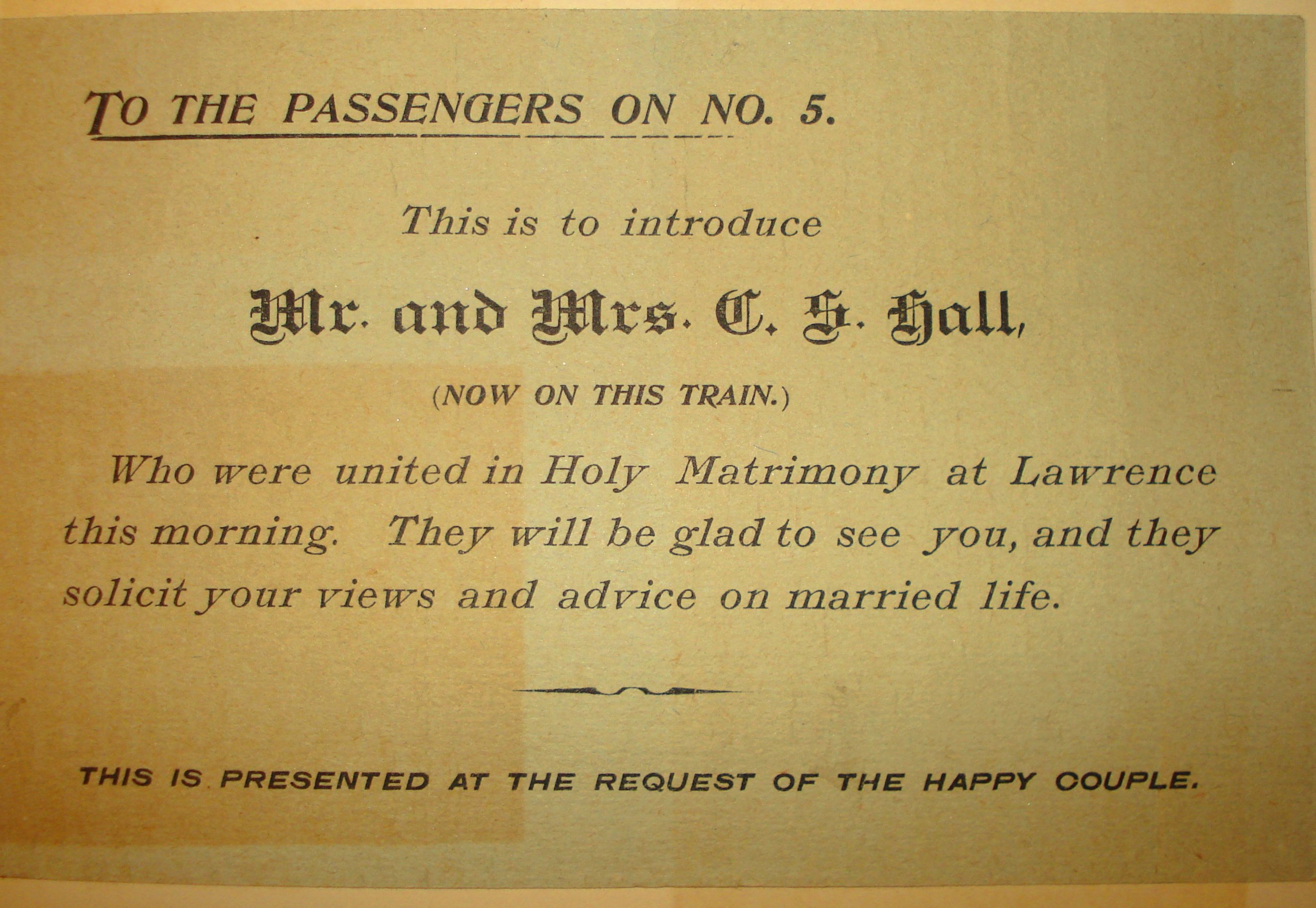 The Pullman conductor stated that the cards caused the passengers to grin and laugh and focus their attention en masse upon the newlyweds. Unfortunately, the couple didn't help themselves a bit as they tried too hard to not act like newlyweds at all, or as the conductor described it, "They...possessed that indefinable something that marks the new-made man and wife and sets them apart for the world to gaze at with rapture. They were conspicuously overplaying the part of a couple who had been married ever since Noah rounded up the animals and gave the idea for the modern circus. They too-evidently wanted the passengers to understand that they had been married for years innumerable, and of course the result was that they were immediately spotted for the bridal pair."

Eventually, one brave soul came forward to hand one of the cards to a groom all too acutely conscious of the amused scrutiny aimed in his direction. In the conductor's words, the groom accepted the card "...glanced at it, took in the awful import of the words, shut a wicked swear word behind his teeth and fled to the smoker." The bride picked up the card from the groom's seat and read it, and the trainman relates that "...she didn't faint. She didn't cry. The full import of that ridiculous card flashed upon her mind, and she broke into a laugh that made the listeners think of soft bells sweetly chimed..." When the new husband reappeared everyone was glad to see him in good humor, and he, a Lawrence Journal newspaper man himself, later confessed to The Denver Times that he ultimately enjoyed the joke played on he and his bride on their wedding tour.

When all was said and done, and the story had been recounted in multiple periodicals, there was time to reflect. The couple may not have had a moment's peace on that honeymoon train excursion, but they probably made a few new friends along the way. It was an inspired prank, especially in an era when no one ever smiled for the camera. It's nice to know that a collective sense of humor was alive and well in 1896, at least in Lawrence, Kansas. At the time, the couple may have been uncomfortably caught off guard by the prospect of a train-full of strangers bent on burning their honeymoon ears with the ins and outs of marriage, at least the ins and outs that were relevant to the advice-givers, but it's probably fair to say that Clarence and Lillian laughed about it for years to come. The cleverly accomplished antic clearly made an indelible impression upon the wedding couple, because the bride would later immortalize the event upon several pages in her personal bridal memory book.

This long ago experience begs the question. When is a wedding prank just right, and when is it just too much? Is it all in good fun, or is it all in poor taste? The answer no doubt lies with the personalities of the bride and groom, as well as the timing and intent of the prank. Surely any prank committed during the ceremony itself, or one that is not executed from a place of genuine affection, is taboo. But are wedding pranks fair game otherwise? Whether the bride and groom are pranked by loved ones, or they are the ones doing the pranking, a bit of wedding levity can easily foster a rare, unexpected memory. But if it goes too far, it can ruin an otherwise fairytale experience. Wedding pranking definitely requires a deft touch.

What do you think? Were you pranked at your wedding? Would you prank others at theirs? If you are not yet married, how do you think you would react to shenanigans during your oh-so-important festivities?

For Lillian and Clarence the prank initially brought blushes and dismay, then smiles, laughter and priceless memories. Perhaps that's the lesson. Perhaps an act that culminates in that certain emotion known as a happy memory is the hallmark of a perfectly-executed touch of wedding tomfoolery.

More:
marriage adviceweddingsMarriageNewlywedsfunny wedding
Newsletter Sign Up
A weekly guide to improving all of the relationships in your life
Subscribe to HuffPost’s relationships email
Successfully Subscribed!
Realness delivered to your inbox