June was one of the hottest such months on record globally, based on newly released data from NASA and the National Oceanic and Atmospheric Administration (NOAA). The month extended the unbroken string of warmer-than-average months to 340, or a stretch of more than 28 years. That means that no one under the age of 28 has ever experienced a month in which global average temperatures were cooler than average (based on the 20th century average).

Global average surface temperatures during June were either the second or the fifth-warmest on record for the month, based on analyses by NASA and NOAA, respectively. The two agencies keep tabs on global temperature trends using large networks of surface monitoring stations and statistical approaches to fill in gaps where stations are sparse, but they use slightly different methods to analyze the data, which can result in slight differences in their rankings. 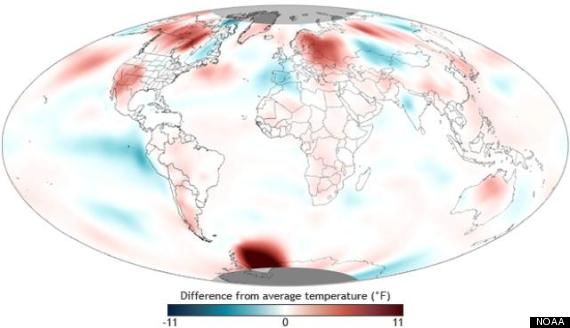 June continued the long-term warming trend tied to manmade greenhouse gas pollution as well as natural climate variability. The planet has not recorded a single month with temperatures below the 20th century average since February 1985, when the cult classic film “The Breakfast Club” was released, and the last year with a cooler-than-average June was in 1976. This year so far is tied with 2003 as the seventh-warmest year on record, NOAA said.

Last month featured unusually wet conditions in the eastern U.S., and tragically wet conditions in northwest India, where rainfall that was 200 percent of average inundated parts of the state of Uttarakhand, killing nearly 6,000 and causing widespread destruction. Areas that experienced higher-than-average temperatures during the month include north-central Canada, most of Alaska — which had its third-warmest June on record — and the Western U.S., where about 80 percent of the region was in some stage of drought by the end of the month.

According to NOAA, global land surface temperatures were the third-warmest on record, while ocean temperatures were closer to average, coming in as the 10th-warmest on record. An area of cooler-than-average waters in the eastern tropical Pacific may be acting to dampen global temperatures slightly, although NOAA experts said on Thursday that neither an El Niño nor a La Niña event is taking place, and one is not likely to take place through the fall. Such naturally occurring climate cycles can influence global weather and climate conditions, and can alter global average temperatures on shorter timescales than manmade carbon pollution, which studies have shown is most likely responsible for the long-term increase in global surface temperatures. 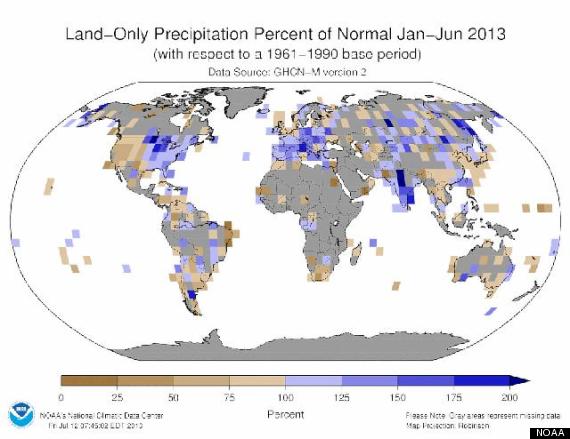 A recent report issued by the World Meteorological Organization found that nine of the 10 years between 2001-2010 were among the 10 warmest years on record for the globe, based on that organization's rankings, which can differ slightly from NOAA and NASA's rankings.

In the U.S., June was yet another month of extremes, with a scorchingly hot and dry West contrasted with a record wet and relatively cool Midwest and East. In all, 18 states had a top 10 wettest June, with Delaware and New Jersey setting records for the wettest such month since record keeping began there in the late 19th century. Utah, on the other hand, set a record for its driest June, with a statewide average precipitation of barely a few drops — just 0.01 inches of rain.

The stark contrast in precipitation between the West and areas east of the Mississippi River has held true for much of 2013, with California having a record dry start to the year, while four states in the Midwest were record wet for the same period. California has had just 31 percent of its average precipitation for the year, said Jake Crouch, a climate expert at the National Climatic Data Center, on a conference call with reporters.