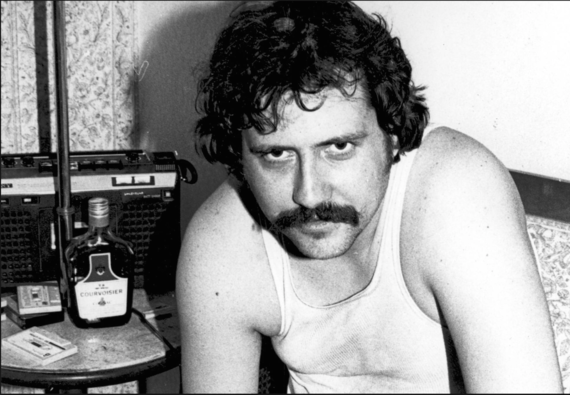 Hello, this is Ben Fong-Torres. Congratulations on your new show, I'd love to do an interview with you if you have the time this week. Just let me know. And again, congratulations, as a listener of yours I think it's great...

What? THE Ben Fong-Torres wanted to talk to me. The guy the movie Almost Famous is about, the guy that's spent time in hotel rooms with superstars? You see, as a writer for Billboard and other publications, he was a rock star to me. Because he was, and is, a ROCK JOURNALIST. This guy had the creds, this was no blogger, no frustrated musician with a grudge, this was the real deal. He lived the life, and survived.

So did Lester Bangs, in fact, they were contemporaries. I didn't know that until I saw the photos as part of the lobby display of How to Be a Rock Critic at the Center Theatre Group's Kirk Douglas Theatre Rehearsal Space in Culver City, CA. It only runs for a few more days, until June 28th so you have to go now.

Jensen as Bangs in the Production

The intimacy of the theatre works for this production. It's a one man show, starring Erik Jensen, who created it based on the writings of Lester Bangs with partner Jessica Blank (who directs). Bangs was a writer at Rolling Stone and Creem. He was called at one point the greatest American Rock critic and was influential in the genre; in fact, he is credited as first using the term "punk" to describe, well, what would become Punk Rock.

Bangs was born in Escondido, CA and after a rocky childhood answered an ad in Rolling Stone for reader's reviews. He would soon become a scathing critic, demanding musicians give Rock the respect he felt it deserved as a genre, and when they didn't in his eyes, he unleashed his pen. In fact, in 1973 Jann Wenner fired him for "disrespecting musicians" after a harsh review of Canned Heat.

He died of an overdose at 33 and lived a life one would expect of a successful Rock critic in the late 1970s and early 1980s.

Jensen invites us into his living room, a mix of vinyl and beer cans, he breaks the third wall completely and starts a dialogue not just about music and the importance of Rock to so many, but about his struggles and inner demons. He devolves on stage, from gracious host to drunken, drugged out missionary on a journey to make us all see how most everyone and everything about Rock sold out in his mind, how few got it, but when they did, it was transcendental.

In keeping it intimate Blank and Jensen have made it raw at times, uncomfortable. We almost don't want to see his destruction, his rants getting deeper and more etherial with ever pill he takes.

"Screw a diary, you can tell all you need to know about a person from their record collection..." he says walking to the turntable to put on yet another hit now classic but fresh in his time. And he couldn't be more right.

Banks lived hard, drugs, alcohol, sleep deprivation, a true Gonzo journalist in the spirit of Jack Kerouac instead of a music journalist. He was fearless, or stupid, often it's a thin line.

Jensen as Bangs makes us examine music's role in our own lives, as it provides a soundtrack for almost all of our most private moments: alone in the room, sad, depressed; partying with friends; needing inspiration or simple distraction. Music has a special place in the lives of humans and there was a time, those that covered it were as known and famous, or infamous, as the people they covered.

But the life caught up and Bangs left early, as Jensen portrays him simply falling off to his favorite record. Bangs was crestfallen at death, as portrayed by Jensen. The rebellion of Rock, of the early rock of the 60s and 70s gave way to the corporate rock of the 80s and to Bangs it was the biggest breach, the breaking of the Rock commandments, thou shalt not sell out. When it did, he checked out.

Jensen makes a drug-addled character with a giant chip on his shoulder approachable, understandable, even likable. His monologues, while often humorous, each have dramatic weight and one realizes by the end that Bangs had to die in the chaos. The ordered, structured world of music that was emerging, of accountants running record labels and critics toning down interviews and reviews to drive up advertising revenues of the magazines in which they were published was not a world in which he could live. I know, it was in the early 80s that I started writing reviews of plays, movies and music. I would go on to be on the pages of some of the same magazines as Bangs, and magazines went from creative dens of nearly insane people with drugs and alcohol around the office even, to entities housed in glass towers with writers in suits and editors in Mercedes. There's truth in what Jensen is saying as Bangs, music has suffered under the hands of huge corporations, creativity not encouraged unless focus groups say and radio adhering to strict formats and playlists consisting of 30 songs. DJs can't break records any more and critics certainly can't consistently lambaste them if they want their jobs.

Jensen's peak into the mind of Bangs by using his own writings brings to life a character that any lover of classic Rock music should not only want to see, but should serve as a warning to anyone that becoming too consumed by anything, including your art or music, can be deadly.