Today's jobs report was a bit weaker than expected, and a bit weaker than it looked at first blush. While payrolls were up 223,000 in June, in line with expectations, and the unemployment rate fell to a record low in this recovery of 5.3 percent, mitigating factors include:

-- downward revisions in payrolls for April and May of 60,000 combined;

-- the fall in unemployment was exclusively due to people leaving the labor force, not jobseekers finding work;

-- thus, the labor force participation rate ticked down a significant 0.3 percentage points to 62.6 percent, its lowest level since the late 1970s, though see below re: this important trend;

-- hourly wage growth was flat in June, and is up 2 percent over the past year, a slight deceleration from last month's report;

-- factory employment growth remains weak, up 4,000 and little changed over the past five months (construction was also a weak spot in June, adding no net new jobs).

On the upside, the payroll gains continue to be solid, with employers hiring north of 200,000 workers per month on average (see smoother analysis below), and hiring was robust across much of the service sector. The number of involuntary part-timers continues to decline, and is now down about a million from last year. Long-term unemployment continues to decline as well.

The decline in June's labor force could, of course, be monthly noise, and in fact, the BLS noted that this variable tends to volatile this time of year, as more people than usual are churning in and out of the job market. There's also an important structural dimension to the decline in the LFPR, as the older age composition of today's workforce renders comparisons to the 1970s not particularly valid. But as the job market has gradually tightened, I've expected to see some upward movement in the LFPR, as labor demand pulled more people into the workforce. The fact that this has yet to occur suggests that there is much more slack than the 5.3 percent unemployment rate suggests.

To get a better feel for the underlying trend in net job creation, we turn to our patented smoother chart showing monthly averages over 3, 6, and 12 month intervals. Over the past three months, payrolls are up about 220,000 per month, about the same as June, and a slight deceleration from 12-month trend.

As noted, that 220K trend represents a solid pace of job growth that will eventually, if it persists, help to squeeze out the remaining slack in the job market. But the relatively weak wage growth, the strong-dollar induced weaker manufacturing sector, and the lack of growth in the labor force tells that this is not a "5.3% job market."

That rate happens to be just about what the Fed considers to be the unemployment rate commensurate with full employment, and based on the bullet points above, that can't be right. For example, surely, if we were this close to full employment, we'd see more pressure on wage growth. The fact that we clearly do not tells us that a) the measured unemployment rate is biased down, and b) the Fed is having trouble figuring out the natural rate.

That, in turn, implies that talk of raising interest rates is simply premature, full stop. I understand that rates have been very low for very long, and that many Fed critics (and a few Fed governors) are champing at the bit to raise. But when Chair Yellen says they're "data driven," I believe her. And the data--while not bad by any means--are not yet consistently strong enough to warrant a change in interest rate policy. 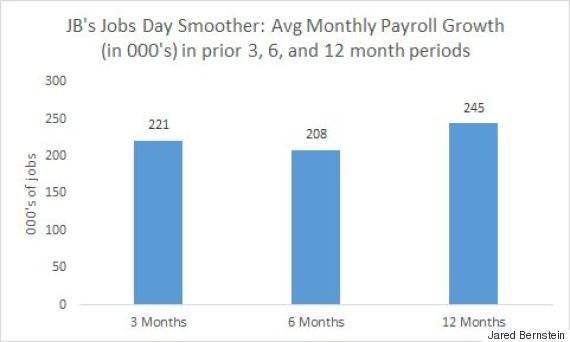