If festivals like Coachella and Hangout Fest haven't gotten you in the festival spirit yet, the month of June packs a pretty big punch for summer music fans. Due to huge popularity this spring, the majority of the major festivals scheduled to launch this month are sold out of weekend passes. Luckily for last-minute buyers, the secondary market has tickets for every event. Below is a guide to festival ticket buying this month, with ticket information provided by TiqIQ.

It doesn't get much bigger than the New York City-based festival Governors Ball, even with the addition of Panorama Fest later in July. This year's event will launch June 3-5, and will feature a stacked lineup with artists like Kanye West, the Strokes, the Killers, Robyn, M83, Haim, Chvrches, Father John Misty, and Death Cab For Cutie. The six-year-old festival will be held on Randall's Island and weekend passes have already sold out entirely. On the resale market, a 3-day pass is currently up for grabs for $295, and weekend passes average $435.

If you haven't heard of Bunbury Music Festival yet, 2016 will likely be the year the festival hits your radar. This year's lineup will feature The Killers, Florence + The Machine, and Ice Cube at the top of the bill, and passes are some of the cheapest yet. Based out of Cincinnati, the fifth year of Bunbury will take place the same weekend as Governors Ball, launching June 3- June 5. 3-Day Passes for Bunbury Music Fest sold out back in April, and so fans looking to attend for the whole event will need to utilize the secondary market. 3-day passes are averaging $487, with the cheapest pass going for just $187.

Houston's Free Press Summerfest is one of the few music festivals this month that still has weekend passes available -- although they may not last through the week. The festival's seventh year will feature acts like The National, Leon Bridges, Young the Giant, deadmau5, Edward Sharpe and the Magnetic Zeros, Modest Mouse and Refused across Saturday and Sunday. Face value passes are available for purchase for $157.50, and resale passes start for as low as $135. For fans who want to skip out on the camping festivals, Free Press in Houston's Eleanor Tinsley Park is one of the most affordable options of the year. 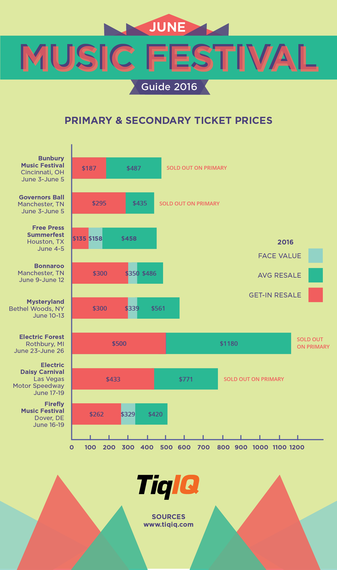 Pearl Jam, Dead & Company, LCD Soundsystem, J. Cole, Ellie Goulding, Macklemore & Ryan Lewis are just a few of the names that will take the stage at the Manchester, Tennessee-based festival Bonnaroo. The 15-year-old event has one of the most stacked lineups of the summer, and 4-day passes are pricey for good reason. Face value passes are still available, and can be purchased for $349.50. On the resale market, passes are averaging $486, with the cheapest pass going for just $300.

Upstate New York will come alive with the electric sounds of Mysteryland on June 10-13. The festival, which got its start in 1993, is widely known as the longest running electronic dance music festival in the country. The festival is currently held at the site of the 1969 Woodstock Festival, and will feature Odesza, Skrillex, Bassnectar, and dozens of other EDM bigwigs. Face value passes are still available, and are currently priced at $399. Weekend get-in passes are slightly cheaper, and are up for grabs for $300. Weekend passes are averaging an impressive $561, so buyers are encouraged to purchase before it's too late.

Going into its fifth year, Delaware-based Firefly will boast huge names like Mumford and Sons, Kings of Leon, Florence and the Machine, deadmau5, Blink-182, ASAP Rocky, CHVRCHES, Disclosure and Death Cab For Cutie. Weekend passes are still available, and can be purchased for $329. On the resale market, weekend passes are averaging $420, with the cheapest pass going for just $262.

Launching in Los Angeles in 1997, Electric Daisy Carnival (EDC) in Las Vegas has become one of the festival's most sought after destinations. This year's lineup at the Las Vegas Motor Speedway will feature artists like Eric Prydz, Seven Lions, Jauz, DJ Snake, Dada Life, Above & Beyond, the Chainsmokers, Tiesto, and more. Primary passes for the weekend are entirely sold out, and resale tickets aren't cheap. As it stands now, a weekend pass is averaging a whopping $771, with the cheapest pass priced at $433.

EDM festivals this summer won't get much cooler than Electric Forest in Rothbury, Michigan. With innovative art installations, unique camping areas, and dozens of events for attendees, the woodsy music festival is understably sold out. Headliners for this year include The String Cheese Incident, Bassnectar and Major Lazer, and countless other acts including The Disco Biscuits and Beats Antique will take the stage. Weekend resale passes are averaging a whopping $1,180, and the cheapest weekend pass is up for grabs for $500.