Although you've been intimate with it since, erm, forever, how well do you really know your skin? Can you recognize its wrinkles and creases? Could you place its moles, scars and stretches? In his "Torso Series," South Korea-born, Pennsylvania-based artist June Yong Lee explores how well we really know the skin we're in, transforming familiar bodily forms into alien slabs of flattened flesh.

Lee begins by photographing a stranger's torso from all angles; he finds most of his subjects on Craigslist. He then uses Photoshop to stitch and meld digital images, working from the body's center and moving outward, until all contours and curves melt into a single, black-and-white plane of uninterrupted skin. The skins' lines, tattoos, and spots, so often hidden from view when resting atop a skeleton, are offered up to the viewer like drawings in a sketchpad. 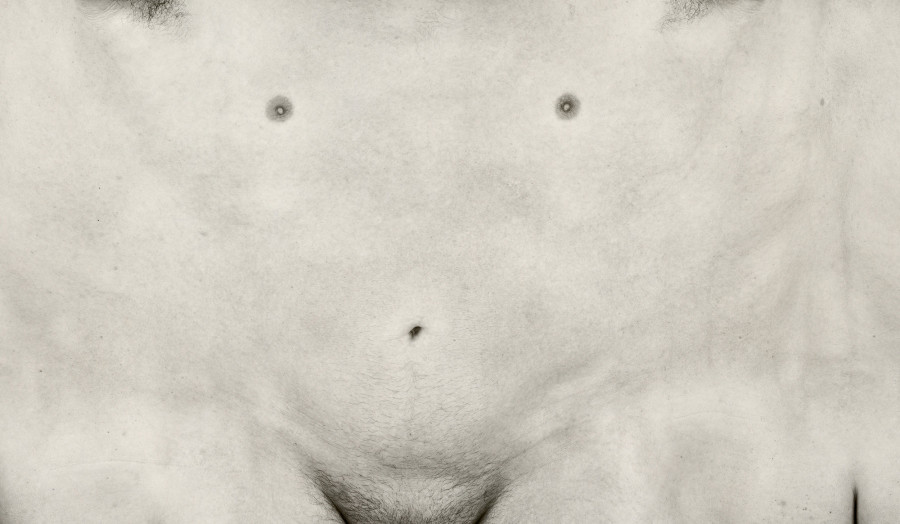 The resulting images are surprisingly strange, considering they're made of the same stuff we are. But flattened out like a hunk of dough or an ancient manuscript, these anonymous floating torsos look almost otherworldly. "The images seem to blend the antique tonal richness of early Victorian photography with a morbid sense of modern forensics," Ellyn Ruddick-Sunstein writes in BeautifulDecay. "As if recovered from an ancient autopsy, the slabs of flesh are somehow mournful yet objective and scientific."

"This project grew out of my interest in skin and personal identity," Lee wrote in an email to The Huffington Post. "Each photograph contains stories of each model through their visual markings on skin. Skin is [the] outer layer of us that separates or connects from who we are to the world outside. We are born with it, and skin is the biggest organ that we have. Skin defines and dictates who we are. We judge and categorize people by it. Also, it is a physical record of our life. Whether markings on skin are permanent or temporary, intentional or unintentional, skin carries our stories in a much different way than memories in our mind. I’m fascinated with skin and its characteristics."

Each of Lee's subjects appears splayed open before the viewer, as legible as a sheet of paper. They are presented without names or background information, leaving the images written on the skin to speak for themselves. The torsos, despite being presented in a manner so viscerally lucid, refuse viewers the information we so often expect of skin -- ethnicity, age, information. Instead they offer up a visual story that's far more complex.

"Even though it may not be so apparent at first, I think 'Torso Series' is deeply rooted in notions of race, identity and portraiture," Lee explained in an interview with Afterimage journal. "Presenting skin in this unusual and unfamiliar way asks viewers to focus on the surface of skin," Lee continued. Every textures, markings, scars, and tattoos entail stories of each person. Ultimately I hope we understand ourselves better."