He "stood me up". By then I was starting for USC on special teams but still doing scout team duty. This time I was a Tailback and ran full-speed at Sean Junior Seau.

He wasn't an inside backer then. They had him at outside linebacker and I came with the full intent of running him over. BAM! That was stupid. He shed the tackle and cleared all of my sinuses. I straightened from the hunch of a running back to an upright flag bearer position. The only reason he didn't tackle me was that he forgot to wrap. We were both yelled at. I was "stood-up" but didn't try to score. Junior was supposed to tackle and finish the job. It was expected of him. 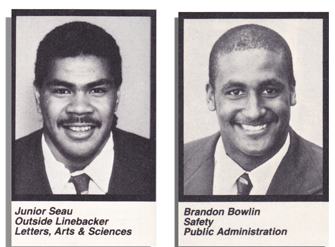 Seau was a star. One sharing an extraordinary constellation of Samoan Americans in the NFL. After a poor scholastic start, he ended up being exactly what everyone thought he should've been: a great professional football player. Although he wasn't the only Samoan to have played at his level, until Polamalu from the Steelers, he was the most famous.

Fame. I'm gonna put this out there: after a few games I bet that mattered little to him.

Football is a dangerous sport. It is the closest thing that we have to open gladiator tournaments. I know people say that about boxing and ultimate fighting. Those sports are brutal, but there's only one other guy to deal with. In football, if you're Junior Seau, except for maybe the quarterback, there are potentially ten other guys who want to eliminate your abilities from the board. So, say you do shed that pulling guard, maybe there's a fullback right behind him or a screen block from an H-back or even an illegal crack from a wideout. And maybe you survive it all by stepping to the right and forward to stop a tailback's route. And you do your job... but who's to say that this isn't what the opposing team wants you to do when, five plays later, they run the same thing but drag a tight end behind you for a shallow pass and 15-yard gain.

All of this happens with the heat of bubbling adrenaline that accelerates when you defeat the odds. When, after months of training and a near lifetime of perfecting, recognizing and reacting in this great game, it all comes together... this play. Thirty seconds later, you put it all in on the line again.

I met him exactly three times since my days at USC. He seemed happy and cool. We never talked long; the last time he said that he had seen me on TV... like he wasn't on every weekend. I thought that was strange.

I can imagine that there are many reasons people kill themselves. I would guess that 90 percent of the time, unhappiness has a lot to do with it. I have lost at least one close friend to suicide. But he didn't play pro football nor was he a millionaire and hero to thousands of kids. So it should be more complicated in Seau's case, right? In our culture, especially today in such a locked-down economy, money and fame should be life's panacea. In fact, a whole subculture of dysfunctional voyeurism has blown up behind that fallacy: that acting crazy will get you paid and keep you sane.

But playing for USC put me in contact with a few men who went on to play in the NFL and had to give up the game in their 20s and 30s. And they all, to a man, shared some kind of dip in their spirits.

Moreover, depending on who you are, the dip might be a valley. Terry Bradshaw talked about post-game anxiety and depression. About how, after a game and once the action stopped, he felt empty. Even after winning Super Bowls.

This may explain why men, with more money than they need, continue to put already battered bodies on the field for dissection. Why an awkwardly mobile Brett Favre would continue to take hikes and run plays with all the grace of a drunken horse barely able to round a bend while young and hungry wolfish Linebackers hunted him down. It would explain why a twice-in-the-neck-surgery(ed) Peyton Manning, with tremendous personality and huge potential post-career announcer acumen, would suit up again. Even though a doctor can cheerlead about the mundane effects of herniated disc neck surgery, it's still a neck injury.

And Peyton still plays in the NFL... with young Seaus lurking everywhere.

I love the game but maybe we should try to uncover what happens when they have to stop. Literally. When they have to sit and deal with themselves alone. No team. No crowds. No whistles. Maybe we should sit down with vets (from college on up) and their families and ask... what happened to you when it was over? Did you have mental problems? How did you get past them? Bradshaw, Walker, Williams say that they didn't know what was happening. Is that it? Anguish is just a silent partner playing with you in the NFL?

So far eight players from that illustrious Chargers team of '94 have died. All too young. Some will claim curse. Some will postulate unfounded theories that Seau may have had head trauma or even post-steroid depression. Or that he was in a personal and individual tailspin as evidenced by domestic problems and a suspicious vault he took on October 18, 2010, when he drove his SUV down a rolling cliff in Carlsbad, California. Some will say, "To hell with this".

I don't know. But this makes one wonder how many NFL players are chasing a dream or running just ahead of their depression. Yet, if we never attempt to find out, it might go down in some log that Junior Seau retired and then... only did what was expected of him.

I hope not. Rest In Peace.