He is revered within the Catholic Church, and Pope Francis announced recently that he will canonize Serra, likely during a trip to Washington, D.C., this fall. That pronouncement has opened old wounds for many Native Americans in California and beyond. They say Serra wiped out native populations, enslaved converts and spread disease.

Since Francis' announcement, Indian groups have staged weekly protests, posted YouTube videos and started an online petition demanding the pope rethink his decision. At rallies outside Our Lady of the Angels Cathedral in downtown Los Angeles, about a dozen protesters wore black T-shirts and beat drums while chanting "Serra was no saint! Serra was the devil!" and holding signs that compared the missionary's actions to genocide.

"I'm outraged," said Olin Tezcatlipoca, director of the Mexica Movement, an organization that educates the public about indigenous rights. "This is sad because supposedly this pope is more enlightened and more progressive. This came as really shocking."

Serra, a theology professor by training, was tasked in 1767 with expanding the Catholic mission system from Mexico's Baja California into what is now the state of California and converting the Indians he encountered. In 1769, he established his first mission in San Diego and ultimately founded eight of California's 21 missions — from San Juan Capistrano to San Francisco — before his death in 1784.

In the ensuing decades, diseases brought by Europeans and their livestock ravaged native populations. Indians who converted, often just to get access to food or shelter, were not allowed to leave mission grounds and were flogged and shackled as punishment. Within 50 years, the Indian population dropped from 300,000 to 200,000 and fragmented tribes lost touch with their traditional languages, beliefs and way of life.

About 5,000 Indians were baptized during Serra's lifetime and tens of thousands more would be before the end of the mission era in the 1830s. 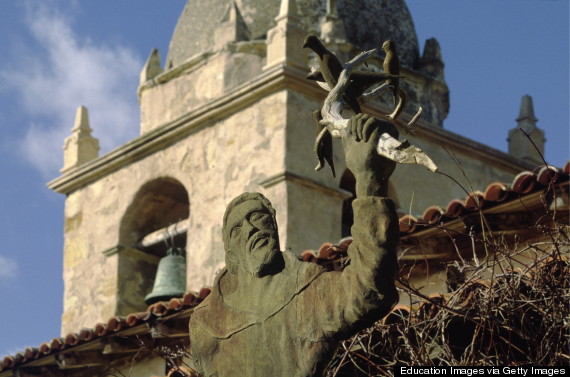 Wooden Carving Of Father Junipero Serra, The Founder Of The Carmel Mission, California.

To Ron Andrade, a member of the La Jolla Indian Reservation, what Serra's work wrought makes him unworthy of sainthood.

"We have lost translations of our historical songs," said Andrade, director of the Los Angeles City and County Native American Indian Commission. "That's because of Serra. That's because of the church."

Serra is far from the first controversial candidate for sainthood or canonization.

Pope Francis has said that he fast-tracked Serra's canonization by eliminating the need to show proof of two miracles because the missionary was such a great evangelizer.

Serra believed he was a more moderate version of the missionaries he saw in Mexico. He thought of the missions as refuges that could protect Indian converts from unscrupulous miners, ranchers and soldiers who roamed what was then Spanish territory.

He supported flogging converts who tried to escape the mission, but he meted out the same punishment to Spanish soldiers and practiced self-mutilation in the name of penance.

Serra's letters show he was often at odds with the colonial government in Mexico City and had to fight for supplies for his expanding chain of missions, said Robert Senkewicz, a history professor at Santa Clara University who co-authored a book based on translations of Serra's writings.

"History is always a kind of a dialogue between the past and the present and from the point of view of Serra in his own time, what he genuinely thought he was doing was providing the native populations with a kind of protection," Senkewicz said. "His writings are filled with indications about what he thought he was doing."

For some, the debate over Serra's sainthood can help Californians better understand their state's complex history — and possibly start a dialogue between Roman Catholics and their critics.

"People have a right to be angry and be concerned about all this and yet this canonization is going to go forward," said Dr. Jeffery Burns, director of the Academy of American Franciscan History.

"By making Serra a saint, we shouldn't be affirming that everything he did was right," he said. "I think this uproar offers a unique opportunity to Pope Francis and the bishops of California to really own up to this and begin a process of reconciliation."

1 / 9
Ireland
Saint Patrick is the patron saint of Ireland (and, of course, of Jersey City), in memory of his powerful evangelical presence among the people of that land. His "feast day" is March 17, the putative date of his death.
MediaWiki