ERIE, Pa. -- "One man's junk is another man's treasure," goes a old proverb. That's certainly true for one northwestern Pennsylvania man: His creative instincts have turned his front yard into a veritable open-air gallery of junkyard art.

"When I was a kid, I saw a jeep with two front ends on it [on display] and thought, 'When I grow up, I'll do the same thing.' So, I did," Dick Schaefer told AOL Weird News. "It started out with a two-faced car, but I still haven't grown up yet."

Schaefer is a retired automotive dismantler who has been turning trash into treasure for as long as he can remember. Most of his sculptures were fashioned from scrap metal he handpicked from his brother's junk yard. Today, many of those same sculptures dot the landscape of his front yard on Hershey Road in Erie.

"I'm not sure how I wound up with as many as I have right now," Schaefer said. "It started out as a little project and kept going. Over the years, I've had to take some down when they rusted out and have replaced them with others. It's ongoing."

The junkyard artist said he enjoys the challenge of making something out of nothing.

"Usually, I will see the junk first, get an idea and look for a way to make it conform," he said.

"Sometimes it will just come to me out of the blue," he continued. "[For instance], I was visiting relatives in Michigan one year and there was a dead bee. I put him on the dashboard of the car and kept studying him all the way from Michigan to Erie, trying to figure out what I could do. The end result is the giant bee you see standing in my yard today that I made out of a cement truck and a car."

Schaefer said he plans to spend this summer repainting the works of art that are featured in his yard right now. Once that's done, he said he'll be onto something else.

"My wife says I get inspired in the fall," he said. "I have a few ideas right now. Sometimes they drive me crazy, but I still enjoy working on them." 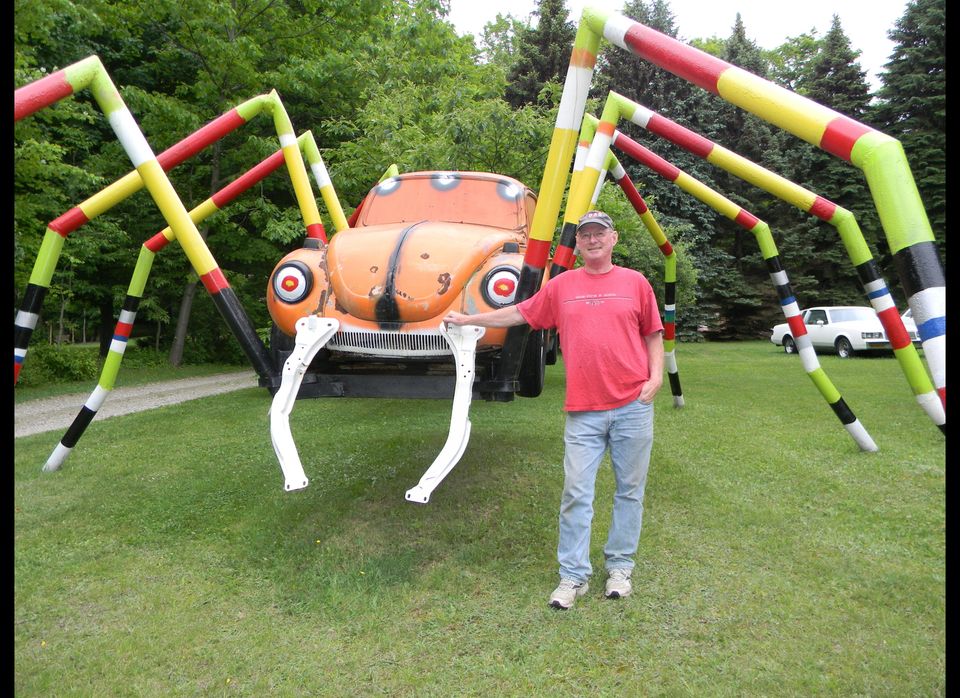 1 / 10
Junkyard Artist Dick Schaefer
Dick Schaefer and one of his many works of art on Hershey Road in Erie, Pa.
David Lohr