The story of an abandoned dog in Brazil and her devotion to her friends is reminding us this week of the goodness you can bring to the world when you share what you have and share it selflessly.

According to this moving video, Lilica the dog was abandoned at a junkyard in São Carlos. Though she was surrounded by poverty and desolation, she found companionship there. Cats, chickens, other dogs and even humans soon became her friends. It wasn’t much, but it was home. 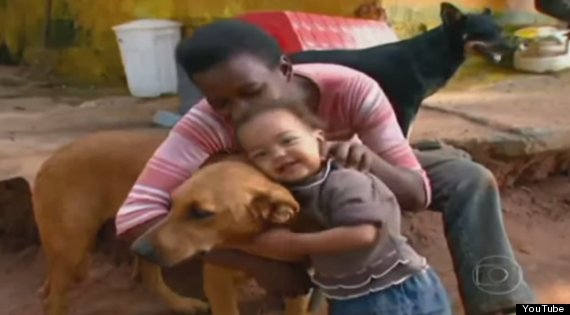 One day, Lilica gave birth to a litter of puppies. With nothing to feed her babies, she started wandering far and wide in search of food for them. These were risky expeditions that involved traveling for miles and crossing roads and highways at night in the pitch darkness; but eventually her wandering led her to Lucia Helena de Souza’s backyard. Their meeting would change everything.

An avid animal lover, de Souza immediately took to Lilica and started feeding her. Every day, Lilica trekked across town to visit de Souza, and she’d devour the food that the Good Samaritan put in plastic bags for her.

Before long, de Souza noticed that Lilica wasn't finishing her food. Instead, the dog was walking off with the bags. Lilica’s behavior baffled de Souza, who eventually decided to follow the pooch -- all the way to the junkyard.

Incredibly, it turned out that Lilica had been carrying the food back with her so she could share it with the other junkyard animals. She'd been saving meals that she could've eaten herself so her friends wouldn't go hungry. 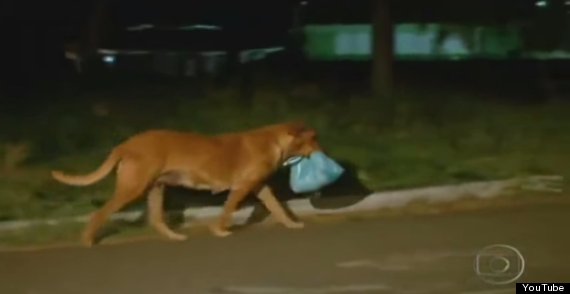 By the time this video was made, Lilica and de Souza had been following the same nightly routine for three whole years. Every night, de Souza would wait for Lilica at an empty lot near her house, bearing a bag of food. Lilica would arrive, having walked for several miles, and after eating her share, she’d wait for de Souza to tie up the bag so she could take the rest home to her friends.

“We human beings, we almost never share things with others. Now for an animal to share with others, it's a … life lesson for us,” Neile Vãnia Antônio, the owner of the junkyard, said of Lilica in the video, per a HuffPost translation.

Lilica has been been making headlines since at least 2012. This particular video, which has gone viral in the past week, was posted on YouTube last year; but it continues to resonate with its beautiful, timeless message.

“Many of us should aspire to be as loving, devoted and loyal as this dog,” wrote one YouTuber Tuesday after watching the clip of Lilica.

“The love of an animal has no boundaries, no conditions and obviously no problem sharing. If only everyone learned from her,” wrote another.

Thanks, Lilica, for teaching us to be better.

Junkyard Dog Walks Miles Every Day To Feed Her Friends, Teaches Us The Power Of Sharing
Heartwarming First Meetings
1 / 9
Baby Penguin Meets Human
A baby Gentoo <a href="https://www.huffpost.com/entry/baby-penguin-meets-human_n_1539886" target="_hplink">penguin met blogger and world traveler Joel Oleson</a> for the first time last May while Oleson visited Antartica. Gentoo penguins are listed as "near threatened" on the IUCN Red List. The captivating meeting went viral as these things tend to do.