It was exciting to be at JPL for the time of orbital insertion (Jupiter Orbital Insertion = JOI) on the evening of July 4, Pacific Daylight Time. There was a festive air even with the guards at the gate as I drove in. I was with the press people in an auditorium and adjacent spaces; the science teams were in a different auditorium.

Our auditorium boasted of a 1/5-scale model of Juno, next to a full-size model of Voyager. 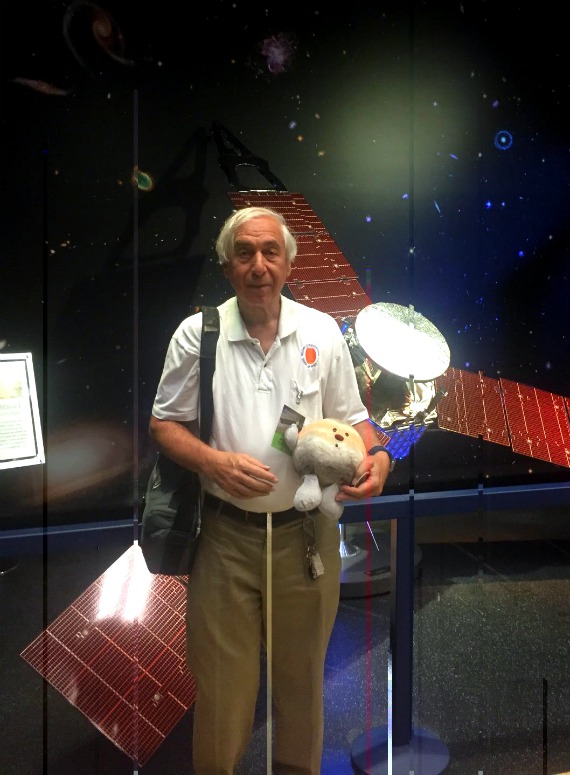 (One of the 134 photos carried on Voyager's golden record is by me, so I paid special attention to the little exhibit on that golden record.) Also by the entrance was a team from Oculus Rift showing a 3-min Virtual Reality (VR) animation of Jupiter (the planet, not the god) and Juno (the spacecraft, not the goddess). With the headset on, I could look behind me to see a huge Jupiter as we passed from pole to pole, and in front of me I could see the spacecraft, eventually seeing through the protective titanium vault to see the individual experiments' electronics.

It has been decades since a spinning spacecraft went to Jupiter, with Pioneers 10 and 11. [I described all these missions in edition after edition of my Astronomy 101 textbook, then Contemporary Astronomy and now The Cosmos]. Decades ago, I described the three-axis stabilization of Voyagers 1 and 2, which enabled them to take better pictures than the crude ones reconstructed from the spinning Pioneers in 1973 and 1974. It remains to be seen how good the images will be from Junocam, which is not one of the science instruments and as I recall was a late addition as people realized that the public would not react well to a camera-less spacecraft. The main observations Juno is to make are of the magnetic field and radiation, hoping to find out more about Jupiter's interior (such as whether it has a dense core, solid or not, perhaps 10 or 20 times Earth's mass), and how and where in the interior the magnetic field is formed.

The NASA TV interviews were very well done, with engineers describing various stages. Though we were at JPL, I note that JPL people must be disappointed that they weren't selected to build the spacecraft, which was made by Lockheed Martin in Boulder, Colorado, with a Principal Investigator from the Southwest Research Institute (SwRI), which also ran last year's New Horizons mission that flew by Pluto (and just this week its continuation to an asteroid was approved by NASA). Juno is part of a relatively low-cost series of spacecraft from NASA (though a billion dollars isn't cheap), not one of the flagship missions like Galileo (to Jupiter) or Cassini (to Saturn) was.

Because the spacecraft was built on the cheap, it didn't have an articulated antenna or instrument section, so the whole spacecraft had to be turned in the proper direction for the main engine to fire, so that Juno could be slowed enough to enter its desired, polar orbit. That also meant that neither high-gain nor medium-gain antenna were pointing at Earth, and only a low-gain non-directional antenna was available to send out signals that we could receive. At Earth, therefore, JPL (through NASA's Deep Space Network's telescopes in Goldstone, California, and in Canberra, Australia) received only "tones," with limited amount of information other than saying "such and such a step has been performed.

At 8:18, such a tone was received to say that main-engine burn had started and at the proper interval, at 8:54 or so, the burn had finished, so Juno should be in its desired polar orbit. (Had the burn ended up to halfway early, it still would have been in Jupiter orbit, though not the most desirable one.) The spacecraft had been spun up from 2 rpm to 5 rpm to provide extra stabilization, and then had to be spun back down and the solar panels reoriented toward the Sun (the spacecraft had been on battery power for the burn).

The passage through Jupiter's radiation field and magnetic field had been thought to be so hazardous that the scientific instruments had all been turned off. They won't be turned on for a couple of days, and then Juno will be far from Jupiter in its very-elongated 53-day elliptical orbit. So we don't even know that the instruments are working, though the electronics were all in a 400-pound titanium box to protect them. The next time Juno comes close to Jupiter will be August 27, so that is when we will get the first desired set of instruments. Someone told me that we would have to wait until then for Junocam pictures, too. (So far, we know that it worked on approach, with a nice set of the Galilean moons orbiting--moons independently discovered by Simon Marius, who wrote down his discovery 1 day after Galileo in January 1610, though Marius may have actually seen the moons first: months earlier. Al Van Helden, an early-telescope scholar now in Utrecht, and I are giving a paper about that at the American Astronomical Society's Division of Planetary Sciences meeting in Pasadena in October, after a set of historical papers I arranged on the history of the New Horizons and other attempted Pluto missions and the discovery and following of Pluto's atmosphere from occultation studies.)

In sum, it was exciting to be at JPL last night, though I am a bit disappointed today that we don't yet have scientific data and may not until the end of August. But I, and the world, can wait!

Astronomer at Williams College and Caltech