Jupiter may have two moons capable of supporting life as we know it.

Like its famous neighbor Europa, the huge Jovian satellite Ganymede might have an ocean of liquid water in contact with a rocky seafloor, a new study reports. This arrangement would make possible all sorts of interesting chemical reactions — including, perhaps, the kind that led to the rise of life on Earth.

Astronomers have known since the 1990s that the 3,275-mile-wide (5,270 kilometers) Ganymede, the largest moon in the solar system, harbors a deep, salty ocean of liquid water beneath its icy shell. But they had thought another layer of ice bounded this global sea on the bottom, ruling out any water-rock interactions. [Ganymede, Jupiter's Largest Moon, Explained (Video)]

The new modeling study, however, suggests that the moon's internal composition is much more complicated, with several layers of ice and water stacked on top of each other, and liquid water perhaps in contact with rock on the bottom.

"Ganymede's ocean might be organized like a Dagwood sandwich," study lead author Steve Vance, of NASA's Jet Propulsion Laboratory (JPL) in Pasadena, Calif., said in a statement, referring to the many-layered sandwiches regularly eaten by Dagwood Bumstead, a character in the long-running comic strip "Blondie."

"This is good news for Ganymede," Vance added. "Its ocean is huge, with enormous pressures, so it was thought that dense ice had to form at the bottom of the ocean. When we added salts to our models, we came up with liquids dense enough to sink to the seafloor." 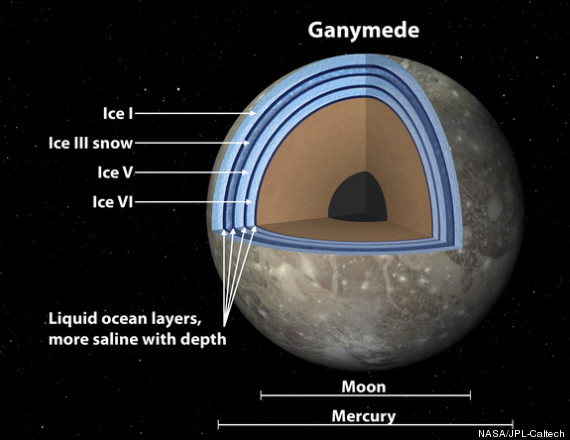 Labeled version of an artist's concept of Jupiter's moon Ganymede, the largest satellite in the solar system, illustrating the "club sandwich" model of its interior oceans.

Vance and his team performed lab experiments that showed how much salt increases the density of water inside bodies such as Ganymede — an effect that previous modeling work hadn't fully appreciated.

The model developed by Vance and his colleagues also takes into account the different types of water-ice that occur at different pressures. Inside Ganymede, for example, ice crystals should be greatly condensed, creating a form of ice that's heavier than water and thus sinks to the bottom.

"It's like finding a better arrangement of shoes in your luggage — the ice molecules become packed together more tightly," Vance said.

The team's model suggests that Ganymede's interior contains an ocean separated by as many as three ice layers, with a rocky seafloor underlying everything. But the researchers can't say for certain that this model is an accurate representation of reality.

"We don't know how long the Dagwood-sandwich structure would exist," said co-author Christophe Sotin, also of JPL. "This structure represents a stable state, but various factors could mean the moon doesn't reach this stable state."

Scientists think that Ganymede and four other moons in the solar system possess oceans of liquid water beneath their frigid surfaces. The others are the Jovian moons Callisto and Europa and the Saturn satellites Titan and Enceladus. Scientists think the oceans of Europa and Enceladus are in contact with rock, making these two moons high-priority targets for astrobiology missions in the future.

Indeed, the European Space Agency plans to launch a mission called JUICE (JUpiter ICy moons Explorer) in the early 2020s to study Europa, Callisto and Ganymede. And NASA officials have said they want to send a relatively low-cost (less than $1 billion) probe toward Europa by 2025 or so.

The new study appears in the journal Planetary and Space Science.