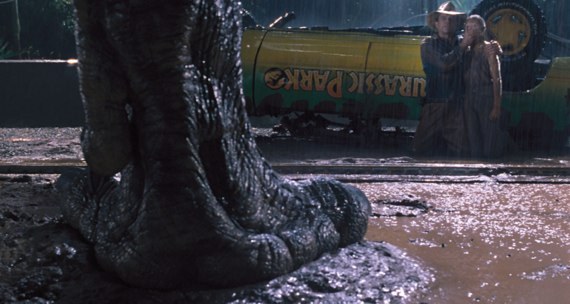 On Tuesday night, I attended an advanced screening of Jurassic Park 3D in IMAX near Times Square in New York City, which is set for release in theaters on April 5. Sure, I had seen parts of Steven Spielberg's Jurassic Park here and there over the last 20 years, but, for whatever reason, I have not sat down and watched Jurassic Park from start to finish since it was originally in theaters. Anyway! To mark this occasion, I kept a live diary as I watched Jurassic Park in 3D.

6:03 p.m. I can honestly say that I have not seen the first few minutes of Jurassic Park in 20 years. I faintly remember this Jurassic Park employee being killed.

6:05 p.m. I definitely don't remember Miguel Sandoval being in this movie. Also, Miguel Sandoval apparently does not age. He looks exactly like the guy who wanted to make tequila with Vinnie Chase.

6:08 p.m. I can only assume that Sam Neill's Dr. Alan Grant couldn't get away with accosting a child with a Velociraptor claw in 2013. I feel this would make the news.

6:14 p.m. There are a smattering of chuckles from the audience as Wayne Knight appears on the screen.

6:19 p.m. I forgot how much I enjoy Jeff Goldblum in this movie. Also, remember when Jeff Goldblum was an action star? In the span of four years he did Jurassic Park, Independence Day and The Lost World.

6:20 p.m. For whatever may have been lost over the last 20 years as far as the visual effects of the dinosaurs are concerned (which is a lot less than I would have guessed), the "big reveal" still caused a chill down my spine based on the swell of the score alone.

6:25 p.m. I had also completely forgotten about the "Mr. DNA" presentation.

6:26 p.m. I love how it's slipped into the Mr. DNA presentation, "and what was missing from the dinosaur DNA, we just replaced with frog DNA." In a, "we're sure that will all work out," kind of way.

6:34 p.m. I had forgotten how great the ethics debate is between Goldblum's Dr. Ian Malcolm and Richard Attenborough's John Hammond.

6:40 p.m. Not only was the 1992 Ford Explorer used for the Jurassic Park tour vehicles, it was also owned by at least 70 percent of the adults who lived in the suburb of Kansas City where I went to high school.

6:44 p.m. The audience erupts in laughter at the excitement level of Hammond's granddaughter, Lex, after she discovers that the Ford Explorer has an "interactive CD-ROM."

6:45 p.m. Yes, we get it, it's funny to laugh at the oh-so-stupid people from 1993 who thought CD-ROMs were high tech. Enjoy using your Vine app on your iPhone 5s, because in 20 years from now, you're going to be Lex.

6:46 p.m. Actually, Alan Grant has a kerchief, too. Nevermind, I suppose the point is that there are a lot of kerchiefs in this movie that I don't remember.

6:50 p.m. I can hear that strange laugh pass through the audience as they all, slowly, start to recognize Samuel L. Jackson. You know, not the "I saw something funny" laugh, but the "oh, I forgot there was a famous person who wasn't that famous at the time in this movie" laugh.

6:58 p.m. I feel that Dr. Ian Malcolm, with his all-black attire, is inappropriately dressed for his surroundings.

7:12 p.m. Yep, when the T. Rex breaks through the side window of the kids' Ford Explorer, I literally jumped out of my seat. (I should add, the sound effects are really loud in this theater.)

7:16 p.m. Other than darting off and abandoning the kids, Gennaro didn't seem like that bad of a guy. Certainly not so bad that he deserved to be eaten by the T. Rex while sitting on a toilet. I can only assume that Spielberg was having some trouble with a lawyer at the time.

7:35 p.m. Lex just referred to herself as a "hacker." I feel that term, in general, meant something completely different in 1993. At least I doubt a 13-year-old girl is interested in breaking into cell phones for nude photos of Zach Braff, or whoever.

7:38 p.m. There are a smattering of chuckles from the audience as Jeff Goldblum appears on the screen shirtless. To be fair, his character is injured, but the way he is sprawled out does make it appear that he is attempting some sort of seduction.

7:42 p.m. I'll be honest, I still have trouble watching the "Wayne Knight gets sprayed in the face with dinosaur acid" scene.

7:50 p.m. Ellie just announced, "we're back in business," in reference to the power being restored. Right after, a Velociraptor bursts through the wall behind her. This time I didn't just jump out of my seat, I made some sort of pathetic sound, too.

7:57 p.m. Even being well-aware of the scene in which the Velociraptor jumps up at Ellie, the 3D added an added jolt of terror I wasn't expecting. My pen actually flew out of my hand.

8:00 p.m. Yes, this is why I don't watch this movie. I scare very easily and this movie is absolutely terrifying.

8:03 p.m. How can there be two sequels to this movie? Why would anyone ever come back to this place or any place like it?

8:05 p.m. I'll be honest, watching Jurassic Park again in a theater -- specifically, blown up on an IMAX screen -- was a wonderful experience. But it might be another 20 years before I watch this again. Good grief, that movie is terrifying.