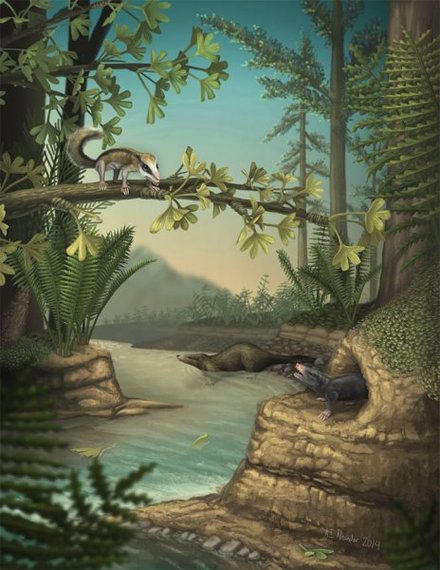 New fossil evidence, published by Oxford University in Current Biology, demonstrates the surprising speed with which mammals evolved during the ancient Jurassic period. Small mammals, such as the now extinct docodonts (pictured above), saw an explosion in skeletal and dental adaptations, specifically specialized molars that give the animal its name.

The age of the dinosaurs is referred to as the Mesozoic Era and is subdivided into three major periods: the Triassic, Jurassic, and the Cretaceous. Mammalian fossils have been found alongside dinosaurs in the early Jurassic but only recently has the complexity and speed of their evolution been realized, particularly in the mid to late Jurassic.

Once thought to simply be small, elusive, nocturnal insectivores, the latest fossil findings from China and South America have shown a wide development of feeding, gliding, and digging adaptations in these early mammals.

To understand the cause of this surge in evolutionary process, Oxford University researchers conducted the first large-scale analysis of skeletal and dental changes of all Mesozoic animals. This massive calculation revealed the evolutionary rates across the entire Mesozoic epoch, allowing researchers to see the rapid burst of evolutionary development in the late Jurassic (200 -145 millions years ago).

"What our study suggests is that mammal 'experimentation' with different body-plans and tooth types peaked in the mid-Jurassic," lead author Dr Roger Close of Oxford's Department of Earth Sciences stated. "This period of radical change produced characteristic body shapes that remained recognizable for tens of millions of years."

The research team catalogued a number of notable changes in mammalian skeletons and jaw structure, tracking the lineage every million years. During the mid-Jurassic the rate of these adaptive traits raised to 8 changes per million years on each lineage- almost ten times that seen before or after.

The branch that saw the most diverse growth was in therian mammals, the ancestral group of placental mammals and marsupials. This group was evolving 13 times faster than average during the mid-Jurassic period and slowed to a rate lower than average by the end but still maintained an increase in the overall number of species.

"We don't know what instigated this evolutionary burst. It could be due to environmental change, or perhaps mammals had acquired a 'critical mass' of 'key innovations' -- such as live birth, hot bloodedness, and fur -- that enabled them to thrive in different habitats and diversify ecologically," Close stated. "Once high ecological diversity had evolved, the pace of innovation slowed."