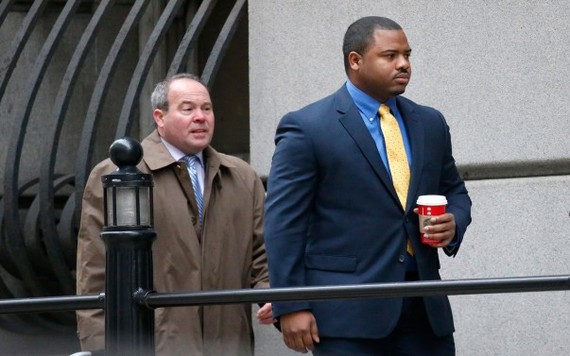 Amid demonstrations, calls for calm and a city closely watching, the process of picking an impartial jury in the trial of Officer William Porter is now underway. The 26-year-old, who has been on Baltimore's police force since 2012, is charged with manslaughter, second degree assault, misconduct, and reckless endangerment in the death of Freddie Gray. On Monday, along with his defense, he got to see the potential pool of 75 Baltimore City residents who could sit and hear his case. Only 12 will actually sit on the jury and there will be a limited number of alternates. All of them were referred to by number (keeping with the judge's instructions on keeping jurors anonymous).

The science for selecting a jury is limited to a few individuals according to law professor Doug Colbert of the University of Maryland. To assist in getting the outcome you want lawyers who employ jury consultants, he says. Their selection boils down to several qualities, "track record, can you get the jury you're looking for, and issues in the case." It's a cottage industry at best known to prosecutors and defense attorneys. The key is winning your case. Neither side is allowed to talk about whether they have employed a consultant in this case but rest assured they have an ideal juror in mind.

There are more women in the pool than men, and the average age of the pool appears to be 30 or older. "It wasn't 50-50 but, more African-Americans" similar to make-up of the city, said Tesa Hill-Aston, the President of the Baltimore Branch of the NAACP, who sat in as an observer to the proceedings.
From a racial perspective, there are 60 African American jurors, of that number 20 are Black women, there were one to two members of other ethnic minorities (Latino, South Asian), but there were no Asians in the pool.

Judge Barry Williams used a polling method to discern if there were problems with serving. He asked a series of questions about issues which may rule out a juror, including whether or not they had knowledge of Gray's case and the curfew that followed the unrest in Baltimore; and also if they knew of the $6.4 million civil settlement between the Gray family and the city. Everyone in the pool knew of both.
A question which caused a pause related to crime: "Have you or any of your immediate family members ever been a victim of crime, been investigated for a crime, or have a pending criminal case?" At least 37 potentials jurors stood, a little more than half of the assembled. Hill-Aston said the fact so many stood up means "it's too much crime...it's sad."

Deciphering who should sit on this case will come down to a number of issues. It's likely to challenge conventional wisdom according to Professor Colbert, "normally a defense has an ideal juror in mind and so does the prosecution, but flip that idea in this case." The legal scholar says things like race, geography, profession, and neighborhood will come into play.

While this was playing out in the courtroom, outside protesters converged to make it known their displeasure. Chants could be heard even in the fourth floor courtroom this morning. A similar protest schedule for Monday afternoon went unheard because the judge and attorney were behind closed doors questioning jurors individually. Hill-Alston said she does not want "violence attached to this case...let the process work. We can't go back to the status quo."

Judge Williams has an ambitious goal he wants to get the Porter trial started this week and have it wrapped up by Dec. 17.