On the night of Nov. 20, 2001, a conversation held over Instant Messenger changed our lives forever. Our 12-year-old son messaged me in my office from the computer in his bedroom.

Ryan says: can i tell u something

Mom says: Yes I am listening

Ryan says: well i don't know how to say this really but, well......, i can't keep lying to you about myself. I have been hiding this for too long and i sorta have to tell u now. By now u probably have an idea of what i am about to say.
Ryan says: I am gay
Ryan says: i can't believe i just told you

Mom says: Are you joking?

Ryan says: no
Ryan says: i thought you would understand because of uncle don

Mom says: of course I would
Mom says: but what makes you think you are?

Mom says: but that doesn't make you gay...

Ryan says: it's just the way i am and it's something i know
Ryan says: u r not a lesbian and u know that. it is the same thing

Mom says: what do you mean?

Mom says: I love you no matter what

Mom says: what about what God thinks about acting on these desires?

Mom says: thank you for telling me

Ryan says: and i am very confused about that right now

Mom says: I love you more for being honest

We were completely shocked. Not that we didn't know and love gay people; my only brother had come out to us several years before, and we adored him. But Ryan? He was unafraid of anything, tough as nails and all boy. We had not seen this coming, and the emotion that overwhelmed us, kept us awake at night and, sadly, influenced all our reactions over the next six years was fear.

We said all the things that we thought loving Christian parents who believed the Bible, the Word of God, should say:

We love you. We will always love you. And this is hard. Really hard. But we know what God says about this, so you are going to have to make some really difficult choices.

We love you. We couldn't love you more. But there are other men who have faced this same struggle, and God has worked in them to change their desires. We'll get you their books; you can listen to their testimonies. And we will trust God with this.

We love you. We are so glad you are our son. But you are young, and your sexual orientation is still developing. The feelings you've had for other guys don't make you gay. So please don't tell anyone that you are gay. You don't know who you are yet. Your identity is not that you are gay; it is that you are a child of God.

We thought we understood the magnitude of the sacrifice that we -- and God -- were asking for. And this sacrifice, we knew, would lead to an abundant life, perfect peace and eternal rewards. Ryan had always felt intensely drawn to spiritual things; He desired to please God above all else. So, for the first six years, he tried to choose Jesus. Like so many others before him, he pleaded with God to help him be attracted to girls. He memorized Scripture, met with his youth pastor weekly, enthusiastically participated in all the church youth group events and Bible Studies and got baptized. He read all the books that claimed to know where his gay feelings came from, dove into counseling to further discover the whys of his unwanted attraction to other guys, worked through painful conflict resolution with my husband and me and built strong friendships with other guys -- straight guys -- just like the reparative therapy experts advised. He even came out to his entire youth group, giving his testimony of how God had rescued him from the traps of the enemy, and sharing, by memory, verse after verse that God had used to draw Ryan to Him.

But nothing changed. God didn't answer his prayer, or ours, though we were all believing with faith that the God of the Universe, the God for whom nothing is impossible, could easily make Ryan straight. But He did not.

Though our hearts may have been good (we truly thought what we were doing was loving), we did not even give Ryan a chance to wrestle with God, to figure out what he believed God was telling him through scripture about his sexuality. We had believed firmly in giving each of our four children the space to question Christianity, to decide for themselves if they wanted to follow Jesus, to truly own their own faith. But we were too afraid to give Ryan that room when it came to his sexuality, for fear that he'd make the wrong choice.

Basically, we told our son that he had to choose between Jesus and his sexuality. We forced him to make a choice between God and being a sexual person. Choosing God, practically, meant living a lifetime condemned to being alone. He would never have the chance to fall in love, have his first kiss, hold hands, share intimacy and companionship or experience romance.

And so, just before his 18th birthday, Ryan, depressed, suicidal, disillusioned and convinced that he would never be able to be loved by God, made a new choice. He decided to throw out his Bible and his faith at the same time and try searching for what he desperately wanted -- peace -- another way. And the way he chose to try first was drugs.

Suddenly our fear of Ryan someday having a boyfriend (a possibility that honestly terrified me) seemed trivial in contrast to our fear of Ryan's death, especially in light of his recent rejection of Christianity and his mounting anger at God.

By the time our son called us, after 18 long months of silence, God had completely changed our perspective. Because Ryan had done some pretty terrible things while using drugs, the first thing he asked me was this:

Do you think you can ever forgive me? (I told him of course, he was already forgiven. He had always been forgiven.)

Do you think you could ever love me again? (I told him that we had never stopped loving him, not for one second. We loved him then more than we had ever loved him.)

Do you think you could ever love me with a boyfriend? (Crying, I told him that we could love him with 15 boyfriends. We just wanted him back in our lives. We just wanted to have a relationship with him again... and with his boyfriend.)

And a new journey was begun, one of healing, restoration, open communication and grace. Lots of grace. And God was present every step of the way, leading and guiding us, gently reminding us simply to love our son and leave the rest up to Him.

Over the next 10 months, we learned to truly love our son. Period. No buts. No conditions. Just because he breathes. We learned to love whomever our son loved. And it was easy. What I had been so afraid of became a blessing. The journey wasn't without mistakes, but we had grace for each other, and the language of apology and forgiveness became a natural part of our relationship. As our son pursued recovery from drug and alcohol addiction, we pursued him. God taught us how to love him, to rejoice over him, to be proud of the man he was becoming. We were all healing, and most importantly, Ryan began to think that if we could forgive him and love him, then maybe God could, too.

And then Ryan made the classic mistake of a recovering addict: He got back together with his old friends, his using friends. And one evening that was supposed to simply be a night at the movies turned out to be the first time he had shot up in 10 months -- and the last time. Ryan died on July 16, 2009. And we lost the ability to love our gay son, because we no longer had a gay son. What we had wished for, prayed for, hoped for -- that we would not have a gay son -- came true. But not at all in the way we had envisioned.

Now, when I think back on the fear that governed all my reactions during those first six years after Ryan told us he was gay, I cringe as I realize how foolish I was. I was afraid of all the wrong things. And I grieve, not only for my oldest son, whom I will miss every day for the rest of my life, but for the mistakes I made. I grieve for what could have been, had we been walking by faith instead of by fear. Now, whenever Rob and I join our gay friends for an evening, I think about how much I would love to be visiting with Ryan and his partner over dinner. But instead, we visit Ryan's gravestone. We celebrate anniversaries: the would-have-been birthdays and the unforgettable day of his death. We wear orange, his color. We hoard memories: pictures, clothing he wore, handwritten notes, lists of things he loved, tokens of his passions, recollections of the funny songs he invented, his Curious George and baseball blankey, anything, really, that reminds us of our beautiful boy, for that is all we have left, and there will be no new memories. We rejoice in our adult children, and in our growing family as they marry, but we ache for the one of our "gang of four" who is missing. We mark life by the days B.C. (before coma) and A.D. (after death), because we are different people now; our life was irrevocably changed in a million ways by his death. We treasure friendships with others who "get it" because they, too, have lost a child.

We weep. We seek Heaven for grace and mercy and redemption as we try not to get better but to be better. And we pray that God can somehow use our story to help other parents learn to truly love their children. Just because they breathe. 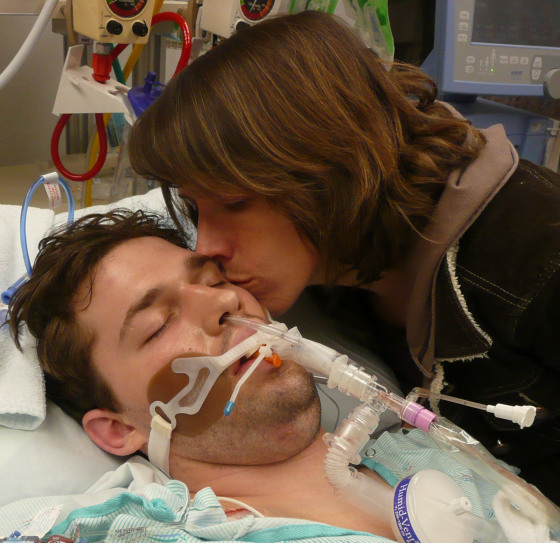 On June 20, 2013, at the invitation of Alan Chambers, my husband Rob and I shared an extended, unedited version of our story at the final Exodus International conference in Irvine, Calif.:

In the presentation, Rob read a letter that he'd recently written to Ryan, which you can read here. We also shared a slideshow of photos of Ryan through the years:

This piece, which was originally written for Biola Queer Underground in December 2012, was posted on Facebook on Jan. 14, 2013, which would have been Ryan's 24th birthday.
It is now posted, along with other blog posts, at JustBecauseHeBreathes.com.