During a recent stay in Bures-sur-Yvette, France, I was struck by the fact that many of the front and back yards looked the same as those in Southern California. I hadn't expected this. France is known for being a bastion of regional character, but globalization is happening to gardens even in France. And just like the United States, France is paying a huge price in loss of its own natural beauty, biodiversity and numbers of birds, butterflies and other pollinators.

What does this globalization look like? As I walked from the train station in Bures to the house where I was staying, I noticed Mexican feather grass outside a pastry shop, California wild lilac next to a café, and hedges of Asian bamboo. The sweet smell of hot croissants was drifting from the bakery... people were joking with one another as they waited in line at the butcher shop, the rumble of conversation distinctly skeptical and deeply humane... diminutive cars were speeding past the stone church and the World War One memorial flanked by old artillery casings: All this said "France". The plants said "nowhere in particular." 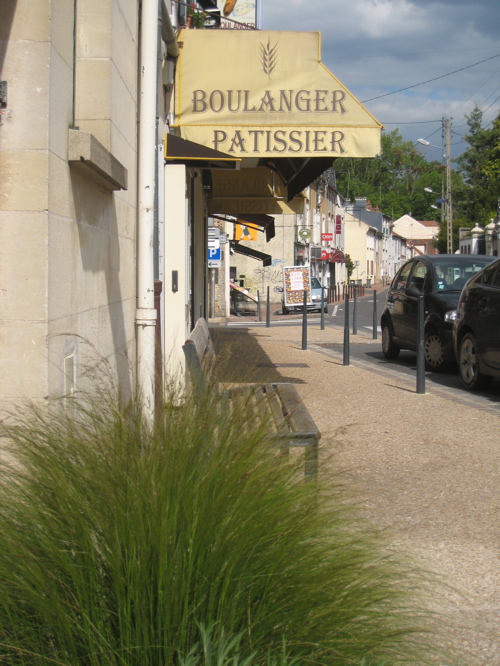 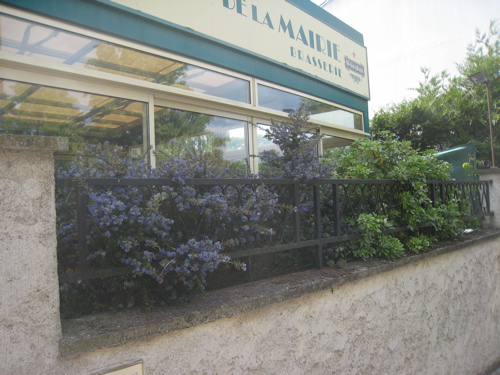 Go to a Home Depot or Lowe's in Southern California, then a Botanic or Jardiland in France, companies with extensive market presence, and you will find them selling many of the same plants from all over the world: Hydrangea, Lantana, Nerium oleander, Photinia, Pittosporum...

What's so bad about this globalization? The plants are pretty and can grow in the regions where they're being sold, so what's the fuss?

The fuss is that 96 percent of birds feed insects to their young and 90 percent of all insect species that eat leaves can eat ONLY native plants.

The fuss is that people need birds and pollinators for our well-being.

Birds and pollinators are essentials, not luxuries. Birds provide natural pest control, watershed protection and reforestation services. Without birds, we would lose 17 different ecosystem services whose worth is estimated between $16-54 trillion per year worldwide.Without insect pollinators, we would have to resort to human pollinators using feathers and cigarette butts attached to sticks, as is now being done to apple trees in China. Imagine the living-wage price of one of those apples!

Through our non-native globalized gardens and unenlightened farming practices, we are, as Richard Gregory of the Pan-European Bird Monitoring Scheme says, "sleepwalking into a disaster."

Sleepwalking is too kind. I will be more blunt: Worldwide, we are committing ecocide through our globalized gardens, due in no small part to the highly successful distribution systems of large companies selling mostly non-native plants. And to remedy this ecocide, here's what we should do: Apart from the edibles we plant in our gardens to feed ourselves, we should plant primarily what is native to our region.

In the United States and France, urban and suburban gardens are overwhelmingly landscaped with non-native plants. These gardens give an impression of beauty, but they are helping to drive birds and butterflies and countless other creatures into extinction.

I visited a Botanic store near Dijon, France. The displays of garden furniture and bird baths were lovely, but I could find only seven types of plants native to France. The vast majority of the hundreds of other species being sold were from other parts of the world - Nandina from Asia, Ceanothus from North America, Pennisetum from Africa, Bougainvillea from South America... And in an ironic twist, a display sign stated that the store was supporting biodiversity by making a large variety of flowering plants available. (Plant species richness is increased through non-native plants, but insect and animal species richness plummets.) 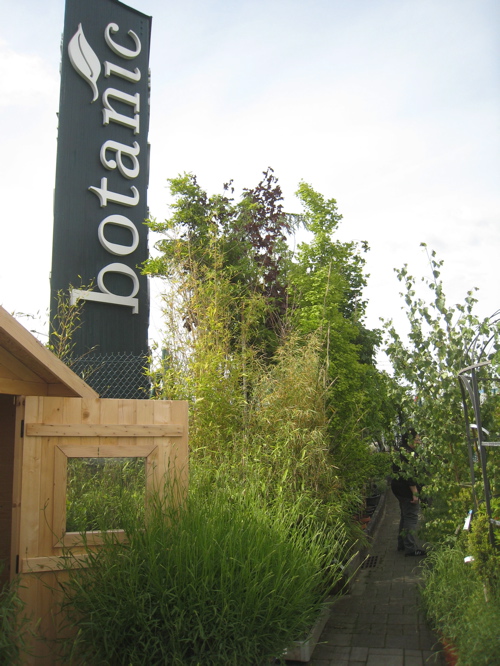 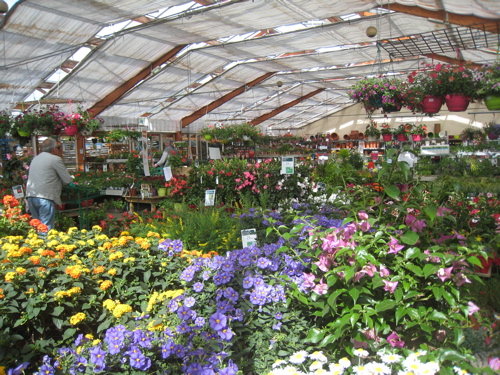 This is self-inflicted damage, and the results are not so different from Mao Zedong's campaign in China in the 1950's to wipe out the Eurasian Tree Sparrow. Mao commanded people to eradicate the sparrows by shooting them, destroying their nests, etc., because it was estimated that each sparrow ate about 10 pounds of grain each year and that 60,000 people could be fed for every million sparrows killed. So, nationwide, hundreds of millions of sparrows were killed and the sparrow became virtually extinct in China. Then crop yields sharply declined from damage by locusts and other insects because the sparrows weren't there to eat them. An estimated 30 million people in China died of starvation.

How is killing birds by shooting them or destroying their nests different from killing them because we do not plant the natives that produce the caterpillars the birds need for their young? The intent is different, but the result is the same. And through all forms of ecocide, we ultimately hurt ourselves.

When I returned to California, I visited a Home Depot in Glendale. In the nursery, I was delighted to see a "Smart Planet" sign advertising plants that would, among other things, conserve water and create a habitat for native wildlife. I looked at the plants on the long table beneath the sign: The plants were native to Australia, New Zealand, South Africa and the Mediterranean, but there weren't any from California - one of the richest places for plant biodiversity on Earth.

Given that the current extinction rate is 1000 times the normal background rate, how can we justify continuing this aspect of globalization?

Logically, there's no justification, but gardens aren't about logic - they're about love. So here's what to do if you seriously love your non-natives: Keep those non-natives whose color, scent or foliage strikes some deep cord within you and, apart from the space reserved for your edibles, plant the rest of your garden with natives.

For many years, my mother felt that native plants wouldn't look right in her garden in Orange County, California. Having constructed a lush non-native landscape to remind her of her Pennsylvania childhood, my mother resisted incorporating even one California native. But then she encountered a Matilija poppy and her resistance evaporated. 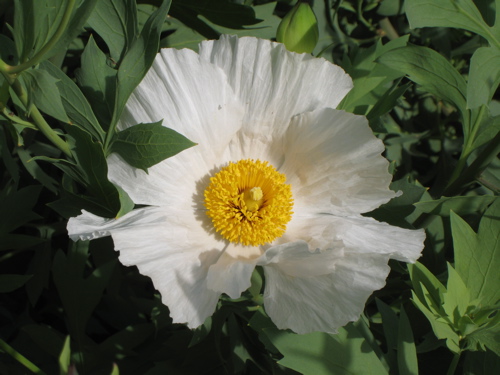 Now, among my mother's resolutely non-native hot pink azaleas, there is native Verbena lilacina 'De la Mina', Penstemon 'Margarita BOP' and Ceanothus 'Ray Hartman'. My mother delights in the Gulf Fritillary butterflies that sip nectar from their flowers and lay eggs on the leaves of her non-hybridized passion vine. Gold finches feed the caterpillars to their young and feast on the seeds produced by the Verbena. More and more, my mother's garden feeds her soul because it feeds many.

Worldwide, this is the kind of shift we need to make. Small changes in many yards would make a big impact.

Companies like Botanic and Home Depot could make a significant contribution to the health of the planet by consistently selling the native plants of the region and educating the public about why they are important and how to care for them. Education is key. Across the world, companies need to consult the native plant specialists of each region and partner with them. Big companies have economic muscle and wide distribution systems, and native plant specialists have the knowledge and plant material that should be predominant in every nursery. This partnership needs to happen if we are to have a planet with more than just scattered remnants of the incredible variety of species that Nature has given us.

Historic gardens with plants from all over the world arose from a desire for sophistication and scientific advancement. The Jardin des Plantes in Paris, founded in 1626, is a stellar example of one that has furthered world knowledge of plant diversity. In this day and age, however, given the environmental challenges we face, we do not need millions of home gardens with international plant palettes helping to drive insect and animal species into extinction. We should be sophisticated enough to use our scientific knowledge to plant native gardens at home.

Beautiful examples of native and edible gardens in France and California may be found at Bringing Back the Natives, the Theodore Payne Native Plant Garden Tour, Les Jardins de Barbirey and Rancho Santa Ana Botanic Garden.

Gardening is a worldwide activity. We should use it to create places that are alive with the ecological substance of regional beauty, particularly since scientists estimate that, by 2050, the world's urban areas will triple in size. Imagine the birds, butterflies and other beneficial creatures we could support if influential companies sold a good selection of plants native to each region and if each of us nurtured even just a few natives in our yards or patio containers. The French cherish their food, wine and language, deeply aware of their essential connection to history and the land that is France, yet even the French have compromised the individuality of their local garden ecosystems. It is imperative that we all become aware of this worldwide problem and go to the next step by cherishing the native plants of our own particular land and the life those plants make possible. It is crucial to the quality of our lives, the richness of our environment and the heritage of the next generation. I already know too many children who have never seen a real ladybug. How soon before our children see birds and butterflies only in books? 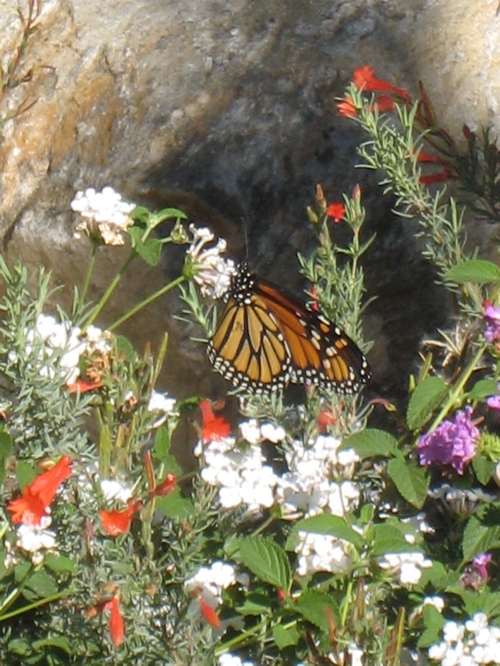