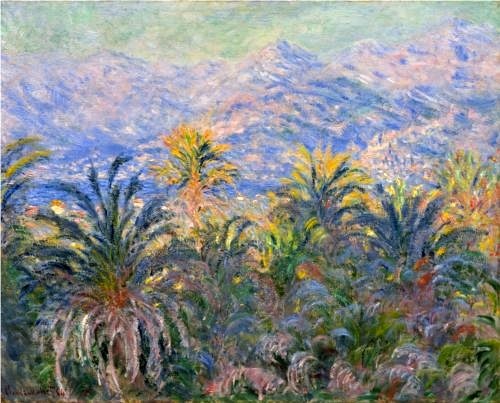 The French painter Claude Monet spent one winter -- the early part of 1884 -- in the Italian town of Bordighera, having been introduced to this part of the Riviera by his friend Renoir the year before. Monet was 43 at the time, already an accomplished artist with some "signature" paintings under his belt, but by no means the international superstar of his later years and still working to evolve his "mature" style. His financial affairs, too, were largely unsettled -- he had already moved to Giverny, but only as a tenant, and would still have to work hard for another five years before he had the funds to buy the house for himself and his large patchwork family.

Most of the townscapes and landscapes that provided the motives for the great impressionist painters can be easily identified in today's modern world, and although this is generally true for Monet's works as well (Saint Lazare train station, Rouen Cathedral), it is not the case for Bordighera. This is mainly due to two reasons.

Firstly, Monet appeared to be less interested in the specifics of Bordighera and more in a Platonic ideal of "the south" -- intense sunlight, lush vegetation, exotic plants. (For Monet - a child of the North, born in Paris and raised in Normandy -- the experience of this "other world" was an important step towards the development of his mature style: his Bordighera paintings appear to have more in common with his famous later works -- Rouen Cathedral, the Giverny gardens -- than with anything that he had painted up to that date.)

And secondly, because Monet's painterly interests focused on the gardens of Francesco Moreno, and these gardens -- internationally famous during Monet's time -- no longer exist. Moreno was a rich citrus fruit merchant, and when he lost all his money -- briefly after Monet's visit, as it happens -- the land was used to build an entire new town of shops and residential homes. Nearly all of modern Bordighera except for the Old Town was built on what was once Moreno's land.

To retrace Monet's steps, walk straight from Bordighera train station into Corso Italia -- crossing Via Vittorio Emmanuelle II -- until you reach Via Romana, already flanked by many sumptuous villas in Monet's time (although it was just a dirt road then). The road has preserved much of its ancient grandeur and tranquility. 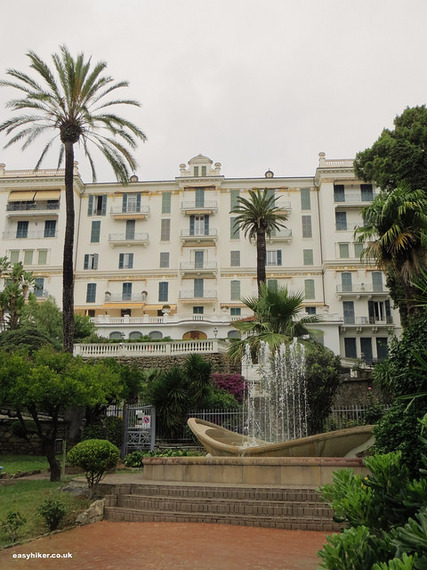 ... and some of the buildings -- including the Villa Etelinda, formerly Villa Bischoffsheim -- actually feature in Monet's paintings. 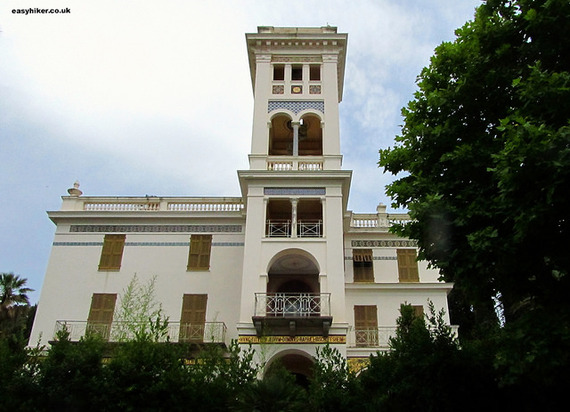 If you walk on Via Romana toward the Old Town, the Moreno gardens would have started on the land to your right (between the street and the Mediterranean coast line). The municipal administration has erected a sign (and a reproduction) to mark one of the few relatively unchanged Monet motives. 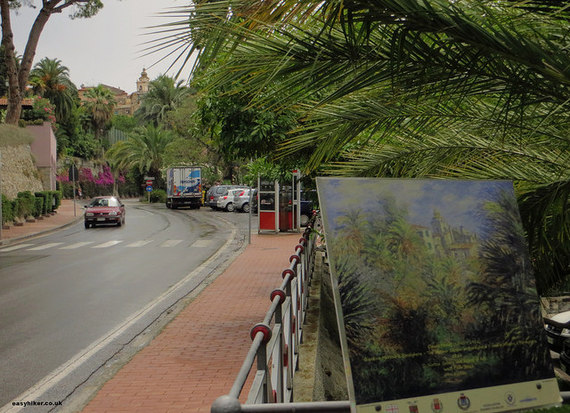 A little further on your right you will pass Villa Palmizi (on 5 Via Romana), a school in whose back garden there are still some buildings from the old Moreno villa where Monet was a frequent guest.

Climb up the stairway on your left into the Old Town ... 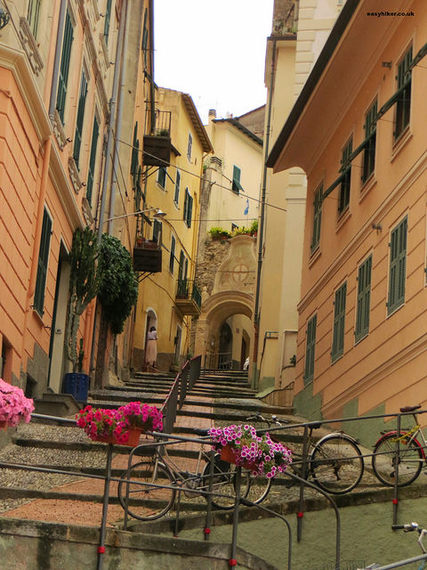 ... which rarely features in the paintings as such and is generally only used by Monet to provide a background for his Mediterranean landscapes. Still, it is well worth a look ... 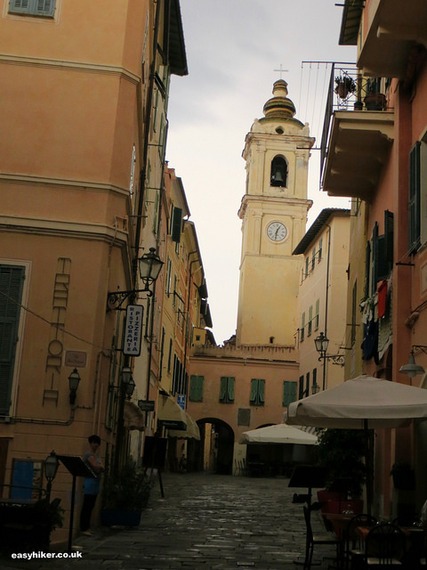 ... not least because it leads you to the Sentiere del Beodo, where Monet habitually began his search for Mediterranean motives on out-of-town excursions into the Sasso valley and to the eponymous hilltop village. 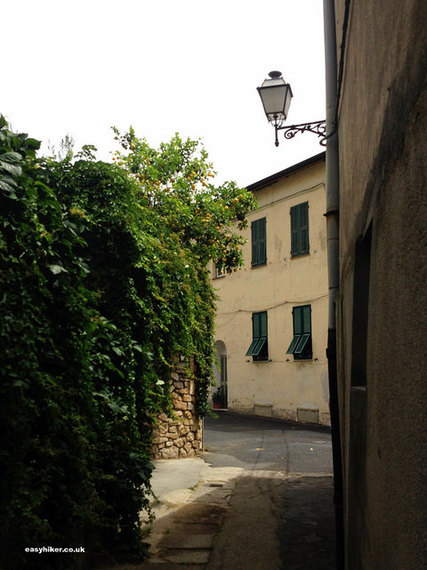 Turn around when you think you have seen enough of the Sentiere and walk back to town by taking a left turn into Via dei Colli and another, even sharper left into Via Garnier where, on no. 11, you can find the Villa Garnier ... 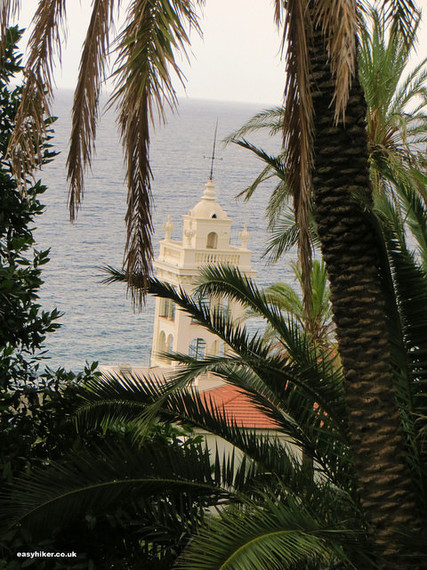 ... which is featured in more Monet-at-Bordighera paintings than any other building in town, even though you may not recognize it since all you ever see on the canvas is a wall here and a column there. 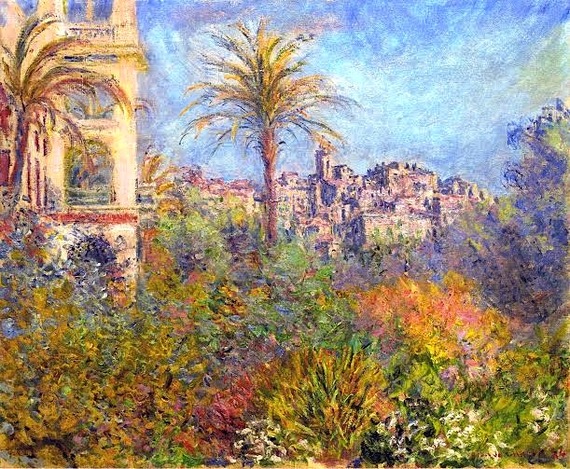 The villa is named after its owner and architect Charles Garnier, the builder of the Paris Opera and the casino at Monte Carlo. He was an artist in his own right -- perhaps a lesser one than Monet, but one who left a far deeper mark on the city (many of Bordighera's buildings are his, including the City Hall and the Church of the Immaculate Conception, which you will find on Via Vittorio Emmanuelle II on your way back to the station), and one who did not spend a mere three months here but most of his life, long enough, tragically, to bury his two beloved sons in the local cemetery. There would be much more physical evidence in Bordighera to construct a Garnier walk, that's for sure.

But if you have a bigger artist fish to fry, the motto is simple: just follow the Monet. This has proved sound advice before, after all, so why shouldn't it work for you?

Want to read more about the Italian Riviera? Head to All Things Riviera