The "Ground Zero Mosque" that we have been and will be hearing so much about is not exactly a mosque, nor is it at Ground Zero. Here's why: you can't see Ground Zero -- the former site of the World Trade Center -- from the future site of the Cordoba House. 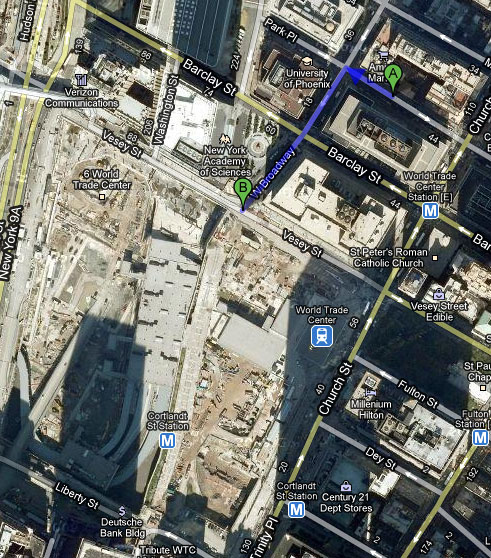 From 45 Park Place, the former Burlington Coat Factory building that will make way for the Cordoba House, it's two blocks, around a corner, to get to the WTC site. Park Place doesn't lie between the construction site and any mass transit stations, so you would need to go out of your way to have it offend you.

If you look up the walking directions you'll notice that it takes a couple of minutes to walk the distance (approximately a tenth of a mile) between the two spots. Pretty much two minutes exactly when I took the trip with a shaky video camera. Here's the clip, first sped up to 4X speed then slowed down to 1X:

When the new World Trade Center rises, you'll be able to see it from 45 Park Place, because it'll be by far the tallest thing around. The planned Cordoba House will be dwarfed. It certainly won't overlook or overshadow Ground Zero.

Why is the distance between the two sites so important? Simple accuracy, for one. It's frustrating to see so many commentators blithely disregard an obvious, physical problem with the "mosque at Ground Zero" formulation: it's not at Ground Zero.

There's that "at." For a two-letter word, it packs quite a wallop. It has been tossed around in a manner both cavalier and disingenuous, with an intention by some to inflame passions. Nobody, regardless of political leanings, would tolerate a mosque at ground zero. "Near" is not the same, as anyone who paid attention back in the fourth grade should know.

I understand the journalist's impulse to use the "Ground Zero Mosque" shorthand to instantly remind readers why they should care about the story. Headlines leave out qualifiers like "near" all the time for brevity's sake. But in this case the elision is critical; leaving out the "near" clearly takes sides -- against the "mosque" and against accuracy.

In addition, the building planned for 45 Park Place is a cultural center with a prayer room -- not a single-purpose house of worship for Muslims, which is probably what we should reserve the word "mosque" for. As Haberman also explains, "That it may even be called a mosque is debatable. It is designed as a multi-use complex with a space set aside for prayer -- no minarets, no muezzin calls to prayer blaring onto Park Place."

The 92nd Street Y, on which the Cordoba House is explicitly modeled, has a whole host of Jewish events take place inside of it, but no one calls it a synagogue. There's no good reason why Cordoba House should be misleadingly called a "mosque." I've been guilty of using this word too, in conversation and in writing, but it's inaccurate. Muslims already read the Quran and pray at 45 Park Place, but that does not and will not turn it into a "mosque."

There's one more catch for the opponents of the so-called Ground Zero mosque: by the same logical leap you can call the Cordoba Center a "mosque," you can also call Ground Zero as it already exists a giant, open-air mosque. Muslim prayers are already taking place right on the edge of the construction site, and not for world domination. Families are going there to pray -- for the souls of the dozens of innocent Muslim victims who died on September 11.