This morning, I woke up in bed, alone, my legs twisted up in the slate gray comforter. The windows were wide open, shades down, and the bedroom was cool and dark. I remembered at once, tomorrow is the day. Tomorrow I will be divorced, officially.

It had been more than a full year that I have been living alone with my children. More than one year since I wrestled off my wedding ring. The air in my room, the room that was mine, only, now, smelled of old wood and wet lawn. I let my mind settle on the thought again.

Tomorrow. I will have a new-old name and no husband. No sickness or health, no richer or poorer. I hadn't had it all this past year, really... and yet. It was going to be written down now, like an epic poem on sheepskin vellum...permanent. Like the last chapter of a book I somehow hadn't found the courage or the time or the words to write.

An ending. For the first time in 34 years I would not be only somebody's daughter or somebody's wife.

Who exactly was I supposed to be? If I hadn't finished the last chapter, how can I begin a new story?

And then just before 8 am, my daughter Annabella came running into the house, screaming unintelligible words and panting. And when I slipped on my shoes and ran to the backyard, her little brothers followed close behind.

She led me toward the bird's nest that we had found a few days before. We had moved from where we found it in our basketball hoop to a safe tree in the backyard.

The baby bird that had been living in it, the one we had watched grow, just four days new, was dead. He was nestled in between the folds of the trunk and a stump of branch. His beak was parted, his new downy feathers matted against the chicken skin of his neck. His eyes were blind blue marbles in his head. They were closed; they had never even opened. He had fallen out of the nest.

"We should call the vet." my son Gabriel says helpfully from behind me.

I hurried them all back in the house. Then I held Annabella. I wasn't sure what to say. But she knew.

"His mother disappeared." She is shaking her head, sadly. "He didn't have a chance anyway."

The weight of this hit me hard. It seemed like an essential fact to her. That loving something fragile meant that sometimes, inevitably, unexpectedly it was going to be lost. This was a truth to her, jagged and plain.

And the knowledge that she had made peace with this concept made the weight of it all seem even heavier to me.

But I didn't show it. What good would it do?

I just drove the children to school and went to the supermarket.

I bought a cup of coffee and drank it while it was very hot and burned my lips and throat.

Then I came into the house and put the groceries away and stood with empty hands, in the empty hall. The windows were all still open and my neighbor was mowing his lawn already. Already?

And then, as though it was the next thing on the list of things I needed to do today, I just began to cry.

I cried for a long time. I gathered my skirt in my hands and sat down on the painted white steps in my hall.

I knotted my fingers in my hair. I did not think why has this happened to me or wish that things were different. What good would it do? The marriage was done and I was glad it was done. And I was glad I had it too, grateful for the gifts it had given me.

I just cried, simply, pointedly, for the all the things I had lost. My marriage, my husband, our family. My twenties. So much time.

I cried for the dead baby bird strangled in the tree.

I cried with hopefulness, for what was building in me and for what would come next.

With joy, for the way that somehow, in spite of losing and learning, I had been teaching my children--my daughter--about resiliency. And strength, in times of change. I cried with sudden understanding. For myself.

And for my daughter, who understood so very wisely, that sometimes when you love, you might lose--but that you owed it to something or someone to just go on and love anyway. 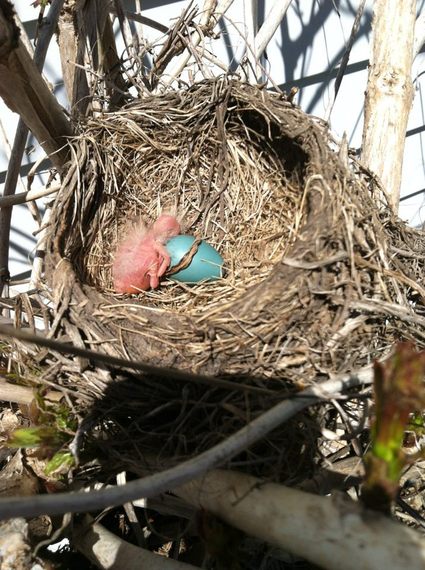