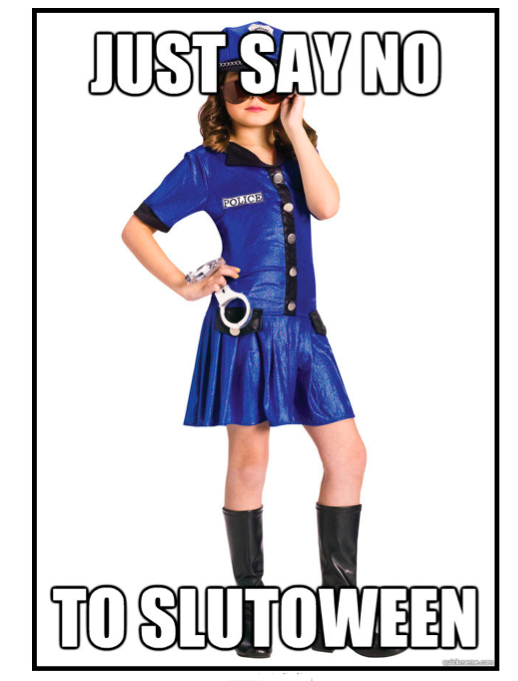 The other day as we were driving to soccer practice I turned the radio on for the kids. I usually listen to NPR or 102.7, but this time I switched around the dial until the kids begged me to stop on a Katy Perry song, "Last Friday Night." The kids didn't know what they were singing about, but I did. Katy sang her way through the upbeat song talking about how she was "blacked out" and then "had a menage a trois." Wait, what? Katy, a threesome? Is this what we're talking about in popular music right now? And exactly why do my kids like this song so much?

I'm fairly laid back. I know there are things out there that I want to protect my kids from, and I know that is all going to go out the window once they are in school (already evident with Finn being in first grade), and I'm a firm believer that educating them about these things rather than pretending they don't exist is the best way to go. But, how to explain what a menage a trois is to a 5-year-old? Of course I just told them that it was a "grown up thing" that I would explain to them at an unspecified later date, but still. THIS is what we have to listen to? Come on.

Let's start out with a few truths. THIS is who I want my daughter to be when she grows up: 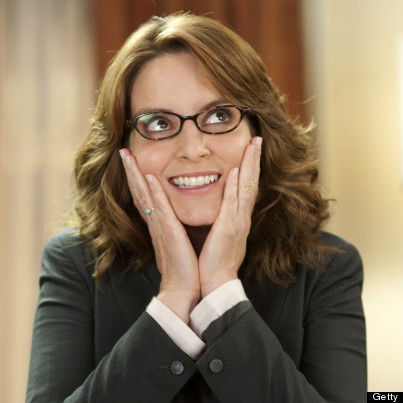 THIS is who my (4-year-old) daughter wants to be when she grows up: 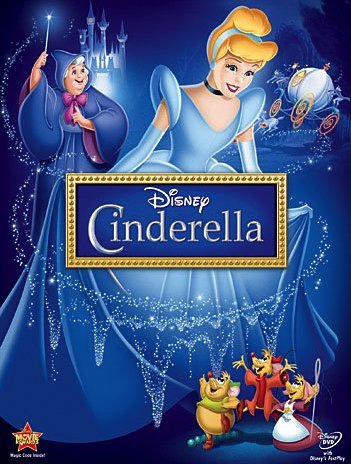 Me: Levy, who do you want to be when you grow up?

Levy: Cinderella, because she gets to go to the ball with the knight and wear pretty shoes.

Levy: Because princesses have nice lipstick, and pretty colored dresses.

Me: Do you think princesses have special powers like superheros?

Levy: No, they're just girls. And some of them have babies.

After I explained to Levy that having babies IS a superpower (she disagreed with me) it got me thinking. The funny part about Levy's princess obsession is that when we started out, there were no princesses in this house. None. I didn't have anything against princesses per se, I watched all those movies growing up and I had Barbies galore, but I just didn't want to introduce it myself. I wanted to see what she gravitated to. I was sort of a tomboy I guess, I wore my brothers' hand-me-down polo shirts, played soccer and rode bikes with the boys. I wasn't a "girlie girl" growing up, so I wanted to let Lev develop her own likes. If she liked pink and sparkles, fine, but it would be because she chose it. And then came preschool and Lev went into FULL PRINCESS MODE. She saw them, she wanted them, she loved them. I had a girlie girl. A nail polish wanting, Hello Kitty obsessed, princess loving girlie girl.

Which is fine, sort of. I don't want to take that stuff away from her. The princess costumes she wants aren't overtly sexual, they are all actually pretty age appropriate. And she's enough of a tomboy to satisfy me, she can be just as rough and tumble as Finn is (if not more sometimes). But, is it just step one onto that whole path? Is this "Sexy Lite"? Finn likes his superheroes because they are "strong" and they "help people" and "fight bad guys." What did Cinderella do? Not a whole hell of a lot. She went to a party with a guy. And don't get me started on Brave, Disney's feeble attempt at a non-princessy princess. The way Disney failed at giving us this new girl power non-princess is that, hey, guess what? She's still a princess. And what is she battling against? Arranged marriage? Okay then. Let's move on.

So here I am, looking for Halloween costumes for Lev. She initially wanted to be Hello Kitty. So off I go Googling Hello Kitty costumes. And I found this... 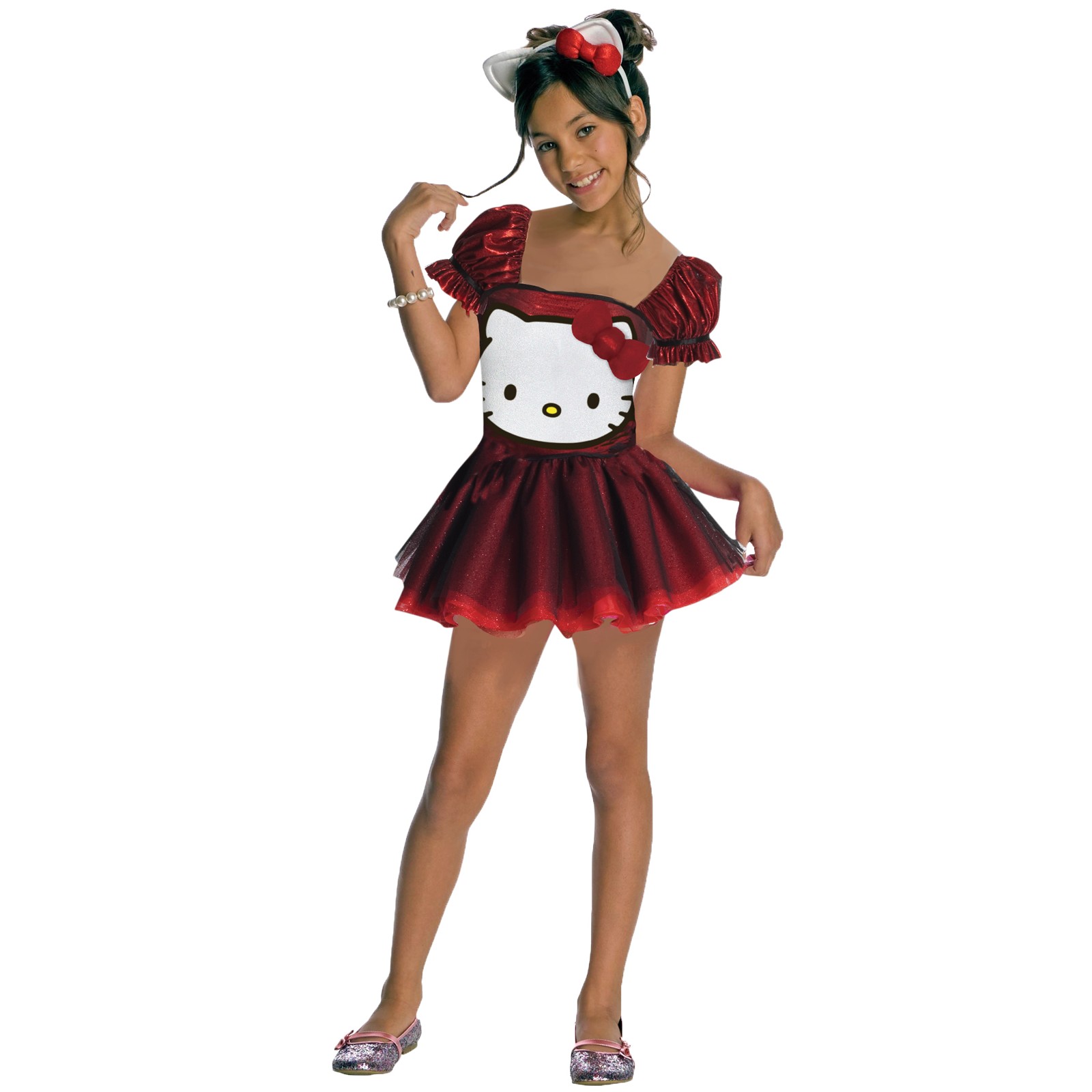 This comes in a "small," which is the size (according to their size chart) for a 3-4-year-old. THREE YEARS OLD. And that pose? What is with that pose with the head tilted, the hair twirl? WHAT IS WITH THAT?! But wait. I also found this... 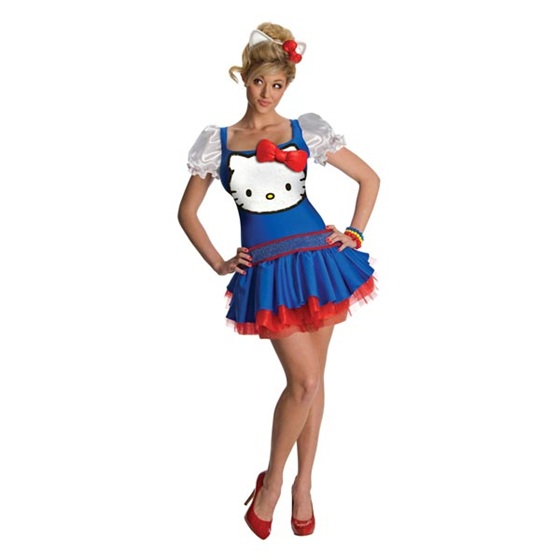 This is a costume for an adult. Now, tell me the difference between the two? Besides the fact that THIS one is listed as "Women's Sexy Blue Classic Hello Kitty Costume." This one is "sexy," the child's costume isn't then? This was disturbing to say the least. Of course she was over my shoulder the whole time going "That one! That one! I want that costume!" to which I immediately snapped my laptop closed and shuddered for a moment, unsure of what exactly I was just looking at. For a 4-year-old girl.

After I put the kids to bed I started looking for some tips on how to prevent my daughter from having a "sexualized childhood" to perhaps ease the parenting anxiety bomb that had just exploded in my brain. The first tip I found was:

Know the media your child is seeing so you can have real conversations together about it and make informed decisions about what limits to set that you can explain and discuss with your child.

This was a perfect one. So, no more Googling Halloween costumes while she looks on. Great. But more than that -- set limits. Nowadays kids are WAY more mature at 4 and 5 than I was at that age. They want to watch High School Musical and listen to Kesha (or is it Ke$ha?). But it is of course up to ME, as a parent, to say no f-ing WAY are you listening to Ke$ha right now. Sample lyrics from a Ke$ha masterpiece:

The other tip I found helpful was this one:

Work at all levels to create a society that is more supportive of children's healthy gender and sexual development. This includes promoting public policies that reduce the sexualization of children and limiting the power of corporations to market sex to children.

Easy right? Just work at all levels! But this tip resonated with me too:

Reduce gender stereotypes. Help daughters (and sons) develop a broad range of interests, skills and behaviors that get beyond the narrow focus on appearance that the sexualized childhood provides.


This gets me into the whole idea that when people have a son no one asks them anything like "Oh bet you can't wait till he has a girlfriend!" and laughs. No. It's only when you have a daughter that people bring up them dating. AS BABIES. Why the need to ask a new dad if he's worried about his baby dating? "Oh I bet you're going to greet their new boyfriends at the door with a shotgun." I have heard this said. Many times. I have heard about how it is the DAUGHTERS that need to be sent to a convent school, that can't date until they are 25, that they need to be locked away for fear they will do something, or have something done TO them. The idea of their daughters having a sexual relationship in the future is considered a nightmare for parents (fathers especially) but that isn't the same for boys. But instead of hiding away from it, or hiding them away, let's educate all of them, girls AND boys.

Furthermore, I'm trying lately to change my own way of presenting things to Levy, who is just soaking up every last bit of influence like a giant sponge right now. Instead of convincing her to let me put her hair in a ponytail for soccer because it "will look pretty" I am telling her I'm doing it because it will keep it out of her face, so she can run faster. I'm hoping playing sports will help her learn that being strong and healthy is what is important about her body, more important than just how it looks. But don't get me wrong, I don't think protecting my daughter means never talking about sex or never telling her she's pretty. I just don't want to make being pretty or beautiful the only thing that is praise-worthy. It's okay for her to date when she's older. It's okay to be pretty AND smart.

But, all that being said, it's a work in progress. My daughter is still going as Tangled for Halloween. When she asked (aka BEGGED) to be Tangled I said yes, mainly because I couldn't come up with a reason to say no, or an alternative she wanted more. I think ultimately it will turn out to be a balancing act between letting her try some things, steering her in the right direction, helping her and her brothers make appropriate choices. It won't be easy, especially with slutty fur trimmed cat costumes marketed towards kindergartners. It comes down to us, as parents, to help navigate this path. It just sucks that this path is littered with wildly inappropriate influences that are shamefully marketed at kids way too young to process them, but maybe if we don't buy them, they'll go away. It's sad that the role models our girls really should be looking up to don't make the news as much as Kim Kardashian does, but maybe if we stop watching, they'll stop talking about her. As much as the outside world is to blame, we are too if we don't help our girls (and boys) make the right choices. Empower yourself, as a parent, and you just might be surprised by how much it empowers your child.

Jenny Witte is the creator of Mamatoga.com and Mamatoga Magazine, where this post originally appeared.

In 2012, HuffPost Parents looked at the evolution of girls' costumes from silly to "sexy." Flip through the slides and read more about what we found.


Halloween Costumes: Then And Now
More:
Halloween Parentsslutty-halloween-costumesHalloween 2013Halloween Costumes
Newsletter Sign Up
Raise the kind of person you'd like to know
Subscribe to our parenting newsletter.
Successfully Subscribed!
Realness delivered to your inbox

Owner and Founder of Mamatoga and Mini City