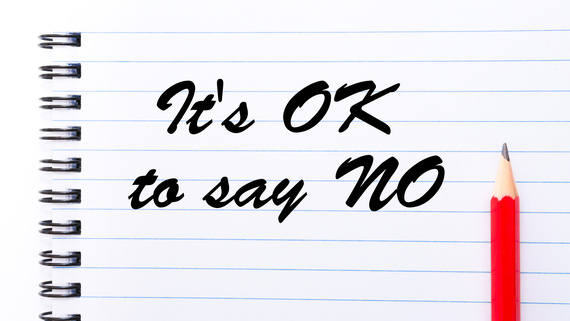 Recently I was reminded of an important life lesson. One I'm sure not everyone has mastered but we all should. It's the lesson of knowing it's ok to just say no and how to say it. A favor was asked of me; however I knew my response would be no. Sharing the situation with my best friend I asked, "How do I say it?" She immediately responded back and said, "Just say NO!" followed with a mischievous lol!

Although I thought her response was funny, she was right. The answer was "No". So instead of over thinking what to say or delaying the inevitable, I simply responded "No"-- but politely. I paused and wondered why, like most people, did I feel I had to pad a response or think of a gingerly way to handle the situation? Often times we consider:

These are valid questions; however this situation taught me a lesson that I will continue to practice. Just as I learned this week, I also want you to practice,

Here's a quick example of how we often respond:

"No, I won't be able to join you this time because work has been super busy, I work late and I have to be up really early in the morning. But thanks for thinking of me!" The truth being we really didn't want to go at all.

Instead we should say:

"No, I won't be able to join you this time. Thanks for thinking of me."


I get it -- it is not easy to just say no. However it is necessary and wise knowing when to do so. The answer won't always be no but the yeses should be thoughtfully and carefully given. Prioritize yourself and start practicing saying no and focus on the things that matters most. Remember it is less about not being there for others but more about being there for YOU!

About the Author
Melissa J. Nixon is a captivating keynote speaker, trainer, executive leadership coach, and courageous life strategist. She specializes in growing, developing and inspiring leaders and influencers to maximize their career, business and life potential. Melissa is also a contributing writer for the Huffington Post, LifeHack, Addicted 2 Success, and the Network of Executive Women. www.courageouslifeacademy.com