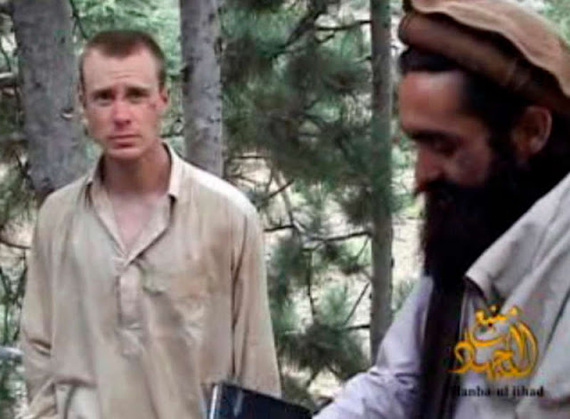 Long before Sgt. Bowe Bergdahl could ever have put his fellow soldiers in danger, certain people advocated policies that would put millions of American soldiers in harm's way. Decades before the POW was released for "hardcore" terrorists, there were individuals who spoke their mind and didn't hide behind hyperbole. Therefore, a short history lesson is needed before evaluating Bowe Bergdahl's role in possibly keeping us less safe. This lesson revolves around semantics; specifically the meaning of words and how they're used to communicate our true thoughts.

In 1998, William Kristol and Robert Kagan wrote an opinion article in the New York Times stating, "Saddam Hussein must go... the only way to achieve that goal is to remove Mr. Hussein and his regime from power. Any policy short of that will fail." As one can see, they were very direct in their viewpoint that President Clinton should invade Iraq.

Moving along to 2001, Kristol and Kagan clearly expressed their thoughts about the Afghanistan war in a Weekly Standard article entitled, Winning Strategy:

WITH THE TALIBAN DISLODGED and Osama bin Laden increasingly shorn of allies, the endgame seems to be in sight in Afghanistan...

The president deserves special credit for passing one of the key tests of any commander in chief: He knew when to drop a failing strategy and try something different...

Can we draw the proper lessons from that victory? Surely one is that an aggressive strategy aiming at rapid victory is almost always preferable to a dilatory strategy that delays victory...

President Bush may turn out to be better at running a war than some of the old pros around him.

Sadly for the U.S., "the endgame" was nowhere in sight. After over a decade of wars and drones, the GOP is now afraid of five previously unknown terrorists (traded for Bergdahl's release). Also, the "rapid victory" they referred to wasn't so rapid, and most Americans don't even know if we've succeeded in our goals.

Furthermore, during Bush's tenure, conservatives like Kristol and Kagan (and the entire Republican establishment) never ceased to sing the praises of military action. In a 2004 article entitled, The Right War for The Right Reasons, they explain that even though weapons of mass destruction weren't found, we still made the right decision to invade Iraq:

Was it right to go to war?

We are paying a real price in blood and treasure in Iraq. But we believe that it is already clear--as clear as such things get in the real world -- that the price of the liberation of Iraq has been worth it.

These words were written by influential men in 2004, a decade before Sgt. Bergdahl allegedly deserted his post and supposedly caused our country great harm.

Indeed, as Kristol and Kagan correctly stated, we paid a price in 2004 and continue to do so. From then until today, 4,486 U.S. soldiers have died in Iraq and 2,323 U.S. soldiers have died in Afghanistan according to iCasualty.org. In addition, 32,223 Americans have been wounded; entailing everything from amputees to other combat related conditions like traumatic brain injuries (in addition to PTSD). These figures don't even begin to touch the emotional and psychological scars of families who lost loved ones and veterans who battle night terrors and PTSD.

Fast forward to 2014 and apparently one POW could have put the entire country at risk, or at least that's what the GOP is saying. Rep. Mike Rogers recently claimed that negotiating to release Bergdahl was "dangerous." According to Ted Cruz, we paid a "dangerous price" and asked, "How many soldiers lost their lives to capture those five Taliban terrorists that we just released?

Well, how many lives were put at risk from William Kristol and everyone else advocating wars that 53 percent of Americans feel were a mistake? You mean to tell me one possible deserter is worthy of scorn, but the colossal mistakes advocated by influential pundits should never be correlated to American deaths? Also, Mr. Cruz is a bit ambiguous. Is he suggesting we should have left Bowe Bergdahl with the Taliban forever?

Finally, William Kristol -- the anti-Nostradamus --stated that, "It's one thing to trade terrorists for a real POW, for someone who's taken on the battlefield and fighting honorably for our country...It's another thing to trade away five high-ranking terrorists for someone who walked away." This quote in particular-more than anything stated by Ted Cruz, Mike Rogers, or any other conservative against the Bergdahl release-highlights the point that GOP lawmakers aren't expressing their true thoughts.

When it comes to starting wars, conservatives don't mince words. They say what they mean. When it comes to advocating policies that sent 2.5 million American soldiers into harm's way, then the people who pushed for these decisions are never correlated with the death of Americans. But when discussing the freedom of an American POW who allegedly deserted his post, then the conservative message is unclear. It wasn't wise, they say, since it could lead to terrorist attacks, and he might not have deserved being saved in the first place. However, with all the posturing and focus on the negatives, they're not articulating an underlying message:

"Sgt. Bergdhal Should Have Died In Taliban Captivity."

Sadly, conservatives won't be as straightforward with Bergdahl's release as they were with calling Iraq "worth it" or deeming "rapid victory" in Afghanistan. They'll use the logic of William Kristol: "it is one thing" for a courageous soldier, but another thing for a deserter. They'll use words like "dangerous price" and "hardcore terrorists." They won't however, say what they mean, because what they mean is despicable. They know that even if Bergdahl deserted his post, he was still an American soldier; the same person they worked so hard to send into battle. You either save him from the Taliban, or he dies in captivity. That's the zero-sum that the GOP has tried desperately to evade with recent statements.

They'll never say that he should have perished as a POW, but that's what their doublespeak would equal in words.