I am not like any drag queen you have ever met.

First of all, from my experience at Pride festivals both large and small, I have yet to see anyone with my level of flamboyance. I've been told I can be seen by everyone from Ray Charles to Russians on the International Space Station. (Not that their government would let them admit it.)

But I also make this statement of uniqueness based on actual data. When I came out as bisexual, I was a heterosexually married father of one, working as a high school teacher in a small town. I figure there's not too many people who share that resume. More, I can prove it.

For the moment, let's ignore that bisexual thing. Although just for a moment. (Having spent 44 years in the closet I have a lot of time to make up for.) Let's look at all those other numbers.

I know there are 9.6 million married families with one child, or about 16 percent of families. Next, there are 1.4 million high school teachers in the United States. (As 42 percent of children in America are in that age range, I'm assuming 42 percent of the teachers are, too.)

So, that means there are about 224,000 of me if you assume 16 percent of high school teachers have one child. (Is this an approximation? Yes, but given that teachers actually work with kids all day, it's amazing that how many teachers choose to actually have a kid at home.) Throw in that only 19 percent of the country lives in a rural area, and there are now only 42,500 of me.

Which now brings me back to that bisexual thing.

Trying to pin down just how many bisexuals are in the country is quite difficult. Mainly because none of us will stay still long enough get pinned down. Too many bad childhood memories of being stabbed by fellow blind and dizzy children playing "Pin the Tail on the Donkey." (Which somehow still seems less life altering than "Smear the Queer.")

Nevertheless, according to the most recent data I could find, about .4 percent of men identify themselves as bisexual. Now what that actually means we'll talk about some other time. But if that number is accurate, the number of me just dropped to 170.
Now, is 170 technically unique? No, but consider this: You are eight times more likely to be killed by a falling asteroid than to grow up to be me: (1 in 250,000) than you are to grow up to be like me. Or, to put it another way, if you ever find yourself pregnant, you are four times more likely to give birth to identical triplets than someone like myself. 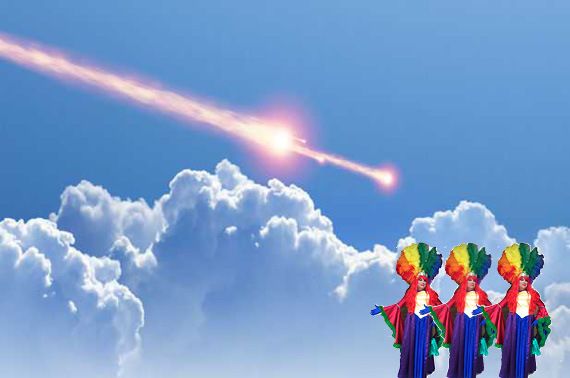 Now, throw in the fact that I used to be a performer for Disney on Ice and a mascot for an SEC university. And I've also been an award-winning journalist as well as a nationwide best-selling author. At this point, you're more likely to run into a Norwegian African-American named Lopez than someone like me. (OK, I have no statistics to back that up. But I'm pretty sure.)

I tell you all this not to impress. But simply to point out that I really do have a unique perspective on things. I see things differently, and I try to bring that to everything I do.

It's also why when I tell you something you should know I'm not making it up. That's the reason for all the hyperlinks. They're so you can verify what I've said, or read further about the topic if you're interested. There's so much ignorance in the world about LGBT issues, that I don't want to add to it. If I write it down, you should be able to know I didn't just pull it out from betwixt my butt cheeks.

Having said that, if you ever think my numbers or wrong, or just my ideas, let me know. I claim to be neither perfect nor a statistician. More, if you have questions, ask them: I'd love to find answers. That's the whole point of my writing: To teach and to learn. (Starting with make-up tips. Anyone know how to keep that stuff from melting during a summer pride festival?)

See ya' next week.