Part I: What DOJ and the Bureau of Prisons Have Planned

Reversing a 20-year policy, Deputy Attorney General Sally Yates announced the Department of Justice will phase out federal use of private prisons, saying they "compare poorly" in safety and effectiveness to federal correctional facilities run by the Bureau of Prisons (BOP). This column will detail the Justice announcement; next week, I'll take a look at what led up to it, and its possible impacts.

Private contracting began in 1997, responding to overcrowding at federally-run prisons. The IG report noted that in December 2015, when the federal inmate population was 20% larger than the rated capacity of all federal prisons, 14 contract prisons held about 22,660 federal inmates, or roughly 12% of BOP's total population of about 195,000. About 40,000 federal inmates were detained in private prisons in 2014, according to the Bureau of Justice Statistics. 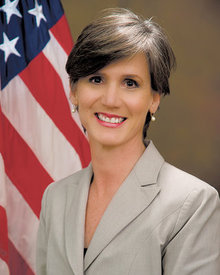 The three for-profit prison companies contracting for federal inmates are the Nashville-based Corrections Corporation of America; the Boca Raton-based GEO Group, Inc.; and Centerville, Utah-based Management and Training Corporation. The DOJ announcement drove down sharply the shares of the first two firms, both publicly-traded.

The August 18 announcement, which the ACLU's National Prison Project director termed "groundbreaking," came in a memo from Yates, which referenced a DOJ Inspector General's report issued a week earlier, Review of the Federal Bureau of Prisons' Monitoring of Contract Prisons. The IG report claimed private prisons have poorer records on security and inmate safety than federally-run facilities, and ought to be monitored more thoroughly by BOP.

The Yates memo maintained private prisons had "served an important role" following the nearly fourfold increase since 1980 in the number of federal inmates, but became less needed as federal prison populations began to decline. Rather than immediately cancel contracts with private prisons, Yates added, DOJ would either not renew expiring contracts (as all are due to over the next five years) or scale back the number of inmates sent to privately-owned facilities.

The three for-profit prison companies contracting for federal inmates are the Nashville-based Corrections Corporation of America; the Boca Raton-based GEO Group, Inc.; and Centerville, Utah-based Management and Training Corporation. The DOJ announcement drove down sharply the shares prices of the first two companies, both publicly-traded.

Critics of private prisons note many of their contracts require government payments based on guaranteed occupancy levels as high as 90% or 100% of capacity, regardless of actual population figures. But one private prison analyst, skeptical BOP can assimilate the influx of transfers, called DOJ's plan "aspirational, rather than attainable.

Christopher Zoukis is the author of College for Convicts: The Case for Higher Education in American Prisons (McFarland & Co., 2014) and Prison Education Guide (Prison Legal News Publishing, 2016). He can be found online atChristopherZoukis.com, PrisonEducation.com and PrisonLawBlog.com