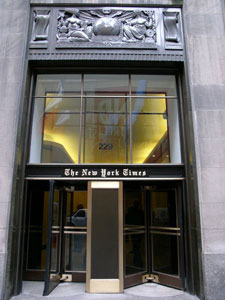 But the evidence against the two people asked to plead guilty was scant, according to other federal investigators involved in the case, and the guilty pleas were sought as a last ditch effort by the Justice Department to avoid having to compel testimony from the Times against its own sources.

Unable to obtain guilty pleas, the federal prosecutor in charge of the leak case has now informally recommended that the Justice Department move forward to compel testimony from the Times. He has argued that it will be difficult to bring criminal charges without such testimony.

As a result, one of the first major decisions likely to be made by Attorney General-designate Michael Mukasey, if confirmed by the Senate, will be whether to subpoena reporters for the Times to testify.

Some investigators in the leak case say they believe there was pressure to obtain guilty pleas despite the paucity of evidence to deflect attention away from charges that Gonzales gave false or misleading testimony to Congress about the eavesdropping program, as well as broader questions about the legality of the program.

The Justice Department's Inspector General, Glenn A. Fine, is currently investigating whether Gonzales testified truthfully to the Senate Judiciary Committee regarding the surveillance program.

Earlier, the Justice Department's Office of Professional Responsibility had attempted to investigate whether Gonzales and other government attorneys acted within the law in authorizing and overseeing the eavesdropping program. But President Bush personally intervened in the spring of 2006 to shut down that investigation by preventing OPR investigators from being granted the necessary security clearances.

The same federal investigators involved in the case were also concerned that the investigation might be considered compromised or politicized because Gonzales continued to oversee the leak investigation even though some of those under scrutiny were potential witnesses against Gonzales in separate Justice Department inquiries.

"It sure would have changed the subject if there was a guilty plea," said one senior government official. "The story line changes goes from an Attorney General under fire who is alleged to have lied to Congress to 'our national security and ability of the government to protect us against Al Qaeda was seriously compromised by people acting criminally.'"

During his Senate confirmation hearing on Wednesday, Mukasey pledged that if confirmed, politics would no longer intrude into decisions regarding any prosecutorial decisions. "Partisan politics play no part in either the bringing of charges of the timing of charges," he said.

In the past, administration officials have argued that reporters should testify against sources who provide them with what they believe to be sensitive national security information.

In Feb. 2006, then-CIA Director Porter Goss testified to Congress about what he asserted were improper leaks from his agency to the press: "I've called in the FBI, the Department of Justice. It is my aim and it is my hope that we will witness a grand jury investigation with reporters present, being asked to reveal who is leaking this information."

A decision was made not to name in this story the two individuals who were asked to plead guilty because they did not do so; they have not been charged in the case; and because some of those involved in the case say that the evidence against them is scant. However, the unsuccessful attempt to gain guilty pleas is significant because it makes it much more likely that reporters for the New York Times will be subpoenaed in the case.

Some investigators said it also served as an example of how political concerns were driving some decisions to be made in the case.

Patrick J. Fitzgerald, the special prosecutor who investigated crimes related to the leaking of former CIA officer Valerie Plame's identity, said during an Oct. 2005 press conference that it is irresponsible for prosecutors to indict people who leak to the press without first compelling testimony from reporters.

"I tell you, I will say this: I do not think that a reporter should be subpoenaed anything close to routinely. It should be an extraordinary case," Fitzgerald said.

"But if you're dealing with a crime and what's different here is the transaction is between a person and a reporter, they're the eyewitness to the crime; if you walk away from that and don't talk to the eyewitness, you are doing a reckless job of either charging someone with a crime that may not turn out to have been committed -- and that frightens me, because there are things that you can only learn from the reporter's testimony that would show you the crime wasn't committed."

Bill Keller, the editor of the New York Times -- whose former reporter Judith Miller was sent to jail for 85 days for initially refusing to disclose her discussions with Vice President then chief of staff I. Lewis (Scooter) Libby-- said via email in a Feb. 2006 story I wrote that the Bush White House was on a campaign to intimidate the press from pursuing certain types of stories.

"I'm not sure journalists fully appreciate the threat confronting us," Keller wrote. "The Times in the eavesdropping case, the Post for its CIA prison stories, and everyone else who has tried to look behind the war on terror."

Keller asserted that "there's sometimes a vindictive tone in the way [administration officials] talk about dragging reporters before grand juries and in the hints that reporters who look too hard into the public's business risk being branded traitors." He warned that journalists are possibly "suffering a bit of subpoena fatigue. Maybe some people are a little intimidated by the way the White House plays the soft-on-terror card. Whatever the reason, I worry that we're not as worried as we should be."